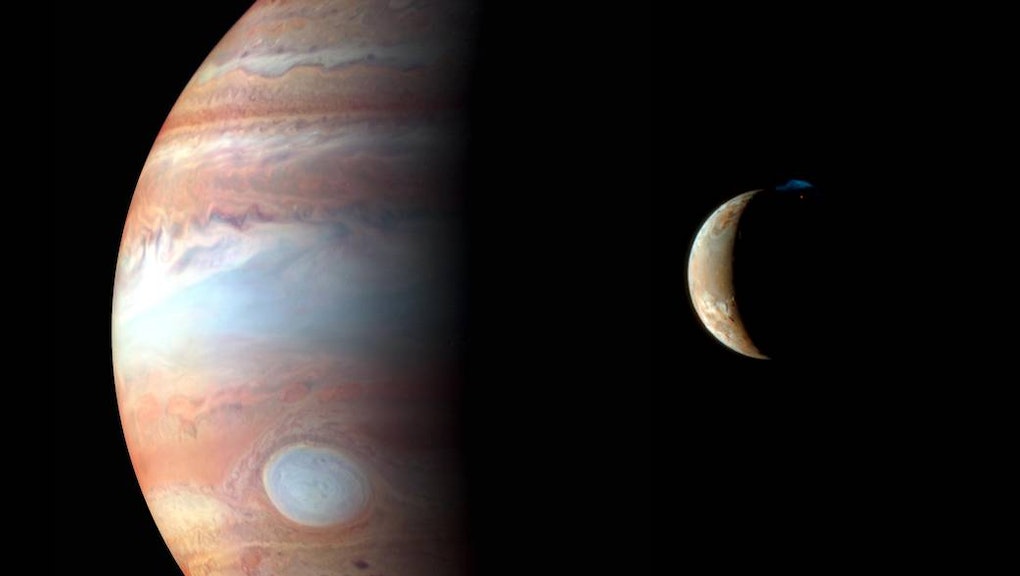 Io's atmosphere collapses and freezes onto the surface once every 1.7 Earth days as Io passes into Jupiter's shadow.

Io's atmosphere is mostly made of sulfur dioxide that come from volcanoes on the moon's surface. Io is regularly eclipsed by Jupiter and passes into the giant planet's shadow during its orbit. When that happens, the temperature on Io drops to minus 270 degrees Fahrenheit. The sulfur dioxide atmosphere freezes and settles as frost on Io's surface.

Once Io emerges from Jupiter's shadow, the moon reheats and sulfur dioxide gas reforms the atmosphere.

"This confirms that Io's atmosphere is in a constant state of collapse and repair, and shows that a large fraction of the atmosphere is supported by sublimation of sulfur dioxide ice," John Spencer, a researcher who participated in the study, said in a statement.

Scientists have long suspected this was happening on Io, but now they have proof. The team used the Gemini telescope to detect heat signatures from Io's collapsing atmosphere.

"This research is the first time scientists have observed this phenomenon directly, improving our understanding of this geologically active moon," Constantine Tsang, lead author on the new study, said in a statement.

The discovery will help us learn more about the Jupiter system, according to the researchers.