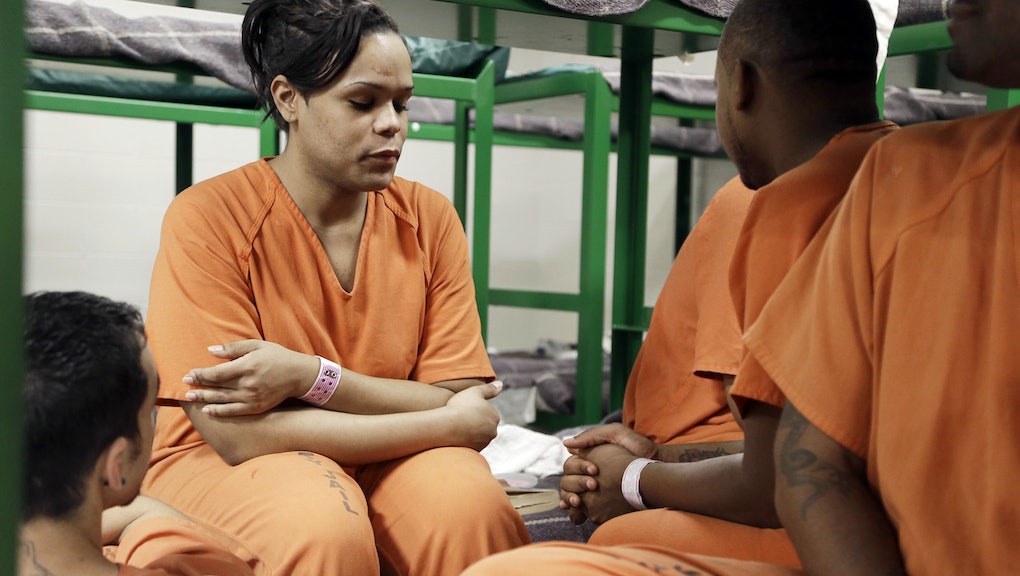 A new report released Monday on LGBTQ people and the U.S. criminal justice system shows the community is overrepresented in jails and prisons. Additionally, LGBTQ people who are young and of color face disproportionate levels of homophobia and transphobia, and are subject to discriminatory laws and arrests that lead to their incarceration.

Analyzed data from U.S. Department of Justice, public polling and a U.S. inmate population survey shows that one in five people in juvenile justice detention facilities identifies as lesbian, gay, bisexual, transgender or questioning. Among them, 85% are racial minorities, according to the study, released by the Center for American Progress.

The report, titled "Unjust: How the Broken Criminal Justice System Fails LGBT People of Color," pegs the overrepresentation of LGBTQ people of color in the criminal justice system to three major factors — racism and anti-LGBTQ stigma in their communities, drug and HIV criminalization laws, and local policing priorities that result in racial profiling.

"Whether they are interacting with law enforcement, going to court, confined in prisons or jails, or preparing for reentry into society, the story is the same: LGBT people of color face an extraordinarily high risk of discriminatory treatment and abuse in our criminal justice system," Ineke Mushovic, executive director of the Movement Advancement Project, said in a statement about the data analysis. MAP and seven other criminal justice reform and LGBTQ advocacy organizations partnered with the Center for America on the report.

The report's focus on LGBTQ people of color was deliberate, given the most recent polling on this population and what federal data reveals. A 2012 Gallup survey of U.S. adults revealed that 33% of adults who identified as LGBTQ were people of color. People of color and women were also more likely than whites to identify as such, according to the survey results.

LGBTQ overrepresentation in the criminal justice system — they accounted for 7.9% of the U.S. jail and prison population in 2011-2012, but just 3.4% of the overall U.S population — is a reflection of laws that criminalize their identity and behaviors, stated the report.

For example, HIV criminalization laws, which penalize behaviors of LGBTQ and non-LGBTQ people living with HIV, even if their behavior carries no risk of transmitting or exposing the uninfected to the virus, were a response to the health crisis in the 1980s and 1990s. More recent laws, such as North Carolina's 2016 bathroom bill restricting public bathroom access to the gender marked on an individual's birth certificate, also present a threat of incarceration for those who are transgender or gender nonconforming.

Other roadblocks abound, from the difficulty of accessing legal counsel in courts to the lack of support for those reentering society after incarceration. As a result, a generation of young LGBTQ people of color are at risk of being lost to a flawed justice system, Isaiah Wilson, external affairs manager of the National Black Justice Coalition, said in a statement.

"Statistically, it is quite clear that the criminal justice system has prospered from the disproportionate impact it has had on black and brown people," he said.