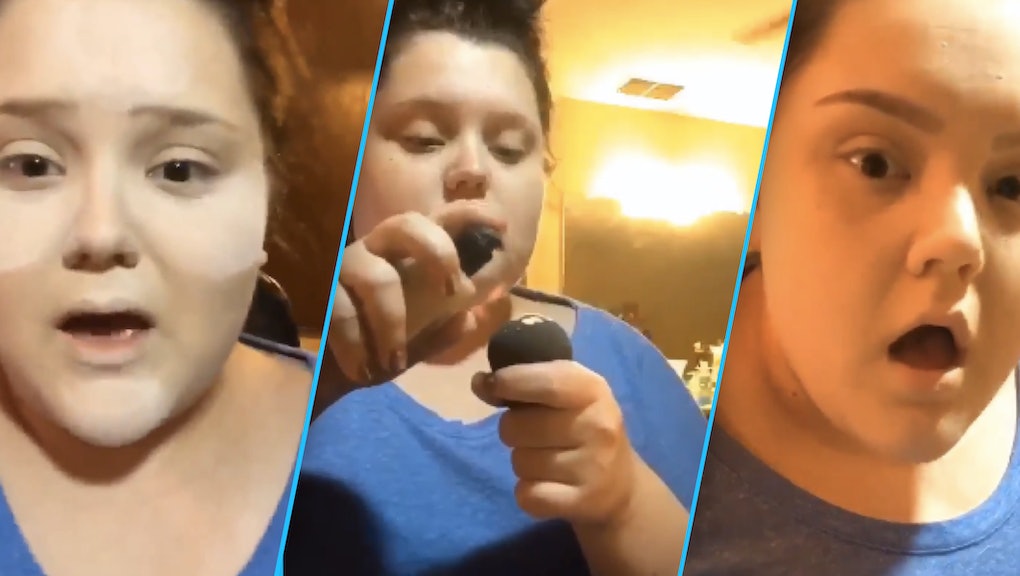 Imagine if the thousands of makeup tutorials on YouTube actually discussed the real struggles of using makeup — like the moment you're faced with 10 salespeople at Sephora trying to convince you to buy their products, or how difficult it is to replicate anything you've seen professionals do.

Look no further, because Twitter user morgaaanhanbery has done just this in one hilarious two-minute video.

"So here is my bullshit makeup tutorial that I couldn't stay serious in, if you actually watch this then I FW you," she captioned the clip, which has been retweeted over 54,000 times since it was uploaded on Sunday.

Similar to other tutorials found on the web, she explains the steps of her makeup routine, starting with her foundation — and then she adds a little extra commentary.

"Shake your foundation, and I am using the NARS Luminous, I don't fucking know, the guy at Sephora talked me into buying it," she said. "We're just going to pump this shit. I don't know how much I'm pumping I'm just like going psycho on my face."

Next up is the powder. "So now like when you look, um, yellow," she explained. "I don't know, I just see it in the tutorials and I think I know how to do shit but I really don't." Same.

This is followed by concealer, some "baking," and brushing of the bitches, er, eyebrows, which leads to a revelation. "Do I think I am a makeup artist?" she asked herself. "No," she replies.

And then her Too Faced chocolate bar eyeshadow palette falls on her hand and the internet is reminded that not all tutorials are as seamless as they might appear.

"You know I like chocolate," she says. "And I'm not talking about the candy." After a beat she adds, "I need God."

Then she was forced to pause her routine because she thought someone was breaking into her house. Add that to the list of things you don't see in other vloggers' videos.

"Okay, I'll be right back someone is peeing," she said.

She continues the video, without letting viewers know if she was safe, and applies highlighter. "Then we are going to take this MAC 43," she says. "Just kidding it's like some brush I got off some cheap ass website."

And the internet can't seem to get enough of this relatable, LOL-worthy video.

Take note beauty vloggers, all makeup tutorials should end with a mini dance session like Morgan's did.