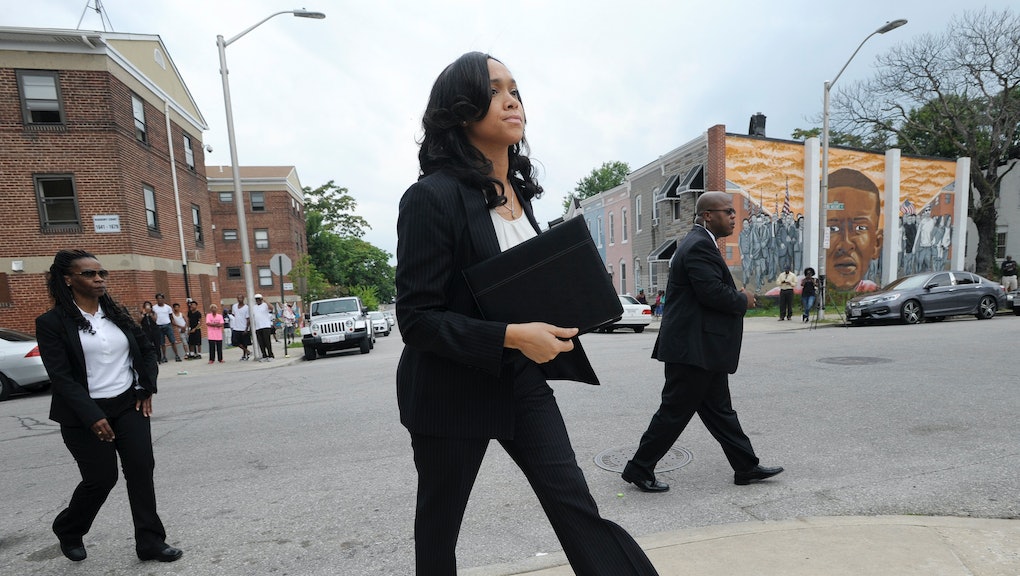 When Baltimore City state's attorney Marilyn Mosby filed criminal charges against six local police officers who arrested Freddie Gray last year, she said she believed the officers were negligent in failing to buckle the 25-year-old into a police van before the rough ride that led to his death.

After bench trial acquittals for three of the officers and a mistrial declared for a fourth, Mosby dropped the charges against the two remaining officers.

But in the Justice Department's 163-page report, which found discriminatory and unconstitutional policing by the Baltimore Police Department, federal officials rip the Baltimore police department for routinely failing to "properly secure arrestees in transport vehicle" and not keeping paddy wagon seatbelt equipment up-to-date. This is the very allegation that Mosby made, and that a coroner said made Gray's death a homicide.

Here's the excerpt from the DOJ's report:

We also examined BPD's transportation of detainees, but were unable to make a finding due to a lack of available data. We were unable to secure reliable records from either BPD or the jail regarding injuries sustained during transport or any recordings. Nonetheless, we found evidence that BPD: (1) routinely fails to properly secure arrestees in transport vehicles; (2) needs to continue to update its transport equipment to protect arrestees during transport; (3) fails to keep necessary records; and (4) must implement more robust auditing and monitoring systems to ensure that its transport policies and training are followed.

Assistant Attorney General Vanita Gupta, who heads the DOJ civil rights division, made it clear during a press conference Wednesday that the federal investigation did not look into the specific circumstance of the Gray case. But, given the DOJ's scathing indictment of the department arrestee transport practices, was Mosby right to assert that Baltimore officers had done something seriously wrong in Gray's arrest?

Mosby sure seems to suggest as much in a statement she released preemptively on Tuesday.

"My office looks forward to reviewing the Department of Justice's civil rights investigation into the Baltimore City Police Department, but the report will likely confirm what many in our city already know or have experienced firsthand," the statement read.

Baltimore Mayor Stephanie Rawlings-Blake and city police Commissioner Kevin Davis said Wednesday that they were optimistic that the issues cited by the DOJ would be addressed through a handful of reforms instituted prior to the report's release. For instance, the mayor said the Baltimore Police Department had already begun updating police vans and fitting them with inside cameras.

The Baltimore Fraternal Order of Police Lodge 3, the city's local police union, did not immediately respond to a request for comment Wednesday. Union leaders had been publicly critical of Mosby for pursuing the charges against the six officers, and blasted her for suggesting officers colluded to hinder her office's investigation into Gray's death.

Mosby, however, feels her prosecution made a difference: "Since the death of Freddie Gray, a number of reforms have been put in place as a result of the prosecution of the six police officers."