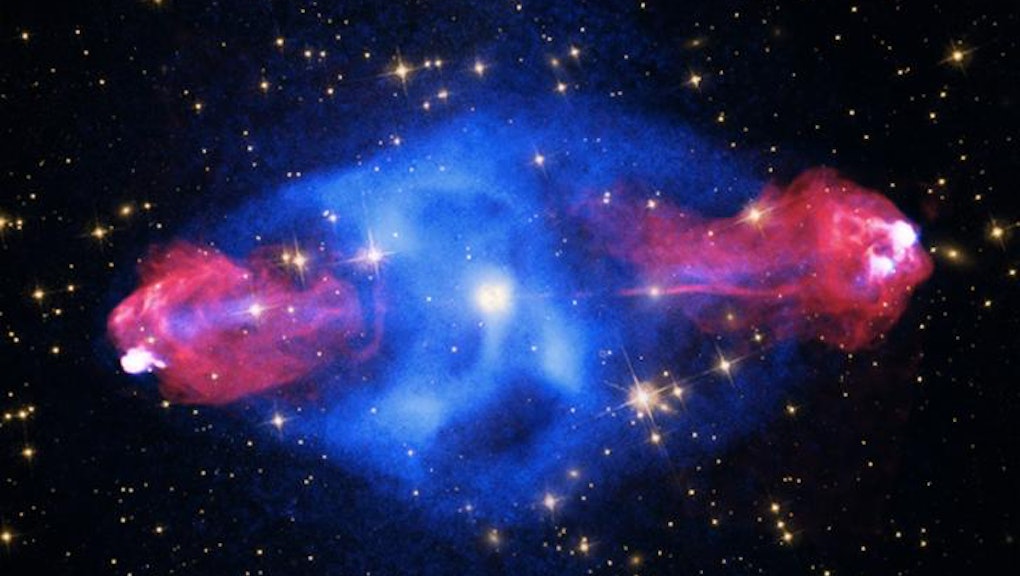 Astronomers are starting to unravel the mysteries behind one of the brightest sources of radio waves we've ever seen.

Researchers used the CanariCam telescope on the Canary Islands to peer at a supermassive black hole at the center of an elliptical galaxy called Cygnus A, which sits about 600 million light-years away. The black hole is actively sucking in material, and two powerful beams of light are shooting from the center of the galaxy all the way to the edge and beyond.

In a new study, scientists were able to get a clear picture of the jets by using polarimetry to filter out all the light that isn't influenced by magnetic fields coming from the galaxy's center.

Their observations show that the plasma that's getting ejected by the galaxy's center is spiraling along these magnetic fields.

"This gives us a much higher contrast when we observe the jets and the dust in the galaxy, while studying the influence of the magnetic field on both of them," Enrique López Rodríguez, lead author of the new study, said in a statement.

Until now, scientists had trouble getting a good look at Cygnus A because it's wrapped in a huge cloud of dust that visible light cannot penetrate. CanariCam can see in the middle infrared wavelength range, which means it can pierce through all the dust to create a more complete picture.

The research is giving scientists a clearer picture of what the magnetic field around a black hole looks like.