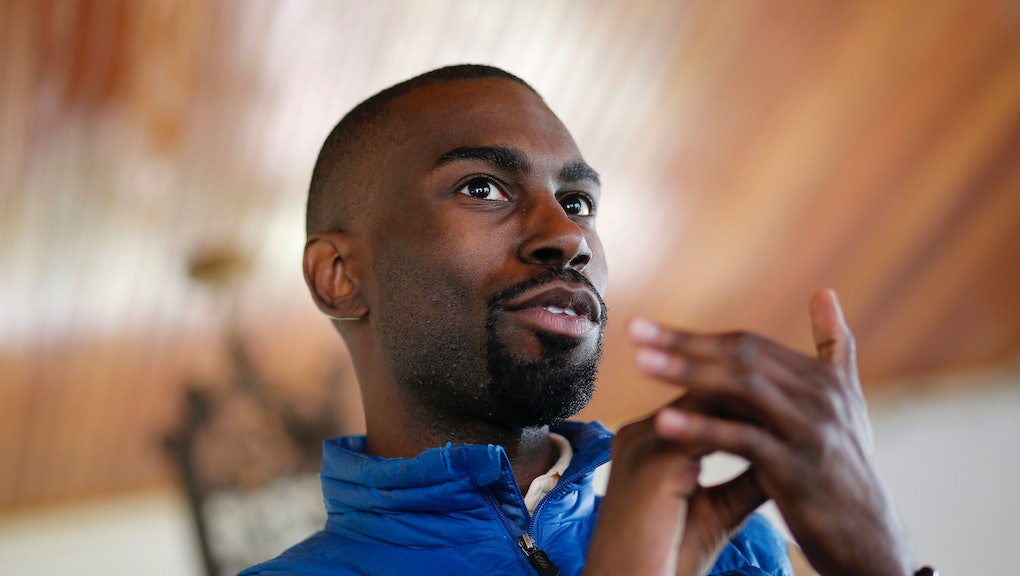 DeRay McKesson is bringing his brand of social media-driven black activism to the world of academia.

McKesson, 31, was recently announced as one of seven fellows at the University of Chicago's Institute of Politics. Other awardees include longtime GOP strategists Lisel Hickey and Kirsten Kukowski and Michael Morell, former acting director of the Central Intelligence Agency.

"[The University of Chicago] is an incredible learning community," McKesson said about the seven-week fellowship. "I'm excited about sharing, teaching and being pushed to think about this work in a different way."

"At a time of such national and international turmoil, from police violence in this country to the threat of ISIS abroad, we are fortunate to have this group of Fellows here to engage our students on a wide range of issues," Axelrod said. "And with the presidential election only a few months away, the chance to hear from experienced strategists is one that I know our students will relish."

McKesson and other fellows will hold public forums and teach four-to-eight week seminars, which are targeted toward University of Chicago undergrads but also open to the community at large (registration begins on the Institute of Politics's website in September; the seminar itself begins in October). McKesson's seminar series will be focused on social justice, social media and organizing. McKesson has previously served as a guest lecturer at Yale's School of Divinity.

"It's a range of things," McKesson said about what will be covered in his seminar. "The seminars range from talking about digital organizing to protest to policy solutions to the importance of public education in education reform."

McKesson emerged as a nationally recognized voice on black activism during protests in Ferguson following the death of Mike Brown in 2014. A trained educator who held administrative positions in school districts in Minneapolis and his hometown of Baltimore, McKesson famously quit his job, drove to Ferguson and began live-tweeting protesters' confrontations with police.

Along the way he allied himself with other young, media-savvy black activists Johnetta Elzie, Samuel Sinyangwe and Brittany Packnett. In 2015, the group released Campaign Zero, a policy platform aimed at eliminating police violence. The platform helped earn him an invitation to the White House to meet with President Barack Obama and his Task Force on 21st Century Policing in 2016.

His tweets, on-camera interviews and unique brand — his ubiquitous blue Patagonia vest even has its own Twitter account, @deraysvest — earned him hundreds of thousands of followers (including Beyoncé), and probably just as many enemies. His movements are routinely documented by right-wing activists and press, who accuse him of being a political agitator. He's also become a controversial figure in black activist circles, criticized for not allying himself closely enough with the movements for which he's become well-known.

But 2016 has proven to be his highest profile year to date. He's explained systemic racism on the Daily Show, made Stephen Colbert check his white privilege and described his activism on the Breakfast Club radio show.

In February, he announced his run for mayor of Baltimore, a race that he eventually lost, but not before becoming the subject of critical profiles in the New York Times Magazine and the Nation. Once his mayoral run ended in June, he was named interim chief human capital officer by Baltimore Schools CEO Sonja Santelisis. That temporary position lasts through the fall.

In July, McKesson was arrested in Baton Rogue, Louisiana, while protesting the police shooting of Alton Sterling. He has since filed a federal civil rights lawsuit against that police department and its chief, accusing it of violating his and 200 other people's constitutional right to protest. That suit is seeking class action status.

Now, at the University of Chicago, McKesson will be joining an institution that's played a unique role in incubating a new era of black activism. The school's Center for the Study of Race, Politics, and Culture houses the Black Youth Project, a national research project focused on black millennials and launched in 2004 by Professor Cathy Cohen. The group held a convening of 100 young activists in 2013 in Chicago, which was spurred to action by the acquittal of George Zimmerman in the death of Trayvon Martin to start a group called Black Youth Project 100.

"All of the commitments that I've made to push systems and structures, my commitment to kids, those are real," McKesson said. "Being in places that challenge the way I think about the world is also real."