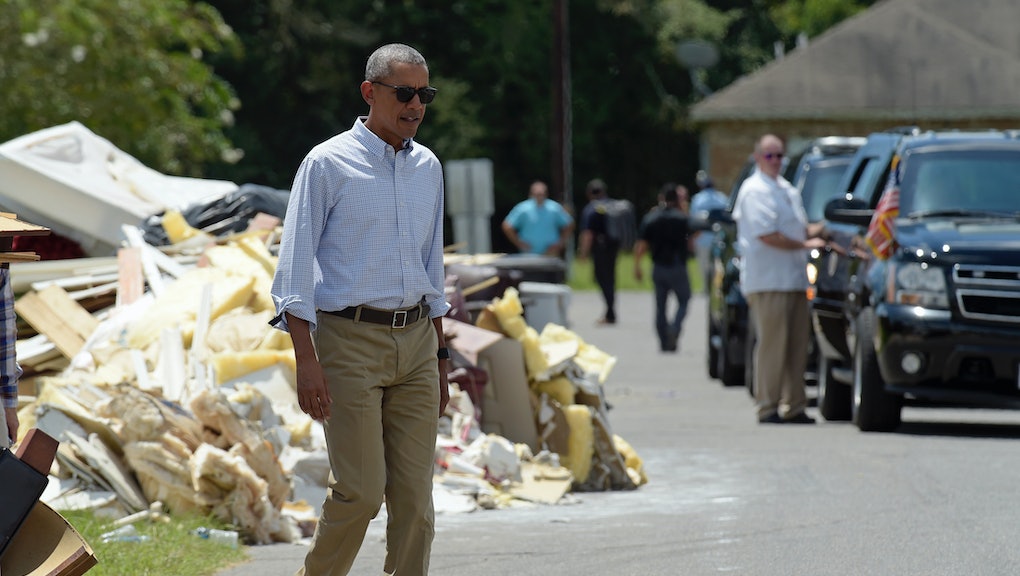 Obama met with Alton Sterling's family, but these activists say it's too little, too late

Over the first seven years of his time in the White House, President Barack Obama never officially met with relatives of black people killed by police. But he had, on a few occasions, comforted the families of officers who died in the line of duty.

This has been some activists' gripe with the nation's first African-American president – especially one who enjoyed years of overwhelming support and approval from the black community.  Some said he was failing to match his words of sympathy for black families with an in-person, public show of support.

That changed on Tuesday... sort of. The White House confirmed that Obama privately met with and consoled the family of Alton Sterling — the black man whose fatal police shooting in Baton Rouge, Louisiana, sparked protests and scores of arrests in July.

Although no details have emerged about what was said in the meeting, some activists said Obama's gesture, while symbolically meaningful, came a little too late.

Grieving black families need validation, and they need it from somebody who's respected. Frequently, these families are simultaneously grieving and defending their loved ones against character assassination by media and local officials, without the broader support of their communities, civil rights attorney Judith Browne Dianis said.

"The symbolism of him meeting with the [Sterling] family is important, because it's showing that at the highest level of this country there is empathy for black folks who are grieving over deaths at the hands of police," Dianis, executive director of the Washington, D.C.-based Advancement Project, said in an interview, adding that "Too many of the people who have been killed [by police] have been criminalized, villainized and dehumanized."

Still, an earlier acknowledgement by Obama of the humanity of the victims and families "would have been important," she said.

Organizers in the Black Lives Matter network and the Movement for Black Lives say the president's actions don't go far enough. They've met with Obama to discuss their platform, which includes a call for divestment in policing and a targeted investment in the economic and social well-being of African-Americans. Obama meeting with victims of police violence is not part of that platform, said Samantha Master, communications co-chair for the D.C. chapter of Black Youth Project 100, a national BLM affiliate. Though meeting with families is a kind gesture, it doesn't address systematic problems that require legislation solution.

"I imagine it's deeply comforting for the family – we don't want to take anything away from that," Master said in a phone interview. "But it's also deeply insufficient to address the concerns of black people who are being killed and harassed by state agents, including law enforcement."

According to a White House press pool report about Obama's trip to Louisiana, the president met for nearly 25 minutes with the Sterlings and the families of the Baton Rouge officers who had been killed in an ambush nearly two weeks after Sterling's death. Obama also toured areas of Louisiana that had been badly damaged by recent floods.

Sterling was killed July 5 outside a convenience store in Baton Rouge, during an encounter with two officers who responded to a report that Sterling threatened someone with a gun. The incident was caught on police body cameras and on bystanders' smartphones.

Sterling was the 114th known black man killed by police in the U.S. in 2016, according to a tally kept by the Washington Post. His shooting sparked protests, including a demonstration in Texas that ended shortly before a lone gunman killed five Dallas police officers on July 7.

For the president, addressing police violence has been a balancing act. Obama has avoided discussing the specifics of police shooting cases, as to not be seen interfering with a law enforcement investigation. He's also been unequivocal in his support for officers, urging the public to avoid seeing perceived police misconduct as endemic to all police departments.

There have been moments when the president publicly showed empathy for African-Americans touched by tragedies. Obama acknowledged the death of Trayvon Martin by saying that, if he had a son, he would have looked like the black teen fatally shot in 2012 by George Zimmerman. More recently, Obama gave a stirring eulogy for the pastor of the church attacked in 2015 by professed white supremacist Dylann Roof in Charleston, South Carolina.

At a memorial services for the Dallas officers on July 12, Obama addressed the mounting tensions between the black community and police.

"When African-Americans from all walks of life, from different communities across the country, voice a growing despair over what they perceive to be unequal treatment... we cannot simply turn away and dismiss those in peaceful protest as troublemakers or paranoid," the president said.

Dianis, whose tenure at the Advancement Project has included meetings at the White House on issues of social and economic inequality, said she sympathizes with people who are critical of Obama.

"Some think it's a day late and a dollar short," she said. "At the end of the day, no president does everything we want."