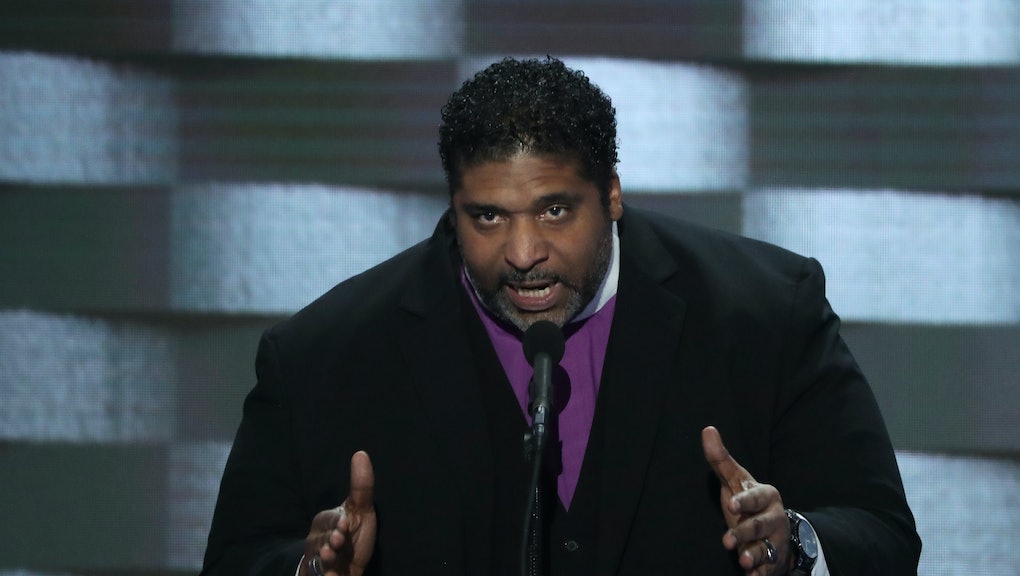 NEW YORK CITY — William Barber II, a black civil rights leader and preacher who hails from the state of North Carolina, is revving up a crusade against racism and inequality in the U.S.

If the name doesn't ring a bell, he's the Christian minister who stirred the Democratic National Convention on July 28 by imploring delegates to reject hate speech and revive "the heart of democracy" in the U.S. Since then, he has seen victory in the campaign he led against voter suppression targeting blacks in his state.

But he's not done pushing that message of vigilance against hatred and discrimination.

On the heels of these events, Barber and several of his faith community colleagues gathered on Thursday to call out a theological crisis. It's a moment requiring men and women of the cloth — Jews, Muslims, Christians and those of other religions — to unequivocally condemn vicious and divisive rhetoric and policies that go against the tenets of their faith.

Barber, 53, emerged in the last few years as a national voice of reason against discrimination and inequities for people of color. These issues have been omnipresent in discourse of the 2016 presidential election, which includes calls for a ban on Muslim immigration, disparagement of Latinos and a rise of white nationalism.

Republican candidate Donald Trump has been emblematic of the problem, Barber said. But Democrats also should not get the benefit of the doubt simply because their rhetoric doesn't sound like Trump's.

"After a year of racially charged speeches and regressive proposals, masterfully fanning white fear, Mr. Trump wants to convince us that he's not a racist," Barber said during the press conference. It's absurd when Trump says that African Americans — who disproportionately experience high youth unemployment, as well as income disparities and educational achievement gaps in comparison to whites — have nothing to lose by supporting his racist politics, he added.

"When we hear Trump say what do we have to lose, I immediately think of all the things that African Americans have fought for and won with our allies," Barber said. "The question itself is an insult to black people... and justice thinking people in America."

Barber said the solution is looking beyond partisanship and dismantling the myths about who is poor and disadvantaged in the U.S. It's not just black people who stand to lose if social benefits like food stamps and family paid leave are scaled back, but poor whites, too. Both Republican and Democratic policies can have racially disparate effects, he said.

"What causes a candidate to only talk about poverty as though it's a black issue," Barber asked rhetorically. "What causes you to elect politicians who vote against the very programs that help your community? What myth has a hold on the American psyche?"

"We need to have a grown up conversation about that," he added.