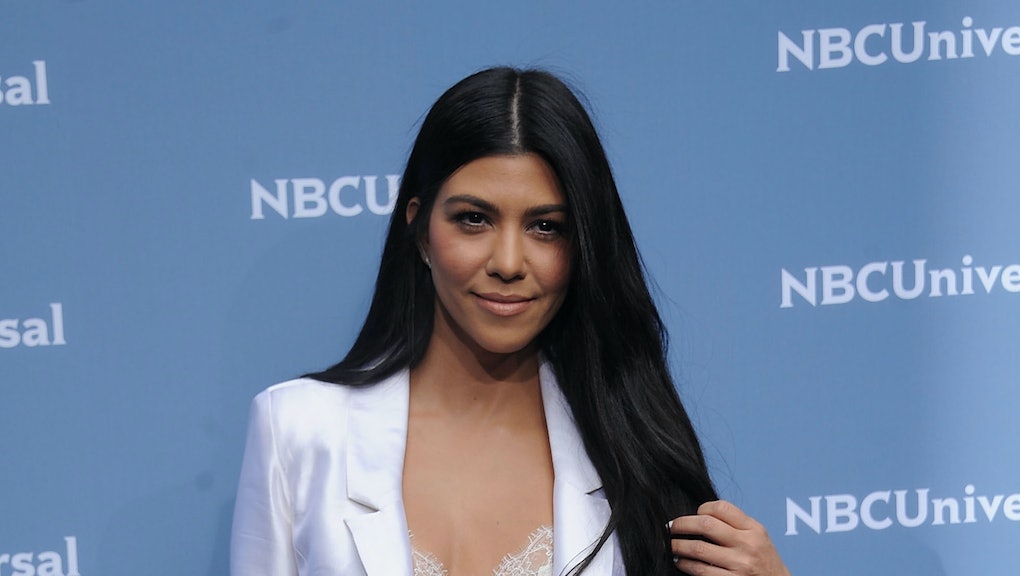 During an episode of Keeping Up With the Kardashians that first aired back in June, Kris Jenner asked her oldest daughter Kourtney Kardashian if she looked fat. Kourtney's response to her mom's inquiry? "Don't use that word in front of my daughter, please."

While the conversation was brief, with Jenner responding merely "OK," many publications, from Yahoo to HelloGiggles, praised the mom of three for deeply caring about her 4-year-old daughter's body image.

In a new interview for the the October issue of Cosmopolitan, Kourtney further addressed this specific scene. "There are so many conversations that we have without thinking the kids are listening," she said to the magazine's deputy editor. "I just don't want to start getting anybody self-conscious. They say if a mother is confident about her body that the daughters are way more likely to not have eating disorders."

She continued, "I'm fine about my body but I'll notice little things. If I'm like, Ugh, I hate this outfit! I'm changing! My daughter will try on tons of outfits before she's happy."

The message Kourtney is likely trying to send to her daughter and other mothers, that young girls shouldn't have to worry about their weight or how they look in certain outfits, is a necessary one. After all, a recent study from the Professional Association for Childcare and Early Years revealed that children as young as three years old have body image issues.

"By the age of 3 or 4, some children have already pretty much begun to make up their minds (and even hold strong views) about how bodies should look," Dr. Jacqueline Harding, an adviser to the research group, told the Telegraph.

And Kourtney also isn't wrong about the mother/daughter/body relationship. In 2013, Dr. Leslie A Sim, the clinical director of Mayo Clinic's eating disorders program and a child psychologist, told USA Today that "moms are probably the most importance influence on a daughter's body image."

Barbara Greenberg, a child and adolescent psychologist, said in an interview with Yahoo, "I don't think you can raise a young woman to feel good about her body if you can't look in the mirror and feel good about your own."

But as Greenberg mentioned, the issue isn't with the word itself — it's with the negative connotation associated with the word "fat." She says people often equate the word to "unappealing" or "unattractive."

And it's that very reason that there are a slew of body-positive bloggers reclaiming — and redefining — the word fat, something that many hope will help those with low self-esteem.

"Fat acceptance is crucial for all of us, because so many of our body image issues are rooted in the fear of fat," Megan Jayne Crabbe, known by her 277,000 Instagram followers as BodyPosiPanda, said in a blog post. "We live in a world that teaches us that fat is the worst thing you can be... We all need to work together to dismantle that fear, and once we do our self esteem is gonna sky rocket, no matter what size we are. We can reclaim the word fat, we can be respectful of fat culture, we can take our power back."

There is no way to protect young girls from all the negative body image terms frequently used by our society. And someone's self-esteem isn't merely based off of words or classifications. So, perhaps instead of telling Penelope that "fat" is a "bad" word, Kourtney could teach her a new meaning behind this word and explain that there is more than one ideal of beauty. (Keeping her away from the influx of straight-sized models on the covers of magazines and in advertorials wouldn't hurt either.)

Because, after all, as plus-size model Iskra Lawrence's hashtag reads #EveryBODYisbeautiful, regardless of whether you label someone as "skinny," "fat," "plus size" and/or "curvy."