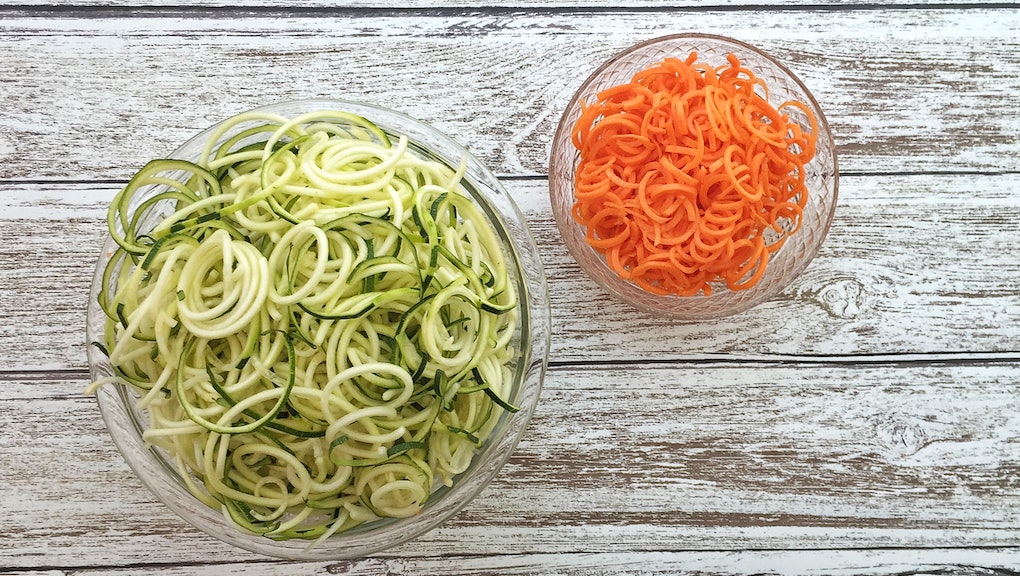 Can so-called "fake junk foods" truly satisfy? Indeed, they can.

The internet is awash in recipes for foods like zucchini noodles and sweet potato toast — dishes that make vegetables the shining star of mealtime instead a humble sidekick to carbs or protein.

But according to one journalist at The Atlantic, this creative spin on how to prepare vegetables, in her opinion, are no more than "fake junk foods."

"Vegetable noodles are just one example of a growing dietary trend of replacement instead of restriction," Bettina Makalintal wrote, positing people tend to eat more even if they opt for low-calorie dishes like zucchini noodles over carb-filled spaghetti.

Common sense would lead us to believe the term refers to an imitation of junk food — defined as "food that is not good for your health because it contains high amounts of fat or sugar," according to Merriam-Webster.

Junk food brings to mind cake, cookies or perhaps pizza. There's definitely a trend of "healthy" junk food on Pinterest, such as banana-based Frostys, date-based chocolate truffles and other desserts made from whole foods instead of dairy and sugar.

But "fake" seems like a misnomer for noodles made from green squash.

Sure, pasta and toast are low in nutritional value if you aren't eating whole grain versions. But does that make them "junk food" — and their vegetable imitations "fake junk food"?

"The veggie sticks that are dried snacks like chips that purport to be a serving of vegetables but are actually just regular potato chips, that's what I would call fake junk food," Barbara J. Rolls, Ph.D., professor and chair of the nutritional sciences department at Penn State, and author of The Ultimate Volumetrics Diet, said in an interview. Rolls has been studying eating and drinking for 50 years, and has studied volume and satiety for roughly 16 years.

One key to weight loss: keeping the volume of food the same. Research shows that over a day or two, people eat a consistent volume of food. "People don't immediately sense calories," she said, noting with weight or volume of food, we register how much is appropriate.

"We've had thousands of eating experiences [over the course of our lifetimes]," Rolls said. Substituting zucchini for pasta will reduce the calorie density, and probably won't cause people to automatically compensate by eating more, she noted.

Researchers haven't investigated the effect of food texture on intake, and Rolls noted it's hard to study texture systematically. But she doesn't condemn zucchini noodles. "We have so many wonderful vegetables — go for it if the food still tastes good," Rolls said.

Do low-cal foods make you overeat?

Maybe you've experienced the phenomenon: You eat a salad for lunch, so you justify the ice cream sundae post-dinnertime. One study published in the International Journal of Research in Marketing found people who ate "light" snacks were more likely to eat 13% more food than people who ate full-fat snacks, Mic previously reported. It all comes down to how people react to the labels, and how they "overcompensate" when they believe a food has fewer calories.

"If you genuinely substitute food that's lower in calories and the food still tastes as good, you don't automatically compensate," she said. Plus, the "Snackwell effect," which the Atlantic writer cites, doesn't necessarily pertain to the zucchini and spaghetti swap. Makalintal writes:

"[...] this trend might inspire the Snackwell effect, named after Nabisco's line of fat-free snacks: dieters tend to eat more of the non-fat or low-calorie version of a food (Snackwell's cookies, for example) than they would the normal version of that food. A 2008 study found that participants ate about 35 percent more when a snack was regarded as healthy than when it was seen as unhealthy.

Zucchini aren't a wheat-based food that've been stripped of some ingredients (in Snackwell's case, it was fat) and replaced with others (sugar) in order to encourage dieters to make a purchase. Zucchini and spaghetti are entirely different foods; the comparison to the low-fat trend of the 80s and 90s doesn't truly fit here.

Rolls' advice: Keep the cooked veggies, ditch the fried or dehydrated ones. The water in vegetables is key to adding weight and volume to your diet and helping you feel full, so quit snacking on dried-out veggie crisps — they don't count a a serving of vegetables.

Zucchini noodles (aka zoodles) might not quash your pasta cravings forever, but hey, they're a creative way to make a meal less caloric. Just don't pretend that slurping zoodles makes you a virtuous god or goddess that deserves to eat an entire chocolate cake, Bruce Bogtrotter-style. Sorry not sorry to cramp your style, dessert rationalizers.