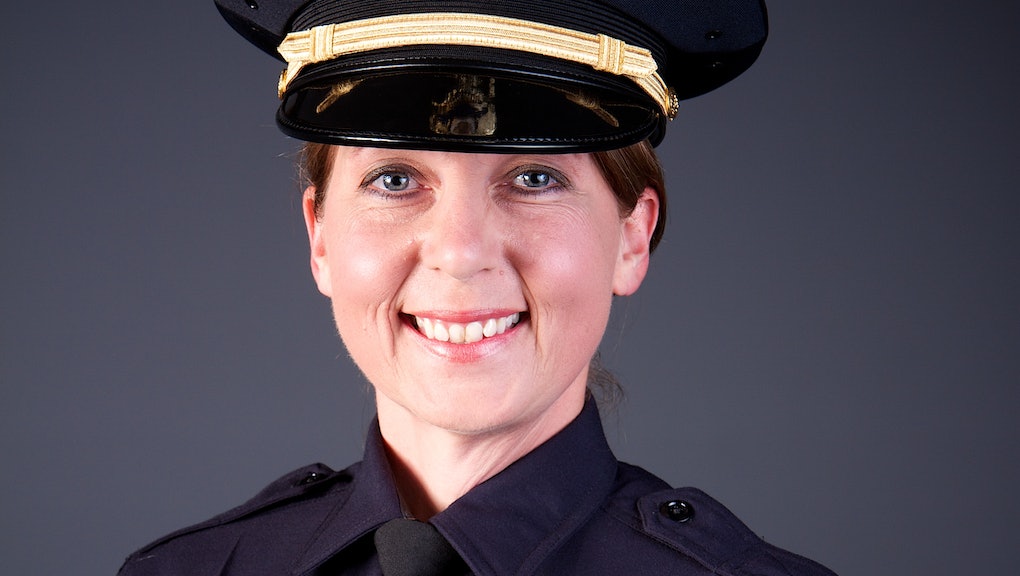 Before Tulsa Police Officer Betty Shelby fatally shot unarmed black motorist Terence Crutcher on Friday, to the Tulsa police department, she didn't appear to be a problem officer. She joined the Tulsa Police Department in 2011, with more than five years of experience as a deputy of the Tulsa County Sheriff's office. Since then, Shelby has received four letters of commendation and an award for merit.

On Thursday, Tulsa County District Attorney Steve Kunzweiler filed a first-degree manslaughter charge  against Shelby, who surrendered to authorities early Friday morning. She has been released on bail.

Shelby's actions against Crutcher, who had reportedly been stranded with his SUV on a north Tulsa road, have the man's family, local residents and civil rights activists demanding the officer's firing and arrest. They're seeking the type of influence that comes with civilian oversight of police, which residents have in cities such as Chicago, Cleveland and Los Angeles.

"With the proliferation of these shootings, especially those that are on video, residents are asking what can they do to ensure their child, particularly their male child, is safe when they leave home," Ronnie Dunn, professor of urban studies at Cleveland State University and police violence expert, told Mic in a phone interview.

"And often, the feeling is that there is nothing they can do," he said.

That's ultimately true in Tulsa, specifically, because there are no forums that allow residents' direct impact on policing. There's no place for residents to ask: Did the Tulsa Police Department ignore signs that Shelby was unfit to serve?

In Tulsa, Dunn said, the community deserves to know how Shelby and other officers are cleared to serve after their uses of excessive or lethal force. The city does publish its use-of-force policy, but a local commission decided against a civilian police review board in 2002, according to Tulsa World. The police force in Tulsa had opposed it.

Ideally, civilian police oversight boards can help ensure that the responsibilities of effective law enforcement are more evenly shared between residents and leaders. But even robust public oversight isn't the entire answer to getting rid of rogue officers, Dunn said.

Studies of civilian police oversight boards — a product of the 1960s civil rights movement that gave appointed residents the authority to investigate, discipline or even fire officers — have proven that they are more symbolic than substantive in stemming misconduct and rooting out bad apples, Dunn said. On the flip side, when there is no transparency in how police leaders process complaints against officers internally, "it raises the concern that there is no real integrity to the complaint system," Dunn added.

Raw video and audio files from the fatal shooting of Crutcher, the 40-year-old father of four and local community college student, captured the incident. The video, taken from a dash cam and from a police helicopter's bird's eye view, shows Shelby and other officers approaching Crutcher, who is walking toward his stalled SUV with his hands raised.

Authorities initially said the man didn't comply with officers' commands to keep his hands up and reached into his vehicle. A lawyer for Shelby told KOTV the video doesn't show the minutes leading up to Shelby firing her weapon, when Crutcher allegedly ignored the officer's commands to stop walking toward his vehicle.

Shelby shot Crutcher, mere moments after another officer, Tyler Turnbough, stunned him with a stun gun. Crutcher was pronounced dead in a nearby hospital. Shelby had been placed on a routine administrative leave, during an investigation by federal and local authorities.

For decades, activists and policing reform advocates have been decrying the secrecy around officer personnel records and disciplinary actions. This information is sometimes shielded from the public by law, bolstering the perception that city officials and officers' unions intentionally cover up misconduct and make it more difficult to scrutinize officers. A union contract in Tulsa grants officers the ability to overturn disciplinary decisions and expunge letters of reprimand, among other rights, according to the Black Lives Matter-affiliated policing reform group Campaign Zero.

In August, the Movement for Black Lives, a national coalition of social justice organizations, released a policy platform that called for the "direct democratic community control of local, state and federal law enforcement agencies."

The lack of civilian oversight "creates significant roadblocks to law enforcement transparency and accountability and prevents any means for communities most impacted by lethal force, excessive force and misconduct to effectively reduce other types of violence," activists asserted in their platform.

In recent years, questions have been raised about the pasts of officers who killed black citizens in high-profile shootings around the nation. Just last week, it was revealed that Bryan Mason, the officer who killed 13-year-old Tyre King in Columbus, Ohio, had been cleared of wrongdoing in the 2012 fatal shooting of a local man who called police for help.

In a press conference on Thursday, Kim Jacobs, chief of the Columbus Division of Police, tried to assure the community that Mason would be evaluated before being potentially allowed to return to duty. "I will not let an officer out on the street if I don't trust them to be capable of doing so," Jacobs said.

Blane Salamoni and Howie Lake, the officers involved in the July 5 shooting death of Alton Sterling in Baton Rouge, Louisiana, had previously been investigated after separate use-of-force incidents. Timothy Loehmann, the officer cleared of wrongdoing in the November 2014 shooting death of 12-year-old Tamir Rice in Cleveland, left his previous police department job after being deemed unfit to serve. While there are no civilian police oversight boards in Baton Rouge or Columbus, there is one in Cleveland.

Dunn, the Cleveland State University professor, hasn't completely written off the role of civilian review boards in disciplining officers. Internal monitoring of police conduct can be mandated by federal authorities, as was done in Ferguson, Missouri, after the August 2014 police shooting death of Michael Brown.

"A lot of the police auditors and monitor positions tend to be more effective in bringing about change in police agencies that have excessive rates of abuse," Dunn said in the phone interview. It's not just about getting an officer fired, but changing policing culture at all levels, he added.

Racial bias or prejudice among officers is also a crucial element in patterns of police misconduct. After Dunn reviewed the Crutcher videos — including the helicopter footage in which the operator is heard describing the man as a "bad dude" — he questioned whether officers' biases make them fearful of black men.

"What does one do to ensure in fact they are safe?" Dunn said. "What can a black male do that will allay that fear? There doesn't seem to be an objective answer at this point."