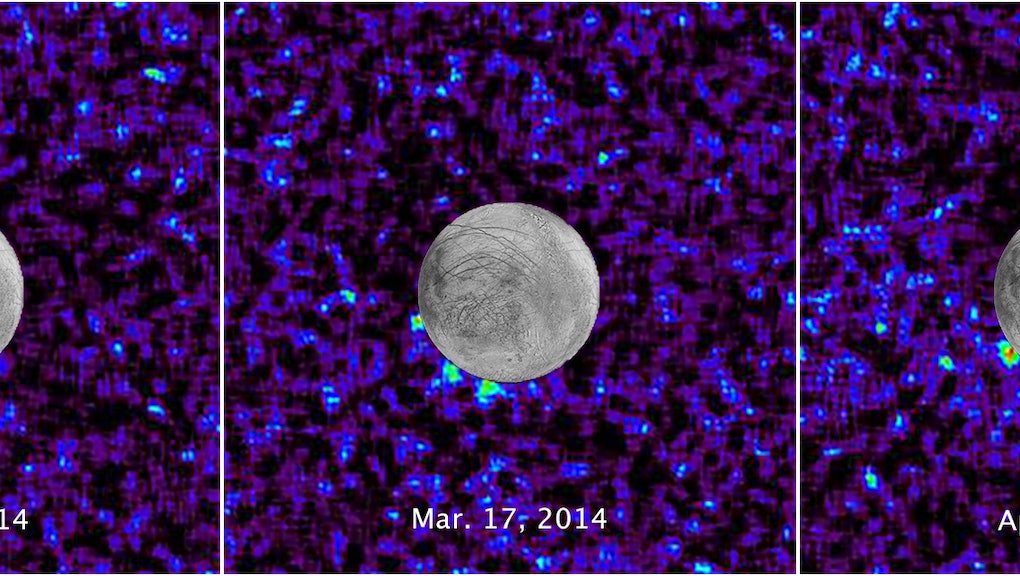 "Europa's ocean is considered to be one of the most promising places that could potentially harbor life in the solar system," NASA scientist Geoff Yoder said in a statement. "These plumes, if they do indeed exist, may provide another way to sample Europa's subsurface."

They were able to spot the silhouette of the plumes when Europa passed in front of Jupiter:

Back in 2012, scientists spotted water vapor over Europa in a Hubble image. They thought the water vapor may have come from a plume of water erupting from the moon's south pole, but they weren't sure. This new research is even clearer evidence that Europa likely has water plumes.

During a press conference on Monday, the researchers said they weren't aware of any other natural causes that could explain the projections they spotted in the Hubble images. The team plans to use the James Webb Space Telescope that will launch in 2018 to confirm the plumes.

Does this mean Europa could support life?

We already knew that below its icy crust, Europa has a subsurface ocean that covers the entire planet. Evidence has been piling up suggesting its ocean is similar to the oceans on Earth. We know our oceans are teeming with life, so that means Europa's ocean might be too.

It's difficult to study an ocean buried under a layer of ice.

If Europa has water plumes that break through the ice, it's possible a spacecraft could fly through one of these plumes and sample the water — much like the Cassini spacecraft that has sampled water plumes coming from Saturn's moon Enceladus. The samples could reveal what kind of chemicals are present in Europa's ocean, and give us an idea of whether or not it could support life.

Maybe now NASA will fast-track a mission to Europa.