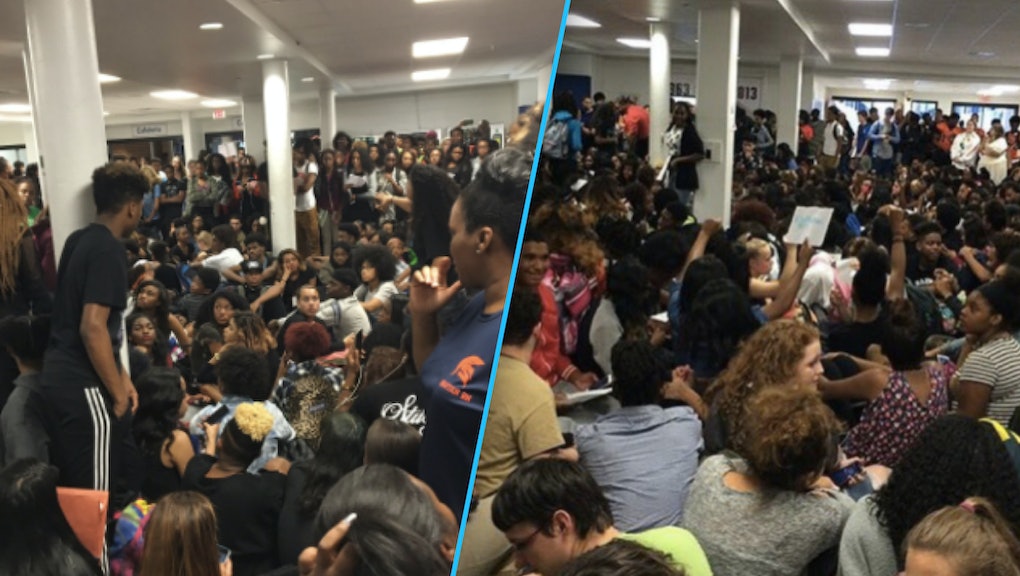 On Friday, a massive group of students at North Springs High School in Sandy Springs, Georgia, staged a sit-in in the school's main hall.

According to multiple Twitter users, and confirmed by the three seniors who planned the sit-in — Grant Showell, Nema Zayed and Sahkiya Olatunji — the peaceful protest was organized in under an hour in response to a white administrator confiscating Black Lives Matter shirts and calling the movement a "terrorist organization."

"Everyone was outraged in our senior group chat," the three students explained in a phone interview. "Word spread fast, if you want something to spread, it will spread and we felt like this was extremely unjust. ... We decided we wanted to do a peaceful sit-in to make a statement that we wouldn't stand for something like this."

In videos posted to Twitter, students can be seen chanting "no justice, no peace" and "Black Lives Matter."

According to the sit-in's organizers, some teachers joined in, while others commanded that the participating students go to class. "The principal didn't come across like he knew what was happening," Showell, Zayed and Olatunji said.

In a cringeworthy video obtained by local news station 11 Alive, the school's principal, Michael Scott Hanson, can be seen struggling to speak with students using a megaphone. "Everything you have heard this morning is factually inaccurate," he says.

He was referring to the alleged removal of the BLM T-shirts. This was further denied by a spokesperson for Fulton County Schools, a network of schools that includes Sandy Springs, when questioned via email by Mic.

"That is a rumor that we have not been able to substantiate," Susan Hale said. "No teacher or administrator told students that BLM was a terrorist organization or asked them to remove their shirts."

In emails that were sent out to the Sandy Springs' students' parents, obtained by Mic, Hanson also stated that the rumor was not true. "We support our students' freedom of expression as long as it does not create a school disruption," he wrote.

In a follow-up email to parents, Hanson said, "we continue to research where the rumor started. As a school we support our student's First Amendment rights."

But one student, Curtis, explained to Fox 5 Atlanta that he did in fact have his shirt taken away.

"When [the administrator] took it, I was just in my tank top," he said. "I can't walk around just in a tank top, so I got a shirt from my friend."

Said another student, Emma Barhoumi: "It just makes me sad that they're trying to say that it didn't happen. We're just trying to prove we can come together and black lives really do matter."

Showell, Zayed and Olatunji said, above anything else, they hope the sit-in can educate both students and school employees about the BLM movement and events, like police brutality and subsequent shootings, happening across the country.

They mentioned that some students have experienced harassment from teachers for not standing during the pledge — something many have begun to do after San Francisco 49ers quarterback Colin Kaepernick decided take a knee during the national anthem at football games to call attention to police violence and injustice in black America.

"Our school is actually extremely diverse, as diverse as it, awareness is at an all time low," they said. "We want to eliminate harassment from teachers and administrators telling us to stand for the pledge... When we take a knee we don't rant or say anything about it class, and a lot of the teachers have decided to voice their opinions about it even though we don't voice ours."

Something they believe might help a lack of awareness? Education in the classroom.

"We have many American history, American government classes that are not all inclusive, that do not teach the entirety of the American history," they said, adding, "For Black Lives Matter to be called a terrorist group, that's just outrageous. That's very, very far."