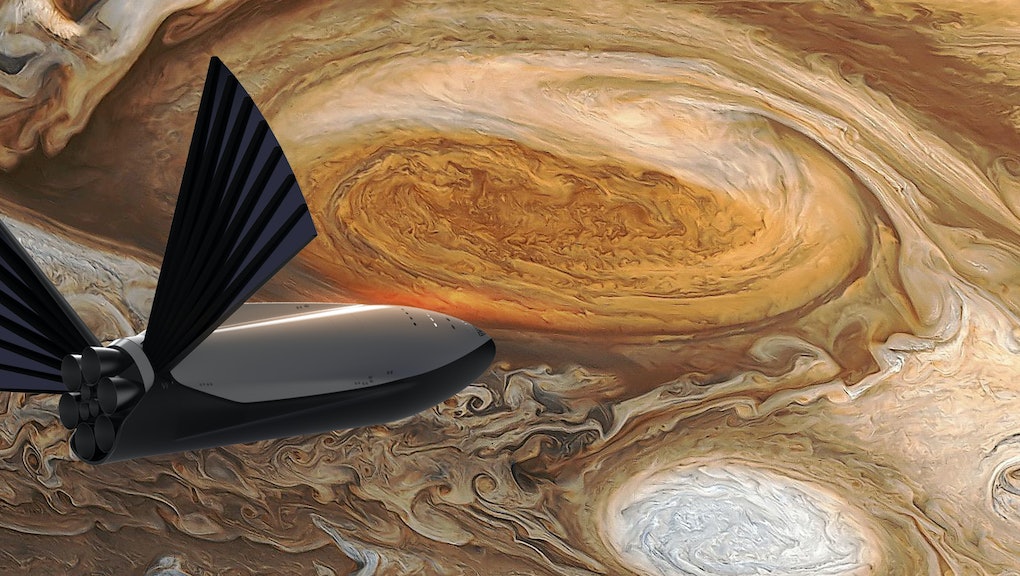 On Tuesday, Elon Musk revealed plans for a giant spacecraft capable of carrying 100 people all the way to Mars. His ultimate goal is to set up a thriving human colony on the red planet. But right now, Musk estimates a ticket on this giant Interplanetary Transport System would run you about $10 billion.

"You can't create a self-sustaining civilization if the ticket price is $10 billion per person," Musk said during a presentation at the International Astronautical Congress on Tuesday. "Our goal is to get it roughly equivalent to cost of a medium house in the United States — about $200,000."

Musk estimates said self-sustaining civilization would require at least 1 million people, according to a piece on Musk published by Aeon in 2014.

The forward-thinking entrepreneur plans to land the first people on the Red Planet as soon as 2024. And there could be 1 million people on the planet within 40 to 100 years, Musk said.

Can Musk really lower the price that quickly?

"Simple answer is no," space policy expert and professor emeritus at George Washington University John Logsdon said in an interview. "Complex answer is maybe in the far future, but not on the time scale set out by Musk."

For his part, Musk outlined a plan during the presentation on Tuesday that he said could lower the cost of getting to Mars by 5,000,000%.

2. Refuel the 100-person spacecraft while it's in orbit. This way, the spacecraft can be smaller, and therefore cheaper to manufacture, because it won't have to carry as much fuel when it launches.

3. Make rocket propellant on Mars for the return trip. In order for the spacecraft to be reusable, it will have to be able to return to Earth. Musk said it's possible to make a methane-based fuel on Mars that will power the spacecraft for its journey back to Earth.

Whether or not all those pieces come together in time to have a million people on Mars within a century remains to be seen. But maybe Musk is more concerned with inspiring people than sticking to a timeline.

"What I want to do here is to make Mars seems possible, to make it seem that it's something we can do in our lifetime," Musk said at the opening of his presentation.