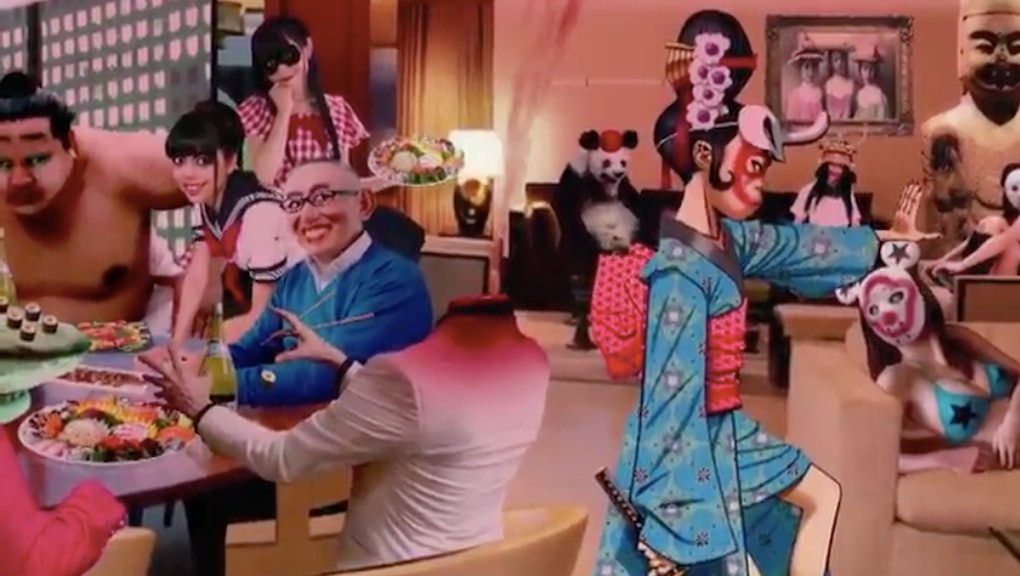 After a long hiatus, Gorillaz has returned to the music world in the most idiosyncratic way possible: with a series of bloody animations and a colorful fantasy storyline. Posted to Twitter in the form of a short story titled The Book of Noodle, the animated tale describes what happened to the band's simian guitarist Noodle following the events described in the group's 2010, Plastic Beach.

In the story, told over 12 tweets, Noodle disguises herself as a geisha in order to decapitate a "shape-shifting devil of unimaginable evil" plaguing Japan. It appears to be setting the stage for the alternative hip-hop group's forthcoming album — its first in six years.

The art puts Jamie Hewlett's grungy, anime-inspired cartoon imagery, which has accompanied every Gorillaz release, back into the spotlight. The lack of focus on the group's visual element led to rumors of a split back in 2012, stemming in part from a Guardian profile of the group's musical leader Damon Albarn.

"It was one of those things," Albarn told the outlet, describing the tensions. "The music and the videos weren't working as well together, but I felt we'd made a really good record, and I was into it. So we went and played it."

With The Book of Noodle the group's visual element seems to be coming back to the fore, though fans may have to wait until 2017 for new music. According to a fan Instagram page, Hewelett described the album as "special, really fuckin' special" and that it "can't be rushed."

Read the full Book of Noodle via the Twitter moment below.