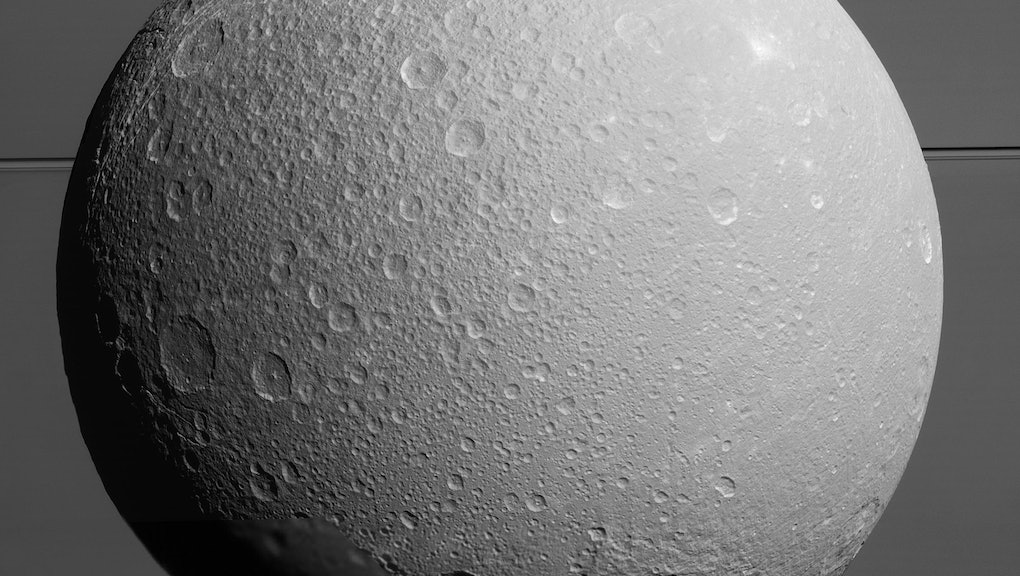 Scientists have spent years fussing over Enceladus and Titan. But there's another moon of Saturn with a giant ocean below its surface, and it's been chilling in the background waiting to be discovered.

New data from the Cassini spacecraft shows Saturn's moon Dione has a vast ocean 100 kilometers below its icy crust. This discovery is important because where we find water, there's a chance we might also find life, according to NASA. So we can add Dione to the growing list of places beyond Earth that might have the right conditions for life.

The new research is published in the Geophysical Research Letters.

Scientists had already used Cassini to study another moon of Saturn called Enceladus. Data from the spacecraft showed Enceladus was experiencing gravity fluctuations that caused a strange wobbling motion as it orbited Saturn, according to the Royal Observatory of Belgium. Scientists concluded that the moon held a planet-wide ocean below its crust. The sloshing subsurface water was causing the wobbling.

Now scientists have observed the same gravity fluctuations on Dione. The fluctuations are much smaller on Dione, which is why researchers think its ocean must be buried so deep beneath the surface.

Dione also seems relatively inactive compared to its neighbor Enceladus. The ocean of Enceladus is much shallower and sometimes erupts in giant geysers that break through the moon's surface:

Scientists haven't seen evidence of these kinds of water plumes on Dione.

The researchers hope a future mission to Saturn will confirm that Dione has an ocean, and tease out whether that ocean could support life.