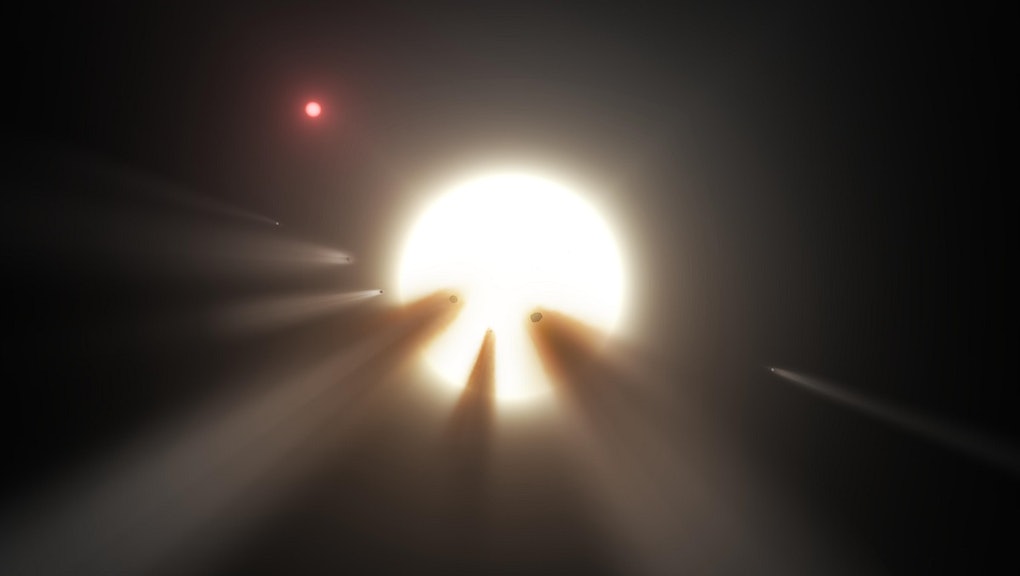 Sometimes, not even a scientist can rule out aliens.

The more we study the star called KIC 8462852, nicknamed "Tabby's star," the more mysterious it becomes. The latest research by astronomers Josh Simon and Ben Montet show Tabby's star has exhibited a strange dimming pattern over a four-year period.

Scientists can't quite rule out that the dimming is caused by alien activity.

Tabby's star made headlines last year when astronomers first noticed some strange dimming around it, and suggested a giant alien megastructure like a Dyson sphere might be responsible. As scientists have continued to study the star, its dimming behavior keeps getting more puzzling.

In October 2015, astronomer Tabetha Boyajian first noticed the star's strange behavior. Observations showed the star experienced periods of random dimming, where its brightness would dip as much as 22%.

In January 2016, another group of scientists found evidence the star's overall brightness had dimmed 20% in the last century.

"This star was already completely unique because of its sporadic dimming episodes," Simon said in a statement. "But now we see that it has other features that are just as strange, both slowly dimming for almost three years and then suddenly getting fainter much more rapidly."

Now scientists are searching for a natural cause that could explain the star's behavior. Some have suggested that a field of comet debris might be passing in front of the star, causing the dimming.

"It's a big challenge to come up with a good explanation for a star doing three different things that have never been seen before," Montet said in the statement. "But these observations will provide an important clue to solving the mystery of KIC 8462852."

Boyajian is planning to use the Las Cumbres Observatory Global Telescope Network to study the star for a full year, according to her Kickstarter campaign. Maybe then we'll have an answer.