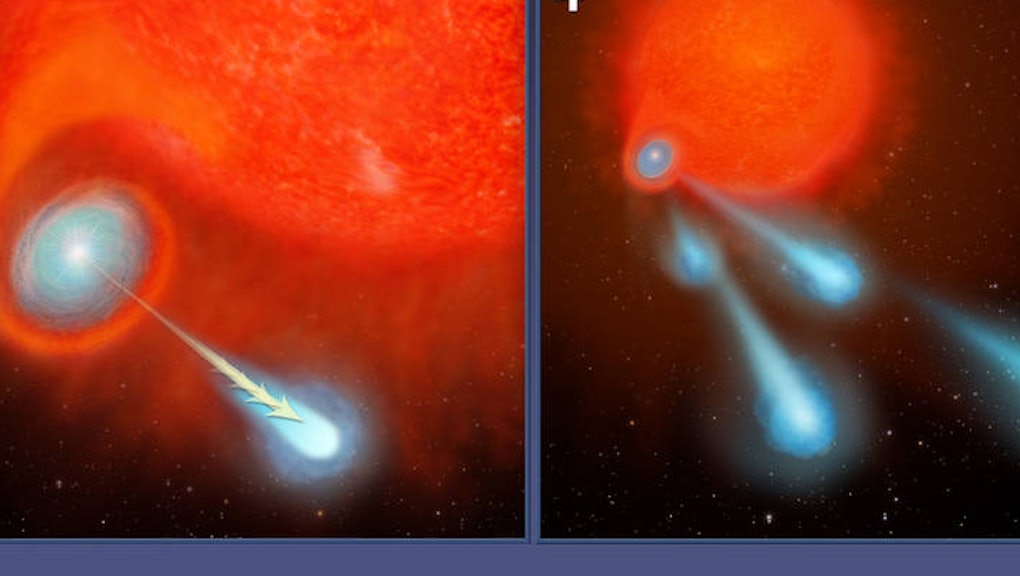 Astronomers using the Hubble space telescope spotted balls of scorching-hot plasma twice the size of Mars streaking through the cosmos.

These giant "stellar cannonballs" have been erupting once every 8.5 years for the last 400 years, the team estimates.

The balls of plasma seem to originate near a star called V Hydrae about 1,200 light-years away. Data shows the plasma blobs are hotter than 17,000 degrees Fahrenheit, or about twice as hot as the surface of the sun, according to a NASA summary of the research.

The researchers traced the blobs like a trail of bubbles through space. As the blobs expand and get farther away from the star, they cool down and we can't spot them in visible light. The farthest clump that we can still see dates back to 1986. But astronomers used a sub-millimeter wavelength telescope and spotted even more distant blobs that date back 400 years, according to NASA.

Their origin is a mystery. The astronomers say it's impossible the plasma balls came from V Hydrae. Instead, they think the plasma came from a "companion star" near V Hydrae that we can't see from Earth.

"As the companion enters the bloated star's outer atmosphere, it gobbles up material," according to NASA. "This material then settles into a disk around the companion, and serves as the launching pad for blobs of plasma, which travel at roughly a half-million miles per hour."

The presence of the plasma blobs also helps explain why astronomers have observed dips in the light coming from V Hydrae. The star's light seems to get temporarily snuffed out every 17 years. Astronomers think the back-and-forth direction of the plasma ejection is to blame. Sometimes the blobs get flung in front of the star and block out its starlight, and sometimes they get flung behind the star.

Researchers want to use Hubble and the Atacama Large Millimeter/submillimeter Array, or ALMA, in Chile to conduct followup observations and figure out where the plasma blobs are coming from.