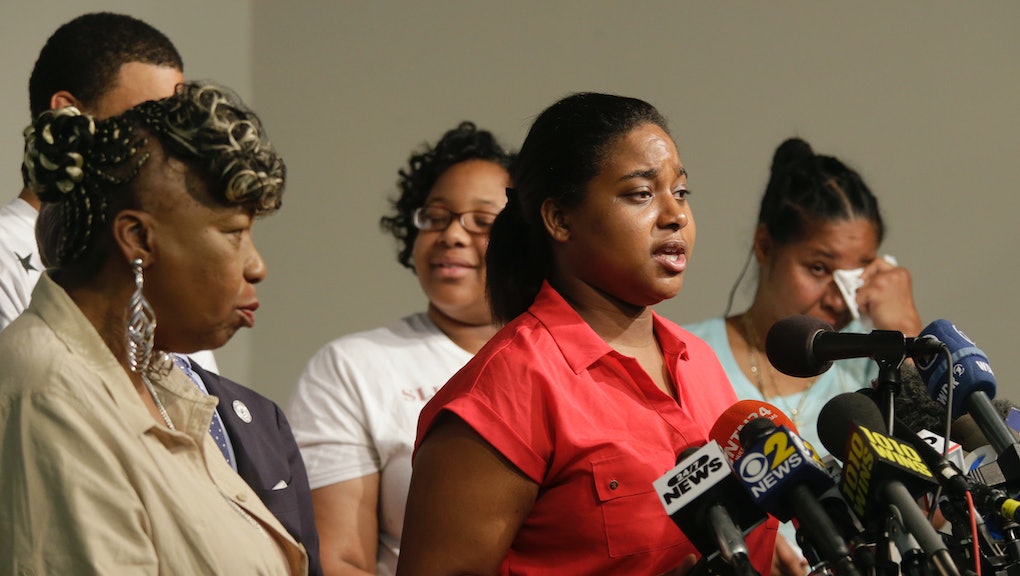 Erica Garner hasn't ever minced her words in expressing dissatisfaction about how federal, state and New York City authorities have handled the investigation of her father's 2014 police chokehold death.

But she is now more hopeful that justice is still possible, following the news that U.S. Department of Justice officials have replaced the FBI agents who reportedly stalled a decision to charge New York police officer Daniel Pantaleo, who held Eric Garner in the chokehold that led to his death.

"This is a small step forward," Erica Garner said in a statement released Wednesday. "I take it as good news that the Justice Department has chosen to replace them."

It has been widely reported that the DOJ is determined to mount a civil rights case against Pantaleo, who had been placed on modified duty and stripped of his badge and gun following the July 2014 incident. Eric Garner, the 43-year-old unarmed black man, died on a Staten Island street corner where New York police officers attempted to arrest him for allegedly selling untaxed cigarettes. Garner was captured on video pleading with Pantaleo, "I can't breathe."

Erica Garner, who has feuded with Mayor Bill de Blasio and even President Barack Obama over her father's case, said the shakeup at the DOJ is promising.

"It's about time that they have an outside set of eyes working on this case, and I'm hopeful justice will be swift and my father's case can be tried," Garner said in the statement.

In December 2014, a New York City grand jury decided against indicting Pantaleo, sparking Black Lives Matter protests across the nation. According to a New York Times report, the New York-based FBI agents who had been reviewing the case disagreed with DOJ civil rights attorneys on the grounds to charge the officer. To mount a civil rights case, the DOJ needs proof that Pantaleo willfully violated Eric Garner's civil rights — or what is known as a "color of law" violation.

Pantaleo, through his lawyer, Stuart London, maintains that he didn't violate Garner's constitutional right against unreasonable seizure or arrest. "This was always a simple street encounter where Officer Pantaleo utilized his NYPD training to subdue an individual," London said, according to the Times.

Pantaleo has also testified that he used the maneuver — which had been banned by the New York Police Department in 1993 — because he feared Garner would push him through the glass window of a convenience store where officers confronted him.

"I've seen a report from Mr. Pantaleo's lawyers saying it would be a miscarriage of justice if he goes to jail because, when he acted against my father, [Pantaleo] was in fear of going through a window," Erica Garner said in the statement. "My response is that if he did go through that window, my dad would still be alive — maybe in jail, but still alive."

In the end, Garner said she wants the outcome of her father's case to be different than those involving Michael Brown in Ferguson, Missouri, and Freddie Gray in Baltimore, where federal authorities have not mounted civil rights charges against police.

"I hope they take their time and get it right this time," she said.