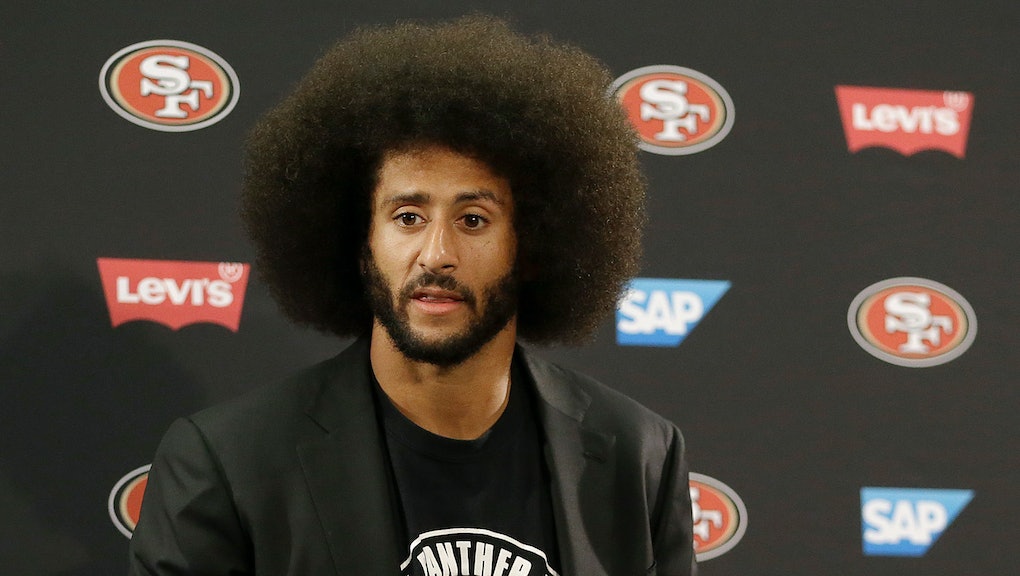 NFL quarterback Colin Kaepernick took his national anthem protest to the next level over the weekend when he held a camp for hundreds of young people of color in Oakland, California.

"We want to teach you today about financial literacy, how you can pursue higher education, how you can be physically fit and healthy," Kaepernick said at the event, according to the New York Daily News. "We will talk about police brutality, and what to do about it, but we also have lawyers, professors, health and fitness experts, because we want you to be able to live the life of your dreams."

He took a page out of the hometown's history to impart these lessons, adapting the the Black Panther Party for Self-Defense's 10-point program for his own "I know my rights" platform.

New York Daily News writer Shaun King was one of a handful of select members of the media in attendance and wrote about the camp in his latest column.

"For the past two months, behind the scenes, Colin Kaepernick and a small group of his friends have been quietly planning this camp for the kids of Oakland, hoping that it can be a model they replicate in cities all over the country." King continues:

Inspired by the Black Panther Party, and their popular 10-point plan, on their 50th anniversary, the camp created 10 rights that each child has the right to know. They were listed on the back of T-shirts given to each camper. They are:

1. We want freedom. We want power to determine the destiny of our Black Community.

2. We want full employment for our people.

3. We want an end to the robbery by the white man of our Black Community.

4. We want decent housing, fit for shelter of human beings.

6. We want all black men to be exempt from military service.

7. We want an immediate end to police brutality and murder of black people.

8. We want freedom for all black men held in federal, state, county and city prisons and jails.

9. We want all black people when brought to trial to be tried in a court by a jury of their peer group or people from their Black Communities, as defined by the Constitution of the United States.

10. We want land, bread, housing, education, clothing, justice and peace. And as our major political objective, a United Nations-supervised plebiscite to be held throughout the black colony in which only black colonial subjects will be allowed to participate for the purpose of determining the will of black people as to their national destiny.

Kaepernick wore a Black Panther Party T-shirt to a post-game press conference on Oct. 23. With this "I know my rights" platform, it's clear that he ain't playin' no games when it comes to justice and equality.