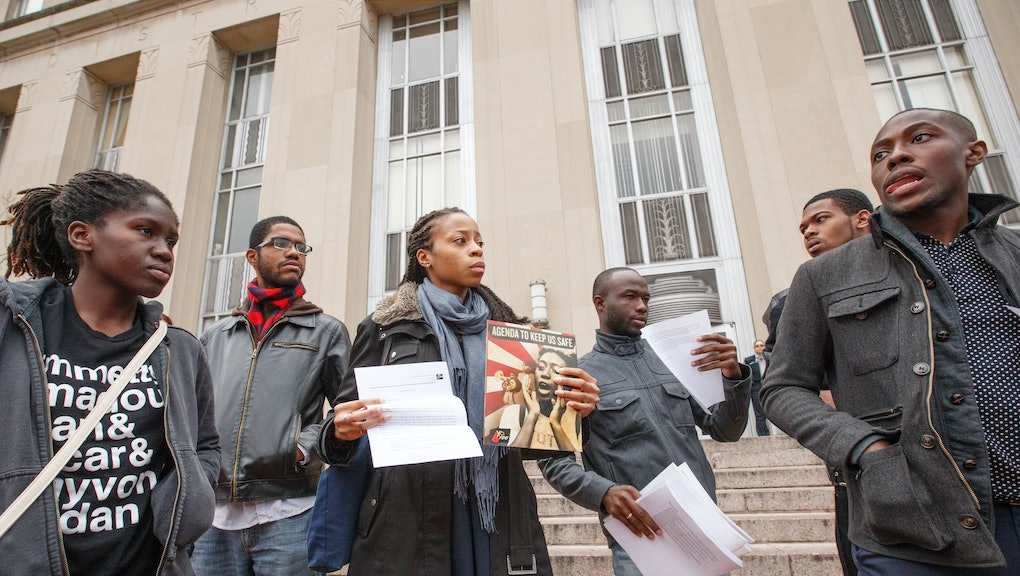 Civic participation has become so fraught for African-Americans that it's even earned its own name: voting while black.

Exactly two years ago, Black Youth Project, a national organizing group for millennials with chapters across the country, released this helpful reminder that voting is one of many tools for participating civically.

These points, adapted from an activist named Mariame Kaba, are just as timely today — summing up the best approach to Election Day: that one can work toward an inclusive democracy in many different ways.

1. Voting will not uproot oppression. Only social movements can do that.

Jessica Pierce, BYP 100's national co-chair, said that Kaba's message was important to share with its members and supporters because it allows them to reframe the conversation about voting from an either/or, good/evil dichotomy.

"If we do want to have the freedom and change we need, it can't be just shutting stuff down," Pierce said. "It has to be thinking statically about the policies we want, [and] holding officials accountable."

The discussion about voting in black communities has been loaded. The Supreme Court dismantled crucial parts of the 1965 Voting Rights Act, landmark legislation that was meant to protect African-Americans from the types of voter intimidation that marked decades of Jim Crow rule in the South. Ironically, it's the exact type of intimidation that Donald Trump is now advocating when he incites his supporters' fears about stolen elections and voter fraud.

But outside of the ability to vote is the utility of it. Whether political power can be gained at the polls has long been a source of tension in black communities, dating back at least to Malcolm X's 1964 "The Ballot or the Bullet" speech.

"The time when white people can come in our community and get us to vote for them so that they can be our political leaders and tell us what to do and what not to do is long gone," X said, advocating a black nationalist philosophy centered around black control of civil, economic, political and cultural life. "By the same token, the time when that same white man, knowing that your eyes are too far open, can send another Negro into the community and get you and me to support him so he can use him to lead us astray — those days are long gone too."

Alongside the emergence of the Movement for Black Lives has been a concurrent conversation about whether young black Americans will and should vote in this year's election. Hillary Clinton's campaign, at least, is deeply worried about voter turnout among young African-Americans. But Pierce, for one, isn't worried.

"We're not buying into these narratives that elections will be won and lost on the backs of black people," she said. "There are so many ways to be involved."