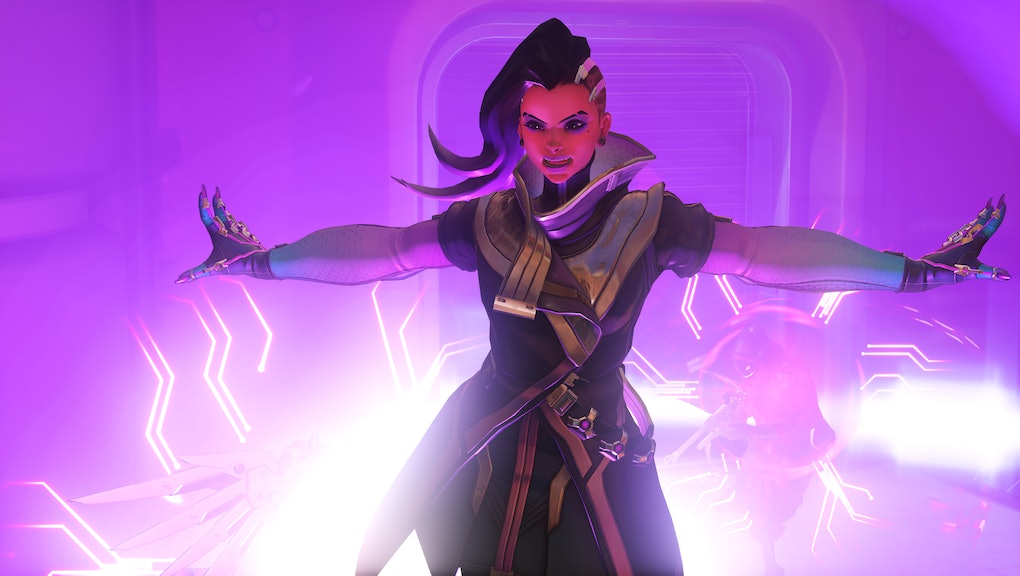 The newest Overwatch character, Mexican cyberpunk hacker Sombra, was revealed at BlizzCon through a brand new animated short. Not too long after, Blizzard released a new trailer that showcases her abilities.

Sombra's hacking and stealth powers are some of the most complicated and nuanced abilities of any Overwatch character thus far. The intricacies of how those powers work are hard to convey through a short trailer, though. So let's discuss.

Here's a basic list of Sombra's abilities, to get you up to speed.

1. Machine Pistol: Sombra's standard attack is a machine pistol that has a relatively large magazine size.

2. Hack: Sombra can temporarily prevent enemies from using abilities. Hack can also be used on specific health packs, rendering them useless to the enemy team for a short time.

3. Thermoptic Camo: This ability makes Sombra invisible for a few seconds, during which time her movement speed is boosted considerably. Attacking, hacking and taking damage will interrupt this effect.

4. Translocator: Sombra can throw a device to which she can teleport instantly for as long as it's active.

5. EMP: Sombra's ultimate ability hacks all enemies around her, as well as destroying nearby shields and barriers.

6. Opportunistic: Though it's not advertised in the trailer, Sombra can see enemies that have less than half their health through walls.

Sombra revealed: The secrets to getting the most out of her abilities

Here are 13 tips for how to get the most out of what Sombra can do, gathered from this Reddit thread and a Sombra gameplay video shown at BlizzCon.

2. The translocator beacon sits in place for up to 15 seconds before disappearing.

3. In addition to rendering it useless to enemies, hacking a health pack makes it regenerate about three times faster than normal.

4. Hacking a health pack lasts a full minute, much longer than the 5 or 6 seconds it lasts on an enemy.

5. Sombra can hack multiple health packs at once, which means that hacking a second health pack does not negate the first one.

7. Sombra gets healing credit for the health packs she hacks.

8. Hacking an enemy reveals the status of their ultimate ability for about 30 seconds — much longer than the 5- or 6-second length of the hack itself.

12. Hacking Lúcio will prevent him from switching songs, but the effect of his current song will persist.

13. Sombra's ultimate ability, EMP, destroys nearby shields and barriers, which includes things like the shields provided by Lúcio's ultimate and the portion of a character's health bar made up of shields. Sorry, Zenyatta and Zarya.

Sombra is expected to hit the public test region this week for those who play Overwatch on PC. Depending on how smoothly the testing process goes, she'll hit the live version of Overwatch a week or so after that.