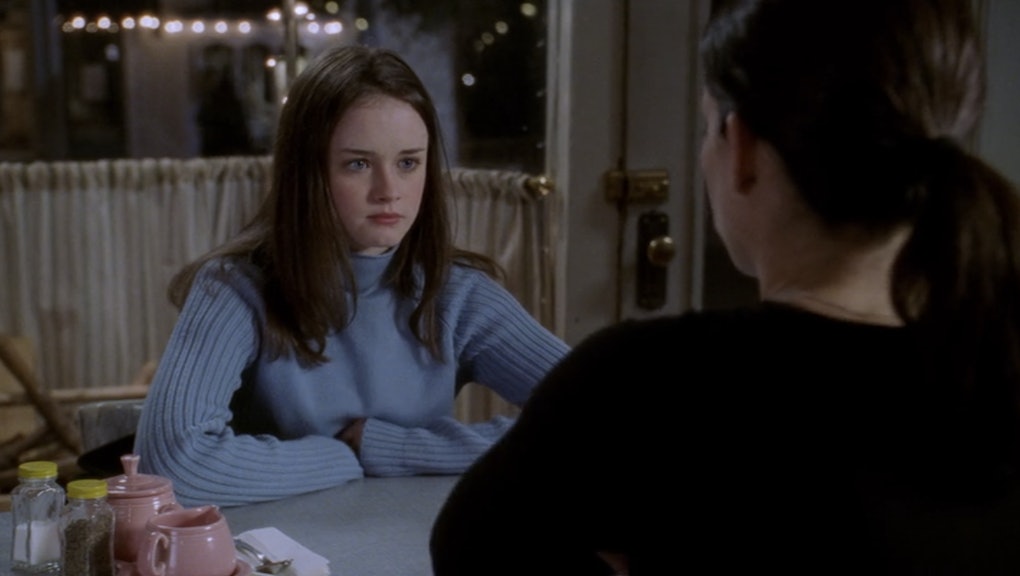 14 weird things you forgot about the 'Gilmore Girls' pilot episode

Anticipation is high for the Netflix premiere of Gilmore Girls: A Year in the Life, which is comprised of four 90-minute episodes and stars most of the show's original cast.

But before sitting down to watch the new episodes, you might want to watch the show's first ever episode that originally aired in 2000.

Though there were 152 more episodes after this one, the pilot laid the groundwork and offered a pretty good sense of what was to come from the rest of the series. And like many other TV show pilots, there were many inconsistencies and easy-to-miss moments.

So with this in mind, we decided to round up 14 moments you probably forgot happened — even if you consider yourself to be a diehard fan.

1. Luke's Diner is located in the middle of a block, and not on its corner

Luke's diner is an everyday spot for Lorelai and Rory, so it only makes sense that this is the location of the first-ever scene. One key difference, however, is where Luke's is. In the pilot, it is seen in the middle of the block. Although true Gilmore Girls fans will know that Luke's is in fact a street corner establishment.

2. Luke and Lorelai argue within the first two minutes

Lorelai wants a cup of coffee; Luke thinks she's had too much of it already. This is the type of back and forth banter that takes place throughout the entire series.

3. The first mention of Lane's father

In the earlier seasons of the show, Lane often refers to her parents. However, Mr. Kim is never seen, and towards the later seasons, never mentioned again.

Yes, gasp, Rory was not always a private school girl. For the first 20 minutes of the series, she still attends Stars Hollow High.

5. Kim's Antiques was once called "The Glass Chimney"

In addition to the "Kim's Antiques" sign visible when Rory and Lane walk into Lane's house, there is also a sign that reads "The Glass Chimney: Kim's Art and Antiques."

6. When Rory gets into Chilton, she asks her mom if she ... with the principal

This was a must-have for the episode because what would Gilmore Girls be without some witty sexual innuendo?

"No, honey, that was a joke!," Lorelai responded to her daughter's inquiry.

7. The inside of Lorelai and Rory's house looks nothing like it does in future seasons

When Lorelai calls Chilton to discuss its hefty enrollment fees, she walks around the living room of a stranger's house. Yes, stranger, because this is definitely not the home that Rory and Lorelai later spend hours in, watching movies and eating junk food.

8. Lorelai hadn't seen her parents in a while

Lorelai's relationship with her parents is one of the more complicated in the entire series. This is seen from this very episode when Richard and Emily are shocked to see their daughter at their house. "Is it Easter already?" Emily asks. "What is it Christmas already?" Richard asks.

Before Dean decides to introduce himself to Rory, he watches her. And once they do actually meet, he admits, "I've been watching you," before noting he was attracted to her reading a book.

This is perhaps the most shocking part of the first episode. When Rory and Lorelai eat at Luke's for the second time in the pilot, they pick at salads. Even worse, Rory rinks orange juice. Seasons two through seven Rory and Lorelai would gawk at this.

11. Rory doesn't want to go to Chilton because of Dean

Similar to when she made the rash decision to drop out of Yale, in this episode, Rory tells her mother that she doesn't want to go to Chilton anymore. This scene is key because it makes both Gilmores realize how similar they are to one another, as both are easily persuaded by the men in their lives. "That should've been my first thought," Lorelai says to Rory when she finds out Dean is the reason she doesn't want to to go to Chilton. "After all, you're me."

12. Rory and Lorelai choose to listen to Macy Gray's "I Try" when they are upset

Though Rory and Loreali seem to be more into rock 'n' roll in the later episodes, in this one, both chose to listen to "I Try" by Macy Gray after they get into a fight with one another. This is similar to the salad incident.

13. Richard doesn't seem to have any interest in Rory

Richard and Rory have a strong and special bond throughout most of the series. But in the first few episodes of season one, he seems to care less about her. When he sees her for the first time in months, all he says is, "You're tall," before going back to his newspaper. He then falls asleep at the dinner table when the two are left alone for a few minutes.

A good portion of the Gilmore Girls series surrounds Luke and Lorelai's eventual romantic relationship with one another. And very early in the series, it is made known to viewers that Luke has feelings for Lorelai. So it's not surprising that there is some sort of flirting in the first episode, even if it just consists of, "Wow you look nice" and "you look nice, too."