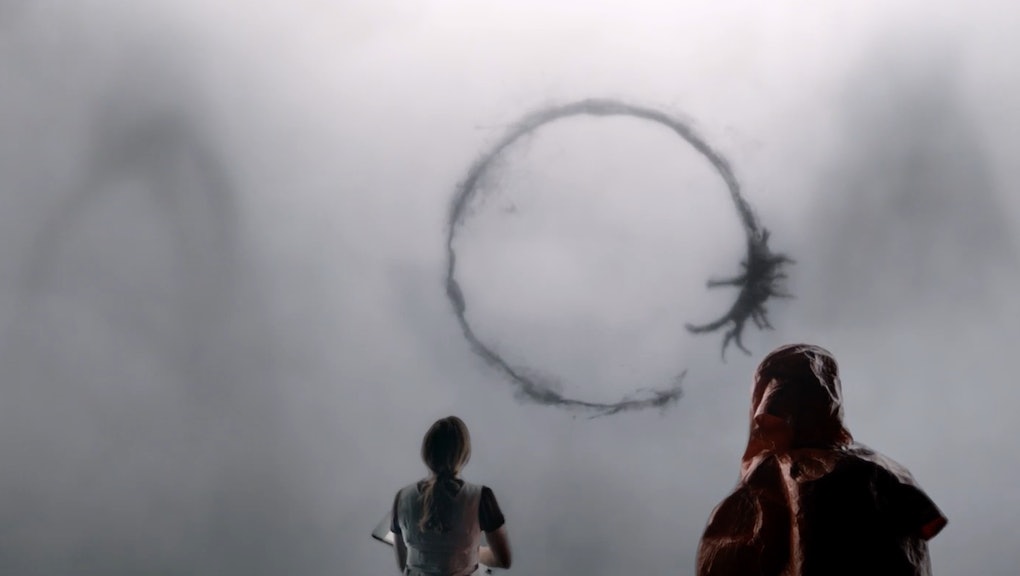 What if the one thing that stood between the world and all-out warfare was our ability to communicate? It's not that hard to imagine; misunderstandings and misconceptions have informed leaders' decisions to declare war for centuries.

(Editor's note: Spoilers ahead for Arrival, in theaters now.)

As a linguist with connections to previous governmental efforts (primarily translating difficult Farsi), Dr. Banks is first on the list when Col. Weber (Forest Whitaker) needs someone to communicate with the alien lifeforms. Though stunned and confused at first by the aliens, labeled "heptapods," and their strange form of language (ink that forms into circles), Dr. Banks is able to fairly quickly crack the code, becoming fluent before she even realizes it.

Then comes the twist of Arrival: The heptapods' language is a gift, a universal tongue that will unite humans against a coming threat. Other countries panic when they mistranslate the heptapods as saying they're offering a "weapon," not a tool, but Dr. Banks understands and becomes the first person fluent in the language. As a result, she gains the language's greatest benefit: the ability to see time in non-linear fashion. Put simply, she can see the future.

This seismic shift never feels like too much, because Villeneuve and screenwriter Eric Heisserer keep it so rooted in the film's humanity. The language's side effect isn't a theoretical power, it's something very real that we've been watching Dr. Banks experience throughout the film. Her revelation is our revelation.

She quickly puts it to work by flashing forward to a meeting with a Chinese general (Tzi Ma) after the war is halted. By listening to him in the future, she figures out how to stop Gen. Shang from dropping the world into chaos in the present. Her knowledge of a universal language literally saves humanity. It's a stunning idea, rendered beautifully on film.

Arrival believes in language as our great uniter, not because of what any character says, but because of Dr. Banks' ability to listen. If we could stop and truly hear each other, Villeneuve's film says, we could achieve peace. Though Arrival was shot long before Donald Trump's election, the message feels all the more resonant in a time marked by significant discord between Americans.

Few movies in 2016 feature finales like Arrival's. Set to Max Richter's devastating "On the Nature of Daylight," Dr. Banks considers powerful questions: Having seen the future and knowing what will happen to her future daughter and husband, will she press on anyway? Will she live for the precious moments before the devastating ending?

Arrival is one of the most powerful, overwhelming odes to communication we have. Language is Dr. Banks' greatest gift — not a weapon, but a tool — and armed with it, she does the impossible: She brings about peace. Our world has no such magic mental portal to the future, but Arrival's lesson remains potent: If we could listen and communicate with each other, Earth would be a very different place.