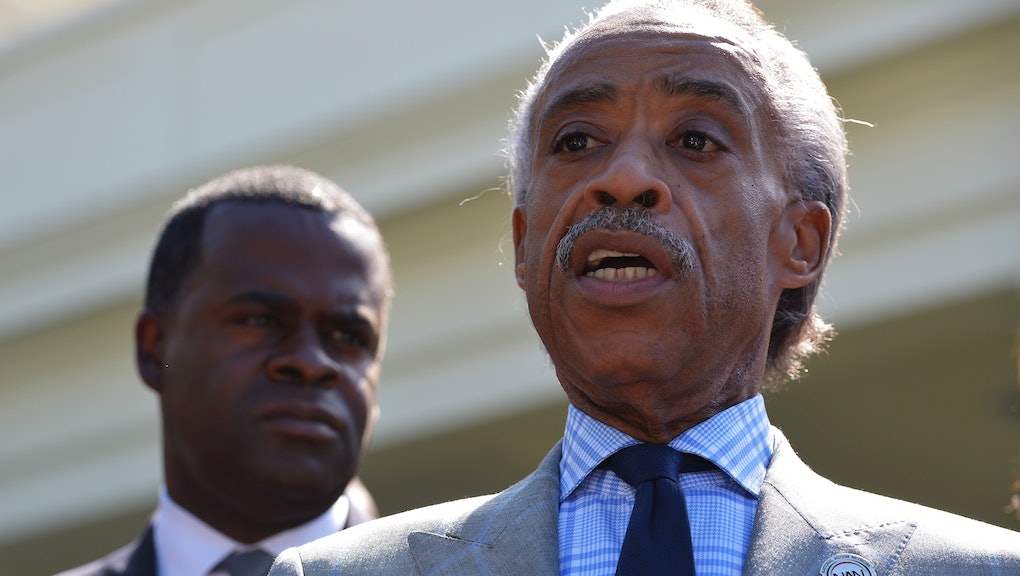 On Monday, leaders of the nation's top black civil rights organizations pledged to be ever-more vigilant over racial justice and voting rights issues in the wake of last week's unexpected election of Donald Trump to the White House.

The enforcement of existing civil rights laws, progress on criminal justice reform and maintenance of historic voter protections are all at stake after Trump's inauguration in January, the leaders said in a statement.

"We have a responsibility to vigorously oppose any policies or actions which are inconsistent with our agenda or would serve to turn back the clock on hard-fought gains," read the statement released jointly by seven organizations, including the NAACP, the National Urban League and the National Coalition on Black Civic Participation.

"America's advance toward diversity is not interrupted by the results of Tuesday's election," the statement read.

"We may have lost an election, but we have not lost our minds." — Rev. Al Sharpton

During a Monday morning teleconference, several leaders had sharp words for Trump's transition team, which announced on Sunday the appointment of former Breitbart chief executive Steve Bannon as top advisor to the president-elect. Bannon has been widely criticized for helping to normalize racist, anti-Semitic and homophobic rhetoric for the fringe contingent of the Republican party known as the alt-right via Breitbart's website.

"We may have lost an election, but we have not lost our minds," the Rev. Al Sharpton, founder of the National Action Network, said during the call. "The selection of Mr. Bannon sends some of the worst signals that we can imagine."

Sharpton, who has called for civil rights demonstrations leading up to the presidential inauguration on January 20, said Bannon's appointment and Trump's campaign rhetoric endanger the prospect of fairness in policing, at the ballot box and in economic opportunity. "We are not being alarmist, we are being realists about the record of the incoming president-elect and what he has said," Sharpton said.

Trump, a titan in the real estate industry, was once sued in federal court over allegedly denying housing to African-Americans. In debates, he called for the nationwide stop-and-frisk policing strategy that had already been ruled unconstitutional in New York City because of its racially disparate effect. At his campaign rallies, he encouraged supporters to visit voting precincts in minority neighborhoods and watch for voter fraud, which civil rights leaders said was akin to voter intimidation.

"All of this suggests to us that Donald Trump is not poised to continue the advance of civil rights in this country," Sherrilyn Ifill, president and director-counsel of the NAACP Legal Defense and Educational Fund, said during the conference call. "In fact, he's committed himself to returning us to days when African-Americans and others lived as second class citizens."

During his campaign, Trump pledged to enact policies which would improve socioeconomic outcomes for African-Americans. In late October, he unveiled his "New Deal For Black America — With A Plan For Urban Renewal." On Friday, Trump transition team surrogates reached out to the urban news website, Media Take Out, which published the plan in its entirety.

"Nobody needs to tell African-Americans in this country that the old new deal from the Democratic Party isn't working for them," read a statement included with Trump's deal. Calling safety a "civil right," Trump's plan includes "training and funding local and federal law enforcement operations to remove the gang members, drug dealers, and criminal cartels from [black] neighborhoods," according to the Media Take Out article.

In the plan, president-elect Trump has also committed to enacting immigration, trade and tax policies which would create working-class jobs for African-Americans. Civil rights leaders did not comment on Trump's deal Monday.

They were focused on the prospect that historic voting rights protections for minorities could be further imperiled by a Trump administration and Republican control of the House and Senate. Long before Trump called for voter fraud vigilance, the U.S. Supreme Court gutted a provision of the Voting Rights Act which required federal pre-clearance of changes to voting laws in states with a history of racially targeted disenfranchisement. Although courts have invalidated a slew of suppressive measures enacted since the 2013 decision in Shelby County v. Holder, the existence of those measures had an effect on the 2016 election.

Kristen Clarke, president of the Lawyers' Committee for Civil Rights Under Law, which ran a nationwide voter protection hotline on Election Day, said her organization received at least 37,000 calls from citizens who reported voter suppression tactics. Clark said an early analysis shows that voter suppression made it more difficult for blacks, Latinos, millennials and college students to vote in battleground states such as Wisconsin, Pennsylvania and North Carolina. She stopped short of blaming voter suppression for the defeat of Trump challenger Hillary Clinton.

"Addressing this threat to our most vulnerable citizens and our still young democracy will be a top priority for our organizations in the coming weeks and months," civil rights leaders said in the joint statement.

On the teleconference, Marc Morial, president and CEO of the National Urban League, said the civil rights community was "shocked and stunned" by the results of the election. But leaders are not deterred by them, he said.

"While we respect the results of the election, our responsibility, our duty, our obligation and our mission is bigger than any single election," Morial said. "It is a very important commitment that we have, and that our organizations represent, for the future of this nation."