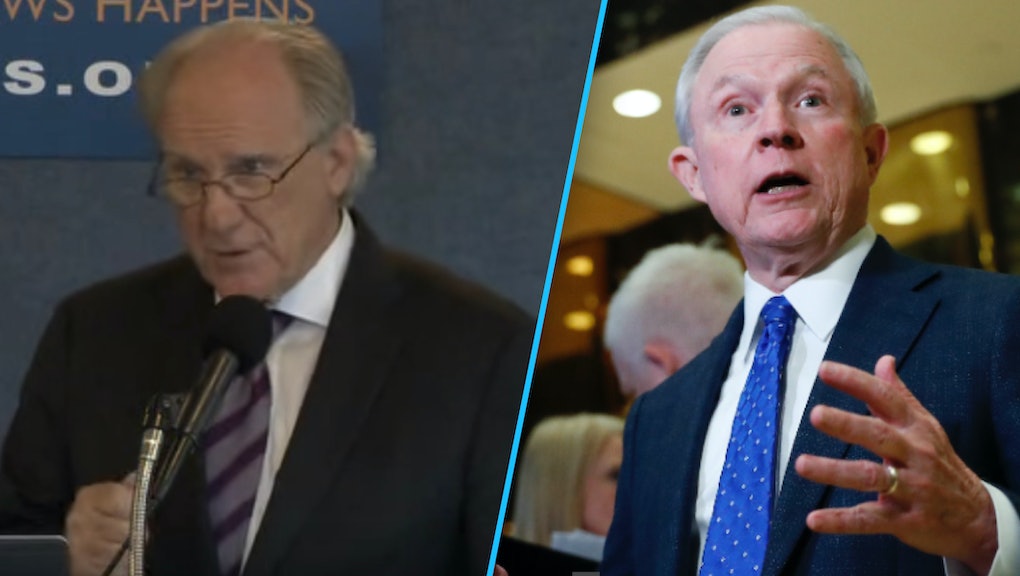 Does speaking out against racism work? Ask the man who took down Jeff Sessions.

Editor's note: As the Senate begins its confirmation hearings for Alabama Sen. Jeff Sessions on Tuesday, revisit Mic's interview with Gerry Hebert, who testified against then-federal judge nominee for his racist remarks in the 1980s.

Civil rights lawyer Gerry Hebert is a longtime advocate of voter protections in the United States. But 30 years ago, when Hebert served as an attorney in the U.S. Department of Justice's civil rights division, he was public enemy No. 1 for Republican Alabama Sen. Jeff Sessions.

In 1986, Hebert stood in opposition to Sessions, then a U.S. attorney in Mobile, Alabama, who had been nominated to a federal district court by President Ronald Reagan. That nomination was felled because Hebert, along with others, testified to racist remarks made by Sessions.

He'd been accused of agreeing with a federal judge who said a white civil rights lawyer was "a disgrace to his race," addressing a black prosecutor as "boy," joking about supporting the Ku Klux Klan until he learned some members used marijuana, and labeling civil rights advocacy groups such as the American Civil Liberties Union and the NAACP "un-American."

Now that Sessions has been tapped to serve as attorney general under the administration of President-elect Donald Trump, Hebert is experiencing a bit of deja vu at the prospect of his confirmation hearing.

"I think it's very alarming that [Sessions] would be offered the position — and it will be even more alarming if he's confirmed as attorney general," Hebert, director of Campaign Legal Center's voting rights and redistricting program, said Friday by phone.

"He has a long record of opposition to civil rights — not only the laws on the books, but also enforcement of those laws," Hebert said. Sessions' statements, including those that he has copped to or did not deny in testimony, show a "racial insensitivity" and a lacking grasp of institutional racism, Hebert said.

Trump's election has sparked conversations about whether whites are doing enough to challenge everyday displays of racism and intolerance, especially when those displays come from someone who wields political or institutional power. Mic spoke in-depth with Hebert about his experience and how, in his words, Sessions' appointment will be bad for civil rights in the United States. The interview has been edited for length.

Mic: What prompted you to speak out against Sessions in the 1980s?

Gerry Hebert: First of all, when I speak out on an issue, I don't speak out as a white individual. I speak out as an American. I felt that in the 1980s, when he was nominated for federal judgeship, his views on race became an issue. I had a responsibility to tell the U.S. Senate that was going to vote on that nomination what I knew. I never looked at it as anything more than doing my patriotic duty.

All these years later, do you look at that experience differently?

GH: I testified under oath to those things. I stand by everything I said. He largely didn't disagree with my memory of what he had said. If you look back on his testimony, he said he had a tendency to have a loose tongue... and he's never really apologized for that or come out and owned some of those racially insensitive remarks.

Could Sessions have changed since then? We know he endorsed Trump's campaign and has, as recently as last year, drawn criticism from his comments supportive of the Confederate flag.

GH: Over the course of the 30 years since that [1986 confirmation hearing], he hasn't really demonstrated a commitment to equal protection of the laws or equality and fairness for all Americans, especially those who have different skin colors, or speak a different language than us, or who are poor and downtrodden and oppressed. I think that you can always say, "I'm not a racist and I'm all about equality," but your actions speak so much louder than words.

Was testifying easy to do? It's not difficult to imagine that you would have experienced some type of backlash for calling a federal prosecutor out on his racism.

GH: I felt supported by my colleagues at the time, at the Justice Department. I never really gave much thought to what people's reactions would be. I just felt that you have to let the chips fall where they may. As long as you're telling the truth, and you have something to say that is relevant, you're always going to be protected.

So no one came forward to discourage you from testifying that a Justice Department colleague, nominated to the federal district court by a sitting president, was a racist?

GH: I did have my job threatened when I testified... by a U.S. senator from Alabama named Jeremiah Denton, as well as a chief of staff for Sen. Strom Thurmond of South Carolina, who at the time headed up the judiciary committee. [He said] I'd better get out there and straighten out the story, because it was painting Jeff Sessions in a very unfavorable light. I needed to do it, he said, or else I would find myself without a Justice Department job anymore.

How did you respond to them?

GH: I made it very clear to those people that they had no [authority] that could affect my job. I worked with the Department of Justice, in the executive branch, and independent from Congress, and I was there with the approval of my supervisors. I never really heard a peep from any of the people [who actually had the power to fire me]. But I was a young lawyer; I was 37. I had a big family — five children. You know, you worry about losing your job. But I still felt that I needed to do my duty.

If you were to testify again, or offer advice to someone who will testify at Sessions' attorney general confirmation hearings, what would you say?

GH: Be open and candid about what you know. One of the concerns I have about Sen. Sessions is that, over the years, his position on various laws and his opinion that he expresses is often not based on facts. It's kind of a seat-of-the-pants opinion and the facts actually demonstrate the opposite, in the area of voting rights, for example.

Do you expect that a Republican-controlled Senate is going to confirm him anyway?

GH: The Senate is often considered a club. It used to be considered a club of "good ol' boys." But, fortunately, our nation has elected a lot of women to the Senate. They have a tendency to support their own. I would urge people — and not just the senators — to keep an open mind and look at the facts about his record. Make a decision on whether you think that somebody with that track record deserves to be in charge of the civil rights division of the United States Department of Justice. In the era that we're in now, when there's front-page news almost daily about racial justice issues and law enforcement, do we really want someone with a track record that is anti-civil rights?