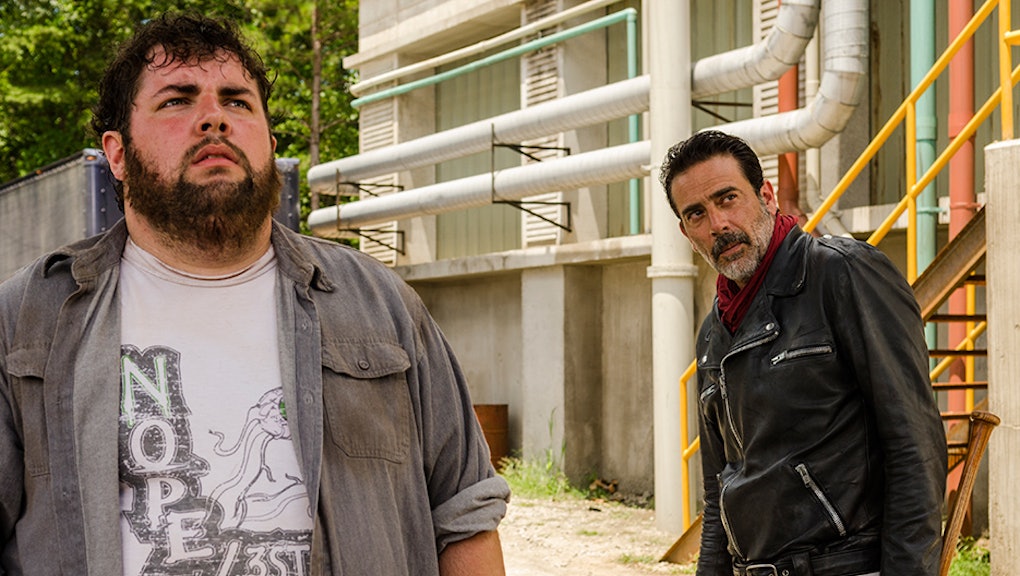 The Walking Dead returned to Negan's home base, the Sanctuary, in season seven's seventh episode, "Sing Me a Song." The new installment honed in on one of the comic book's most fascinating on-page relationships: Negan and Carl.

If one recalls from a couple episodes back — in fact, can we all forget about the 70-minute Tara episode from last week? — Carl and Jesus hitched a ride on one of the Saviors' trucks heading back to their community, and while Jesus' plan was to scope the place out, Carl had a bolder approach in mind. He was going to go in there and kill Negan, which, on a show full of characters making horrible decisions, certainly falls near the top of the list.

How did that go? Well, he was able to take out two Saviors before he was easily subdued. But Carl piqued Negan's interest by showing up in the first place. The end result is Negan taking Carl on a tour of the Sanctuary, though it feels like the show forgot that they've already introduced us to the community through Daryl's awful, but admittedly catchy "Easy Street" episode.

There's a rehashing of the Negan themes we've been familiar with since the beginning (did you know he really likes rules and his baseball bat?), while the show introduced the character's many wives. The Walking Dead is often an unsubtle show, so approaching Negan's twisted relationship with women, and specifically his inapt understanding of rape, required a deft touch. The main focus was one of his wives "cheating" on him with her apparent love interest, a Savior named Mark, and the punishment Negan doles out for him is brutal. Just like Dwight's punishment at Negan's hands for escaping the Sanctuary — before ultimately returning with Sherry, now another one of Negan's wives — he burns the side of Mark's face with an iron.

Negan uses this moment to explain to Carl the importance of rules (ugh) and his perspective of retributive justice, before citing that Carl needs a proper "punishment" for killing two of his men. What he wants in return, just as he asks Carl in the comics, is to see Carl's missing eye. Like the comics, it makes Carl cry. Then, per the episode title, he asks that Carl sing him a song — any song — while he swings his bat Lucille about like a lunatic. So yes, in a word, their mentor-mentee relationship is strange.

Carl, ever the "future serial killer" as Negan has described him on a couple of occasions, reminds Negan that he is going to kill him. This only makes Negan like Carl more, and the two eventually drive together to Alexandria, where Negan is going to likely snag more supplies from Rick and the group. However, Rick and Aaron are off on a supply run, so Negan takes this time to lounge around Alexandria while he waits for them.

The episode's B plot focuses on Rick and Aaron's scavenging trip, while Rosita has Eugene begin creating bullets for her trip outside of Alexandria. Meanwhile, Spencer and Father Gabriel set out on their own supply run in a car, which Spencer uses as a makeshift confessional to express his doubts about Rick's leadership and the group's decision to attack one of Negan's compounds in season six and murder Saviors in their sleep.

Does Spencer have a point?

While The Walking Dead makes it easy for the audience to dislike Spencer — and Father Gabriel delivers the ultimate burn to him, "Saying doesn't make you a sinner, but it does make you a tremendous shit" — the show has a morality issue that shouldn't be shrugged off just because it's been pointed out by one of its most disliked characters. Was Rick and the group justified in their attack on the Saviors, or is it morally indefensible?

Jeffrey Dean Morgan, who plays Negan, made a compelling case when he intimated that Negan would be the protagonist of The Walking Dead if the series focused on him from the get-go. While his methods — most notably beating people over the head with a barbed wire-covered baseball bat — are extreme and gory, he was ultimately responding to a heinous attack from another group that left many of his people dead.

Spencer isn't the only character who has brought it up: Heath mentioned this to Tara in the previous episode, but it fell on deaf ears with the vague assurance from Tara that the compound attack had to be done.

It's frustrating that this moral dilemma is being brought up by a minor character (Heath) and another we're meant to dislike (Spencer). However, Rick and the group can spin it whichever way they want. It's becoming more difficult to comprehend why many Alexandrians still vouch for Rick's leadership so passionately.

As we head into the midseason finale, it's clear what the endgame for season seven is: The other safe havens (Alexandria, Hilltop Colony and the Kingdom) under Negan's rule will challenge him and the Saviors, echoing the comic book's "All Out War" storyline. Something still needs to push Rick over the edge to come to terms with fighting Negan — if you're familiar with the comics, the midseason finale could get bloody for one character in particular — but hopefully that's not his only revelation.

If Rick, and the group by extension, can accept that his initial actions against the Saviors were wrong, the show can justifiably paint him as a flawed protagonist. If they can achieve this, it could be the first of many steps for The Walking Dead to get back on track after an underwhelming seventh season.