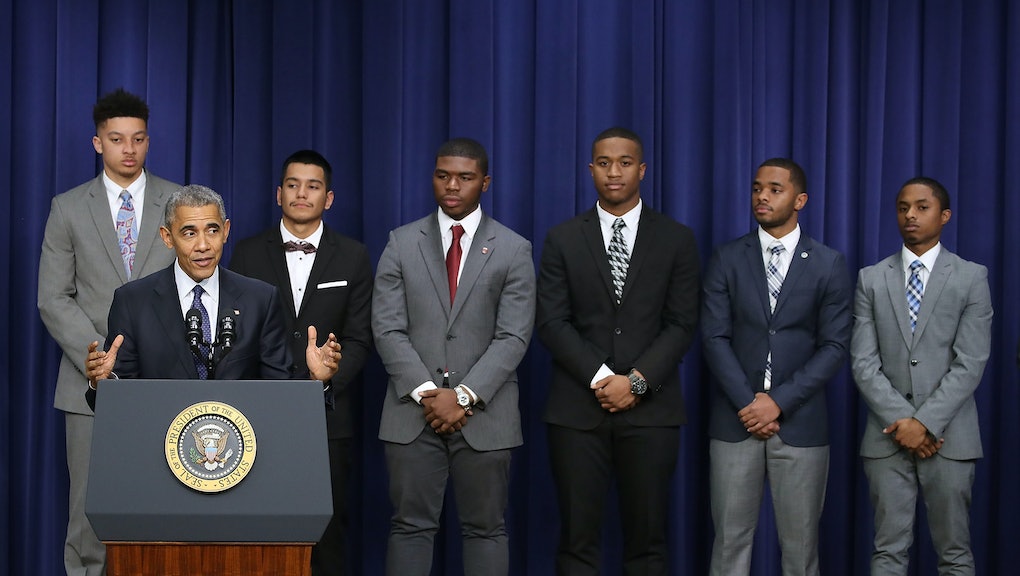 WASHINGTON, D.C. — Before an audience of mostly black and Latino men and boys, and with little more than a month left in his presidency, President Barack Obama committed to defending one of the crowning racial justice initiatives of his historic administration.

My Brother's Keeper, launched in 2013, is a $350 million private-public partnership that leverages the resources of philanthropic groups, businesses and the federal government to provide mentorship and jobs to black and Latino young men, who for generations have been denied the institutional support.

"Ensuring that our young people can go as far as their dreams and hard work will take them is the single most important task that we have as a nation," Obama said. "This is something that I will be invested in for the rest of my life."

Obama made his comments Wednesday at the White House during what will likely be the last gathering of program participants and leaders while he is in office. The daylong summit was one of a handful that's been held in cities across the nation since the program's launch.

"We are just scratching the surface. For every one of these young men," Obama said, pointing to a group of the program's participants standing behind him, "there are tens of thousands, hundreds of thousands who are not currently being reached."

My Brother's Keeper marks a crowning achievement of the Obama administration — and also a shift. It is one of the only initiatives launched by the country's first black president that is focused on racial justice. Other programs like the Affordable Care Act have significantly reduced racial disparities in health care access in several states, Obama has not cited racial equality as its motivation. As Kai Wright wrote in the Nation, within a year of the Affordable Care Act's implementation, it had erased the disparity in health coverage between black and white children.

During his time in office, Obama has walked a thin line on race. The Atlantic's Ta-Nehisi Coates detailed that conundrum this month in the Atlantic. "In those rare moments when Obama made any sort of comment attacking racism, firestorms threatened to consume his governing agenda," Coates wrote, describing an instance in which Obama criticized police as "acting stupidly" for arresting Harvard University professor Henry Louis Gates Jr. for trying to get into his own home. Those comments led to a two-thirds of whites reporting that they viewed Obama less favorably.

But from the start, My Brother's Keeper was different. It acknowledged that racism in America was real, had a discernable impact and needed measurable intervention. Referencing a litany of statistics about the harsh realities facing black men and boys — higher suspension rates from school, more interaction with the criminal justice system, lower life expectancy — Obama said something needed to change.

"We just assume this is an inevitable part of American life, instead of the outrage that it is," he said in 2014. "It's like a cultural backdrop for us in movies, in television. We just assume, of course it's going to be like that."

My Brother's Keeper was committed to changing that reality. More than 250 communities in all 50 states have taken on Obama's challenge. And, according to the White House, philanthropic groups, businesses and others have invested more than $1 billion into the program.

The program has its critics. Social justice advocates, led by legal scholar Kimberlé Crenshaw, have noted the absence of similar resources for black and Latina girls and women who faces similarly bleak — and, at times, worse — prospects for employment and stability than their male counterparts. "What needs to be fixed are not boys per se, but the conditions in which marginalized communities of color must live," Crenshaw wrote in a 2014 op-ed for the New York Times. A coalition of 200 black men also raised concerns about the exclusion of girls and women from the program. That pressure worked: In November 2015, the White House announced a $118 million initiative to support women and girls of color.

The work of supporting young people of color, Obama acknowledged Wednesday, is far from finished.

"This is going to be a big project," Obama said. "As a consequence of neglect over generations, we shouldn't expect that we're going to solve these problems overnight."