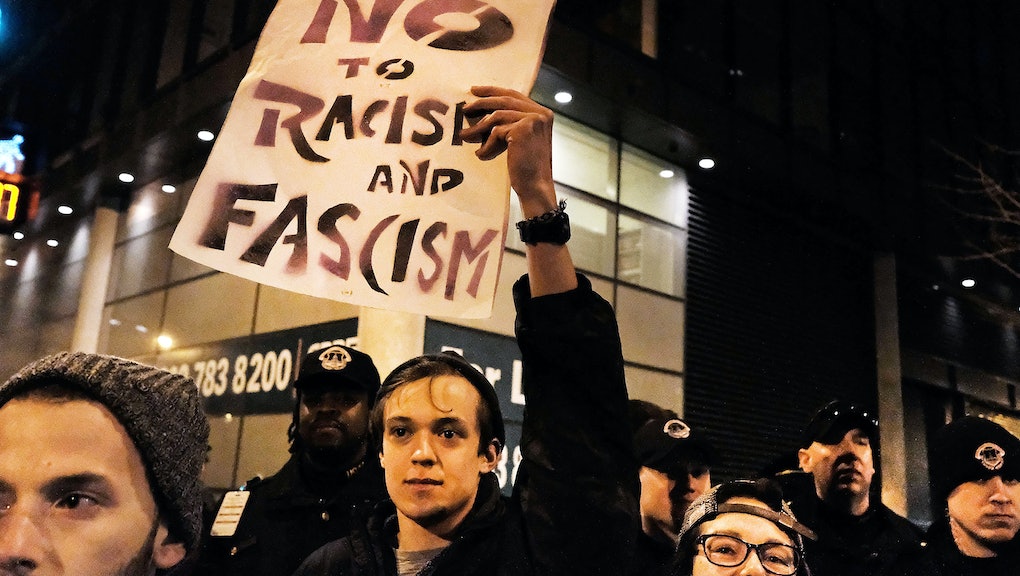 WASHINGTON — As planned, close to 50 black and brown activists marched from the Metropolitan Police Department station near Judiciary Square to an inaugural security check point — just as inauguration attendees began to arrive Friday for the swearing-in ceremony of President-elect Donald Trump.

Forming a line in front of a tent of magnetometers at one of 12 inaugural security screening locations, activists from the Black Lives Matter network and other groups chained themselves to each other and to metal barricades. A handful of inauguration attendees who tried to forcibly break through the human chain were pushed back by activists protecting the human — and literal — chain.

Once the gate was effectively shut down, activists celebrated by dancing, letting up chants of "Black Live Matter" and "I believe that we will win." Soon thereafter, the protesters' numbers began to swell. Just after 9:30 a.m, more than 500 people had joined up, forming a human wall around the chained black activists.

As the Obama administration prepared to hand over power to Trump, this disruption represented a move by black activists to inaugurate a four-year resistance to the new president's regime. They were spurred to action by alarm over his incoming cabinet's seeming disregard for criminal justice and policing reforms, the rights of transgender individuals, economic inequality and other issues disproportionately affecting black lives.

These activists said they will carry the momentum built during protests in places like Ferguson, Missouri, Baltimore and Charlotte, North Carolina — despite a political climate requiring a greater amount of personal sacrifice.

"Since the election, every day is a recommitment to making sure that [the momentum is] not lost," April Goggans, core organizer of Black Lives Matter D.C., said in an interview.

"Here we dig our feet into the ground, again, but in a way that [shows] we know that resistance is now a way of life," said Goggans, who helped organize BLM's inaugural demonstrations.

The Movement for Black Lives, a collective of over 50 black activists groups, has planned Trump resistance inside and outside of the framework of DisruptJ20, the protest coalition that encouraged an Inauguration Day convergence of prominent activist groups. Because some activists groups cannot agree on a unifying message for the resistance, many protesters are rallying in the names of their own causes at their designated inaugural security check gates.

"The message that people are going to take away is very clear," said Janaya Khan, core organizer of Black Lives Matter Toronto, who joined protesters in solidarity with the BLM network. "This is a fight for everyone. Donald Trump is a threat to everyone. This shows you the possibilities of resistance. That's what this represents."

Since Monday, Martin Luther King Jr. Day, movement groups have participated in a nationwide campaign known as #ReclaimMLK. Each day of the week was themed to focused on the lives most marginalized by Trump's proposed policies. The effort is, in part, inspired by King's Poor People's Campaign, which the civil rights icon launched to highlight economic justice as a means for curing racial inequality.

Black Youth Project 100, Dream Defenders and BLM are among activist groups participating in the campaign. In a statement released on Thursday, the Movement for Black Lives said, "On the eve of Inauguration Day, we're facing an administration that has vehemently attacked reproductive rights and income equality, an intersection of issues that directly and disproportionately impact black women, femmes and girls."

That effort doesn't come together without the work of organizers like Goggans. As a working, single mother of a college-aged daughter, Goggans said the thought of a better future for black women and girls is what motivates her.

"For me, it's the feeling of not having to live in fear — that I don't have to be paralyzed by fear," she said.

On Thursday, Goggans and BLM D.C. organizer Trayce Redd labeled sleeping bags and ran logistics for movement activists who were arriving from out of town. Some were staying at Goggans' Southeast Washington home.

That's where some of the sacrifice comes in, she said: "You give a lot of yourself. You give some of your peace away."

But activists knew this going into Election Day in 2016. In Washington, BLM hosted an election returns watch party and the results left many activists awestruck, Goggans said.

"But then [we're] turning to each other and saying, 'So now what?'" she said. "And being organizers, the answer wasn't going to be, 'Nothing.'"

Planning for Inauguration Day protests started to coalesce in the last two weeks. However their resistance appeared to outsiders, they wanted black people who couldn't make it to Washington on Friday to see themselves in those who did protest.

"Black folks will begin to live and understand their world in terms of resisting anything that's trying to attack us on any front," she said.