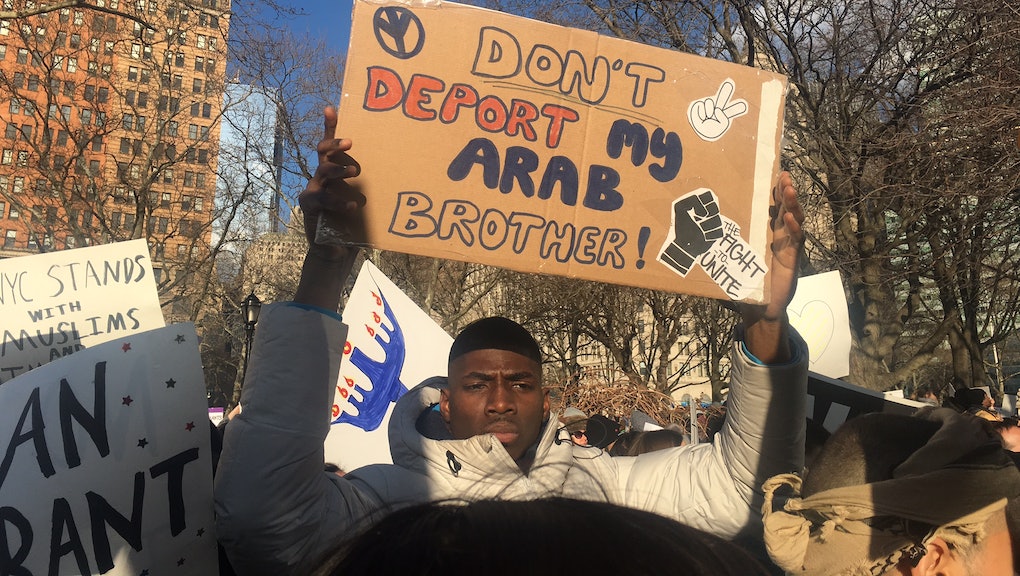 Gibbs, 25, is a Christian of African-American descent, who is concerned about excessive uses of force by police. Dakhlaour, 24, is a Muslim of Tunisian descent, who is worried about an uptick in religious bigotry in the U.S.

"For the last couple of years, we've been fighting injustice in this country," Gibbs, a supporter of the Black Lives Matter movement, said Sunday at a Manhattan protest of President Donald Trump's immigration ban for travelers and refugees from Muslim- and black-majority nations.

"I'm tired of all the shootings and I'm tired of the Islamophobia," Dakhlaour, who attended the protest in Battery Park with Gibbs, said.

That display of unity between two friends is what black activists hoped to amplify going forward, amid the confusion that surrounds the new restrictions. For a handful of black advocacy organizations, whose members joined protests at airports and on the streets of major cities across the nation, the motivation was clear: if all black lives matter, then Trump's controversial ban can not stand, they said. Some groups are scrambling to devote more resources to aiding those affected, in recognition that the executive order is bringing harm to tens of thousands of Arab and black people alike.

"I think the most difficult thing for us to get people to understand is that this ban transcends religion — it goes to race," Carl Lipscombe, programs manager for the Black Alliance for Justice Immigration, said in a phone interview Monday.

Lipscombe said several of the organization's staff members were out protesting at airports in Queens, New York; Oakland, California; and Los Angeles, where protesters briefly shut down it. Activists were also supporting families affected by Trump's immigration restriction, although Lipscombe could not say how many of them his group had helped.

"This is an administration that seems bent on perpetuating racism and xenophobia. But we're going to be there for our communities," Lipscombe said of BAJI, a grassroots immigrant rights advocacy group with more than 4,000 members nationwide. "We're preparing for the worst, and preparing to defend individuals from deportation."

Over the weekend, protesters crowded international arrival gates at more than a dozen airports, amid reports that Trump's executive order, signed Friday, had stranded visa- and green card-holders and refugees at Customs and Border Protection counters. More than a hundred travelers from Muslim-majority countries — Iran, Iraq, Libya, Somalia, Sudan and Yemen — were reportedly detained at airports, suggesting that the president's order was, as he promised during his campaign, a Muslim travel ban.

The executive order suspends entry to the U.S. for migrants from the affected countries for a minimum 90 days, and halts indefinitely the nation's resettlement program for Syrian refugees. "To be clear, this is not a Muslim ban, as the media is falsely reporting," Trump said in a statement released by the White House on Sunday. "This is not about religion — this is about terror and keeping our country safe."

But that statement did little to assuage global concerns about the move. The African Union, a 54-member nation organizing group that spans the continent, blasted Trump's order in the strongest terms, given that three of its members — Libya, Somalia and Sudan — are subject to it.

"The very country to which many of our people were taken as slaves during the transatlantic slave trade has now decided to ban refugees from some of our countries," AU head Nkosazana Dlamini-Zuma said at the union's summit in Addis Ababa, Ethiopia, on Monday.

"What do we do about this?" Dlamini-Zuma wondered. "Indeed, this is one of the greatest challenges to our unity and solidarity."

The Movement for Black Lives, a coalition of over 50 activists groups known more broadly as the anti-police brutality Black Lives Matter movement, enlarged its scope in a sweeping policy platform released last August. The coalition called for "an end to the war on black immigrants," and decried deportations, federal immigration raids and the lack of legal representation for those facing deportation proceedings.

"Amongst all immigrants, black immigrants are nearly three times more likely to be detained and deported, as a result of an alleged criminal offense," the policy platform states.

The Black Lives Matter Global Network released a statement on Tuesday explaining why the network is throwing its weight behind stopping the immigrant ban.

"Local Black Lives Matter chapters have been in the fight; we know that an attack on any of us is an attack on all of us," the group said in the release. "Many of us have made the decision not to stand idly by, but rather to show up for the lives of people who are being profiled and pushed out."

Of the more than 22.2 million foreign-born U.S. residents who are not citizens, an estimated 943,973 were African-born, according to 2015 U.S. Census Bureau data. Somalis, those who have non-citizen resident status and those who are citizens, numbered 89,153 in 2015. There were 46,037 such people from Sudan and 42,269 people from other northern African nations.

"I'm here because I'm a green card holder, I'm a Muslim and I'm an American," Howa Hassan, a Somali who has been a permanent resident of the U.S. for 24 years, said during Sunday's march through lower Manhattan that drew thousands of protesters. "This is not only an assault on my rights, but all rights of humanity and the people of America."

Hassan was joined a by black immigrant friends from Kenya and South Sudan, one of them a political refugee. She said her immigration lawyer told her not to leave the U.S. for more than 120 days — when Trump's travel ban is said to expire — just to be safe. For Hassan, the order itself smacks of both religious and racial discrimination, she said angrily.