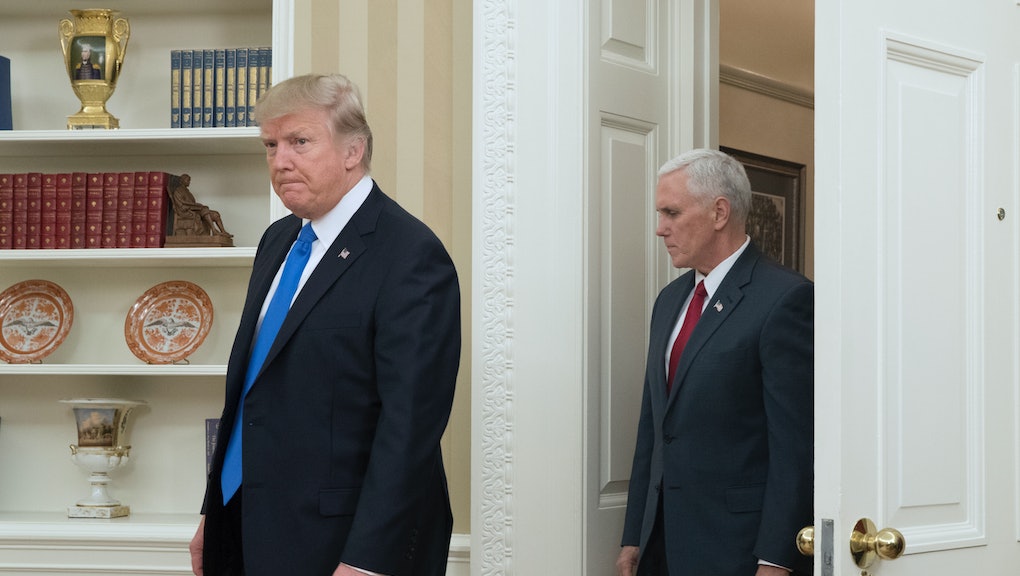 First they came for Muslims, now the Trump administration might be coming for everyone.

At least that's been the reaction so far to a leaked draft of a Trump administration religious freedom order that could legalize discrimination by offering exemptions to businesses and organizations that refuse service to people because they object to same-sex marriage, pre-marital sex, abortion, and a person's gender identity not aligned with their assigned gender. The draft was first obtained by Sarah Posner of the Investigative Fund and the Nation.

As such, the four-page draft outlines that businesses and organizations should be legally exempt from providing services if any employee "believes, speaks, or acts (or declines to act) in accordance with the belief that marriage is or should be recognized as the union of one man and one woman, sexual relations are properly reserved for such a marriage, male and female and their equivalents refer to an individual’s immutable biological sex as objectively determined by anatomy, physiology or genetics at or before birth and that human life begins at conception and merits protection at all stages of life."

The leaked draft also makes it clear that the Trump administration is trying to curtail the reach of the federal government.

"Americans and their religious organizations will not be coerced by the federal government into participating in activities that violate their conscience," the document reads.

In addition to providing religious exemptions to people who object to same-sex marriage and transgender identity, the leaked draft would also aim to make it harder for women to access contraception and abortions through the Affordable Care Act.

White House spokesman Sean Spicer was asked directly on Monday if such an order was in the works.

"I’m not getting ahead of the executive orders that we may or may not issue," he said. "There is a lot of executive orders, a lot of things that the president has talked about and will continue to fulfill, but we have nothing on that front now."

Pence backtracked on some of the law's harsher stances and "clarified" its intent, saying that the "law does not give business a right to deny services to anyone," but it's still very much on the books in the Hoosier State.

You can view the full leaked draft of the religious freedom executive order at the Nation.