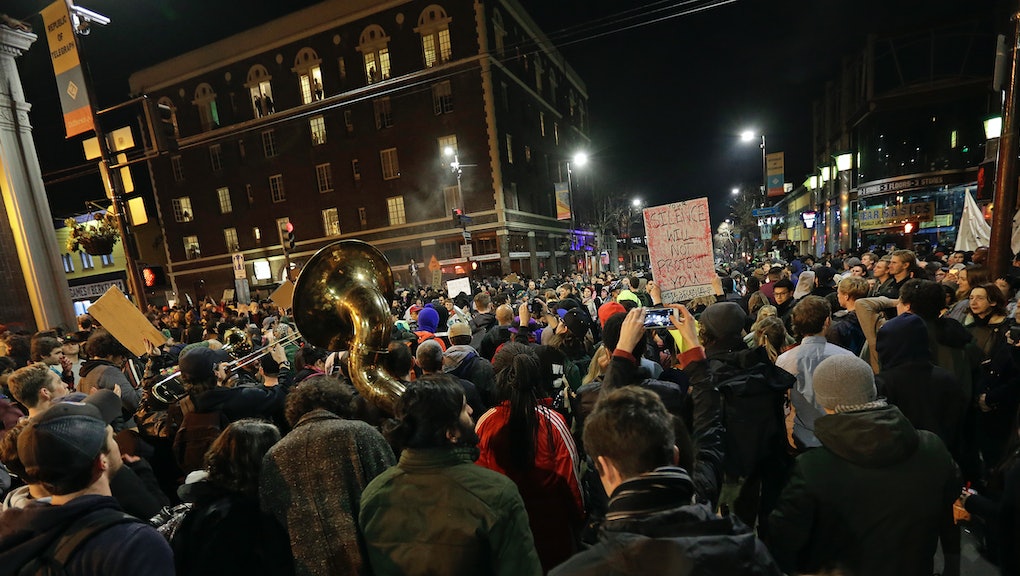 On Thursday, President Donald Trump tweeted a lie about the protests at University of California, Berkeley against far-right provocateur and Breitbart editor Milo Yiannopoulos — but that may not be the most unsettling thing about the president's early morning message.

The protests erupted Wednesday night ahead of a speech Yiannopoulos was scheduled to make on campus. The Berkeley College Republicans reportedly invited Yiannopoulos' "Dangerous Faggot" speaking tour to campus, which had been scheduled to take place in the Martin Luther King Jr. Student Union.

The alt-right pundit has used his openly gay identity to discredit issues of homophobia in conservative politics. Yiannopolous has also spoken out against the Black Lives Matter movement and feminism, calling them "cancerous and toxic to free expression."

The protests were nonviolent, initially. The arrival of around 150 masked anti-fascist black bloc protesters changed the atmosphere, students said. They shot fireworks at university police officers and pulled down metal barricades surrounding the student union, the San Francisco Chronicle reported. A fire was started outside of the building and police evacuated Yiannopoulos, before the event was called off altogether.

In his tweet, Trump falsely alleged that UC Berkeley infringed on the free speech of Yiannopoulos by canceling his event when violence broke out among some protesters. Trump also suggested that the university allowed Yiannopoulos' supporters to be attacked by his opponents — a claim that several students say isn't true, given that law enforcement used tear gas and rubber bullets to quell the violence.

Trump followed his unfounded allegations against the university with a threat to strip the university of its federal aide — a message that alarmed students already bristling from increased fees and tuition.

Even if he doesn't make good on the threat, some students say they don't like the idea that the president of the United States would tax them for exercising their constitutional right to express dissent.

Trump's threat to stripping the university's federal funding is a threat to the affordability of public higher learning, several students said. A university spokesperson did not immediately respond to a request for comment.

UC Berkeley is charging $28,502 in tuition, fees and housing for the 2016-2017 academic year. For the next academic year, tuition and fees will increase by 2.5%, or $282. UC Board of Regents approved the tuition hike on Jan. 26, after having avoided doing so for six years.

Iman Sylvain, a 28-year-old PhD candidate in the school of biology, said her advanced studies have been largely supported by federal and state grants.

"For me, there's a very real educational equity question here," Sylvain said. "But what else would you expect from [the president.] UC Berkeley is like the enemy of Donald Trump. It would send a message, if he was allowed to defund our schools."

Marcelo Garzo, a 33-year-old PhD candidate in the Department of Ethnic Studies, wondered if a cut in federal funding would cause the university to temporarily shut down.

"That would be devastating," Garzo said. "But from my perspective, it would open up a really important dialogue on campus about how we would respond to that."

Many students are only able to attend UC Berkeley, which had been consistently ranked as a top public college, because of federal Pell grants, Cook said. "If you cut that Pell grant, you just make student take out more loans," Cook said. "Students are on the brink, especially millennials. We can't get 21st century jobs without further training. An extra $200 a semester — that's the difference between being in school and not being in school."

Cook concluded: "That's why [Trump's tweet] is a dangerous sentiment."