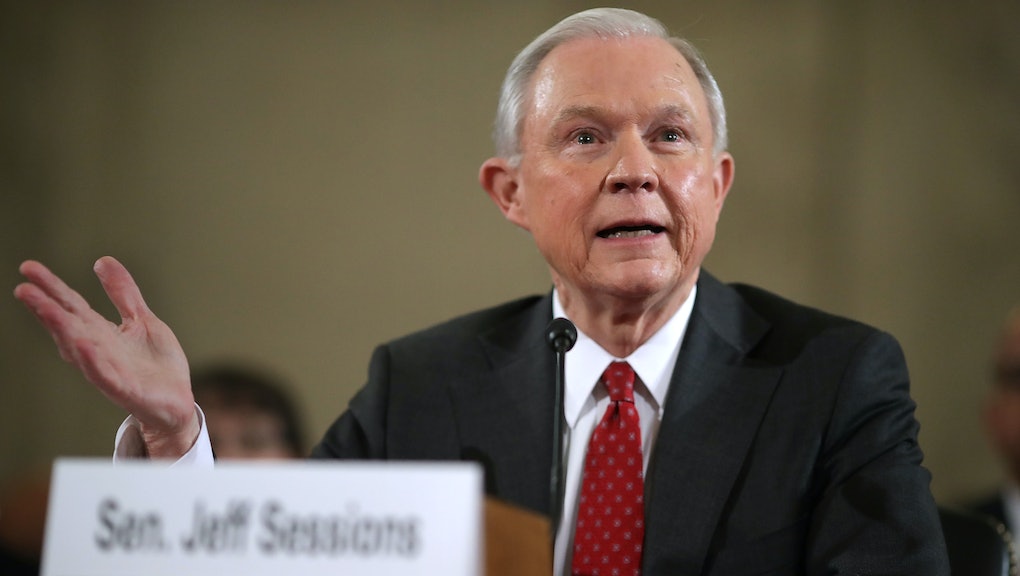 Democrats and interest groups on the left won’t be able stop Alabama Sen. Jeff Sessions, President Donald Trump’s pick to head the Department of Justice, from becoming the next attorney general. Sessions is all but certain to be confirmed as the United States' chief law enforcement official by the Republican-controlled Senate.

That doesn’t mean they won’t give him hell during his tenure.

"Sen. Session is not a friend of Lady Justice and he is not a friend of communities of color," Rep. Cedric Richmond (D-La.) chairman of the Congressional Black Caucus, said during a press conference Tuesday, ahead of Wednesday's final Senate vote to confirm Sessions. "No matter how much time has passed, history has not changed and his actions have not changed."

"The Department of Justice's whole job is to make sure justice is blind, [and] to make sure that we do not allow discrimination," Rep. Michelle Lujan Grisham (D-N.M.), chairwoman of the Congressional Hispanic Caucus, said during the press conference.

"Sessions has been notoriously bad on immigration issues," she added. "He wants a ban. He’s not clear about protecting refugees."

So lawmakers and civil rights groups plan on scrutinizing him through Justice Department budget appropriations and through other means of public pressure, they said on Tuesday.

"We will go to Congress and call on our elected members — including Charles Schumer, Dianne Feinstein and other senators who have condemned Sessions — to refuse to surrender funding for the DOJ’s Civil Rights Division," Rashad Robinson, the head of the racial justice group, Color of Change, said in a statement.

A broad coalition opposed Sessions’ nomination to be attorney general nomination since it was announced in November. Congressional caucuses representing black, Latino and Asian-American communities have spoken out with alarm. So have legacy civil rights organizations such as the NAACP and the American Civil Liberties Union.

During his confirmation hearings, the Alabama senator pushed back against charges that he was racist or supported racist groups like the Ku Klux Klan — allegations of racism sank Sessions’ nomination for a federal judgeship in 1986.

It's unclear whether the defense has paid off.

"We know it's more important than ever to come together to protect diverse populations,” Rep. Judy Chu (D-Calif.) chairwoman of the Congressional Asian Pacific American Caucus, said during the press conference. "We will not allow history to repeat itself."

The Congressional Black Caucus led the charge against Sessions’ nomination. Sen. Cory Booker (D-N.J.) and civil rights icon Rep. John Lewis (D-Ga.) were among those to testify at Sessions’ confirmation hearings in January.

On Tuesday night, Democratic members held the Senate floor as a last stand against Sessions' nomination. The talk-a-thon was a little-noted symbolic protest until Republican senators moved to silence Sen. Elizabeth Warren (D-Mass.) from reading a letter penned by Coretta Scott King, activist and wife of Rev. Dr. Martin Luther King Jr., during the fight over Sessions in the 1980s. Outrage quickly overtook social media.

Activists have been hard at work, too. Cornell Williams Brooks, the president and CEO of the NAACP has twice been arrested with others for staging sit-ins at Sessions’ district office in Mobile, Alabama.

On Tuesday afternoon, the Leadership Conference on Civil and Human Rights, a national social justice collective, said it would deliver a million petition signatures calling on the Senate vote against Sessions’ confirmation. The petitions were delivered to the office of Sen. Richard Blumenthal (D-Conn.), a member of the Senate Judiciary Committee, which advanced the Sessions nomination on to the full upper chamber.

In addition to the petitions, the Leadership Conference ran a PSA highlighting Sessions’ poor record on voting rights on Jan. 31.

These efforts may not win the day, but they are not in vain, Scott Simpson, spokesman for the Leadership Conference, said Monday.

"This is poised to be one of the closest votes for attorney general in a while," Simpson said. "The message has been clear: If you don’t want to be seen as a lapdog for the president, you have to oppose this nomination."

Trump’s executive order banning travelers from seven majority-Muslim countries and all refugees helped clarify for activists the dangers posed by Sessions. The ACLU called on the Senate Judiciary to hold new hearings for Sessions' nomination because of reports that he had a hand in helping the Trump administration craft the legalese needed in the order.

"Folks do get that Sessions is attached to all the craziness that we’re seeing now," Simpson, of the Leadership Conference said.

The progressive politicians and rights groups have good reasons to worry. Trump's Justice Department has sought to delay implementation of the court-enforceable consent decree that seeks reform in the Baltimore Police Department. A federal judge granted the Tump administration's motion on Inauguration Day. Elsewhere, a U.S. district court granted the Trump administration's motion for a 30-day extension on a hearing over Texas' allegedly racially discriminatory photo voter ID law that had been halted ahead of the election.

Sessions himself isn’t the only cause for concern at Trump's Justice Department among civil rights leaders. John Gore, the designee chosen to run the Justice Department's civil rights division under Sessions, previously defended the University of North Carolina in a civil rights lawsuit against the state law restricting the right of transgender people to use the bathroom of their preference.

"Throughout the most recent years, Gore has stood opposed to decisions that the public would expect the DOJ to take in a number of matters," Kristen Clarke, executive director of the Lawyers Committee for Civil Rights Under Law, said recently during a conference call with reporters.

“There is no agency that bears more responsibility,” Clarke added. “We fully intend to hold this Justice Department responsible for dealing with discrimination across our country.”

The Movement for Black Lives, a collective of more than 50 black activists groups known broadly for their anti-police brutality protests, has also taken part in efforts to oppose Sessions. Robinson, the head of Color of Change, is among those leading the charge.

"If the Senate confirms Jeff Sessions, it will put a rubber stamp on Donald Trump’s racist, right-wing agenda to steal our rights, our freedoms and our country," Robinson said in the statement. “We will call on all people of conscience to defend our freedom, as Americans, to vote. We will tell Attorney General Sessions this: 'When it comes to our fundamental rights, there are no hostage negotiations.'"