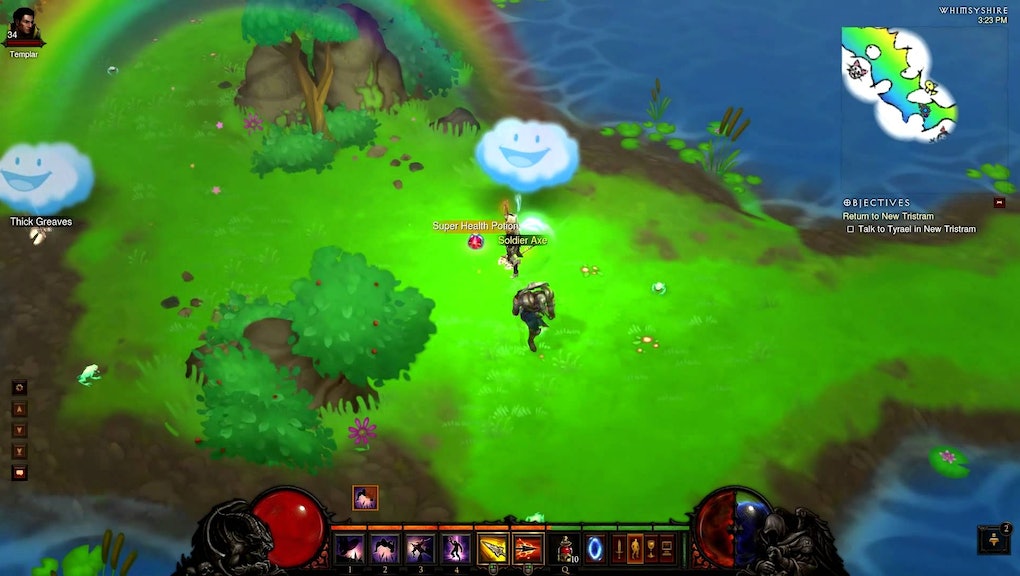 Diablo 3 is still going strong. With its upcoming Necromancer release, players are still flocking to the game left and right in anticipation. If you're looking for ways to experiment in Diablo 3 beyond finishing the story mode and checking out Adventure mode, there's a bushel of cheats and unlockables you can play with to keep things fresh, including a whole new unlockable area.

Here are some of our favorite cheats and unlockables for Diablo 3 on PC you can try before the new Necromancer character releases.

If you need some extra experience or money here and there, don't fret — there's a much easier way to get it. For additional XP, gold and items, you can start by playing the "Legacy of Cain: Explore Cellar" quest in Act I, then head to the Old Ruins and go northeast from there. You'll find a mob one cellar down, where you'll have to kill off Captain Daltyn and a score of minions, according to CheatCC.

Once you've taken out Captain Daltyn, you'll get at least one magic item and some coins; there's also a health potion hiding in a cauldron nearby. Sometimes a loot chest will appear, too. You can repeat this by exiting and re-entering as many times as you like. Captain Daltyn will keep appearing and you can keep slaying him for the rewards.

Diablo 3 PC Cheats and Unlockables: Get more potions and items

If you go to an area that offers life potions or chests, take them and then immediately save and quit Diablo 3. By returning to your saved game, you'll likely find that the area where you previously picked up said potion or opened said chest will give you another item or potion. Sometimes the chest won't spawn again, but if you don't see one, just quit and reload your save. You'll get items, gold, potions and more, according to Cheatbook.de.

Diablo 3 PC Cheats and Unlockables: How to unlock Whimsyshire

There's a secret level of Diablo 3 called Whimsyshire that's tucked away behind a wall of special ingredients you need to collect. It's a pastel world with cupcakes, adorable monsters and other cute additions that'll make you question if you've suddenly left Diablo 3 for another game. It's pretty simple to get to, but you've got to be persistent. Here's how you can reach it, according to CheatCC.

You need these special ingredients before setting off on your quest: the Black Mushroom, Leoric's Shinbone, Wirt's Cowbell, Liquid Rainbow and Gibbering Gemstone — and a Plan for Staff of Herding to put it all together.

Black Mushroom: You'll need to seek out the Cathedral in Act I's Level 1 to find on of these. You'll find it on the ground, but it's not always going to spawn. If you don't find it spawning here and can't pick one up, you can go to a later quest in Act I and head to the Cathedral Gardens waypoint. Then, take Leoric's Passage to the Cathedral and look there.

Leoric's Shinbone: This is a rare drop you'll sometimes find in Leoric's Manor in Act I later on. It won't always appear in each game, but if you see the burnt logs in the fireplace, you can click on them to spawn the shinbone 100% of the time. According to CheatCC, the easiest way to get this is by heading to Quest 9's "The Imprisoned Angel" and using a waypoint to get to Leoric's Manor from there.

Wirt's Cowbell: You can buy this item from Squirt the Peddler in the Caldeum Bazaar in Act II. It will cost you 100,000 gold.

Gibbering Gemstone: You can find this as a random drop from Chiltara in Caverns of Frost's Level 2 area in Act III. You'll get it in the Ballistae fight area, attached to a random mob.

Plan for Staff of Herding: This will be a random drop by Izual in Act IV. You can play on any difficulty to get it.

Take the Staff to the Cow King's Ghost, which can be found on Old Tristram Road by the glowing red pit in Act I. You will chat with the Cow King's Ghost and the red hole will become rainbow-colored. You can click it to enter Whimsyshire. You'll get a Feat of Strength, Banner and Sigil as well. Enjoy the whimsy from here!