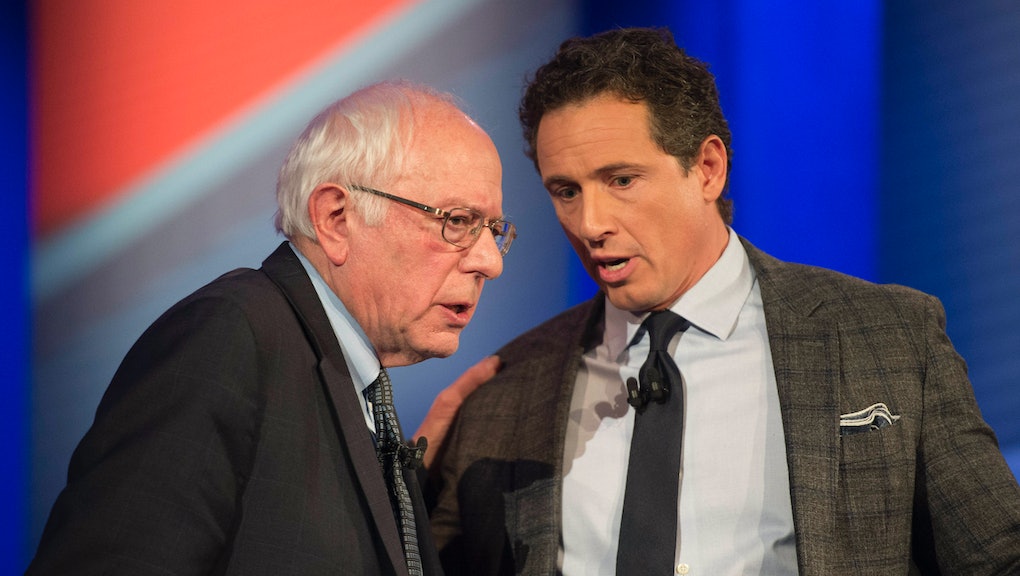 President Donald Trump starts most of his mornings these days laying into journalists and news outlets for covering him unfavorably — and on Thursday, it was CNN New Day host Chris Cuomo's turn.

The president called Cuomo "fake news" via Twitter, after panning an interview the anchor conducted with Sen. Richard Blumenthal, who was on the morning program to discuss Neil Gorsuch, Trump's Supreme Court nominee. Cuomo took issue with the president's characterization and responded to it.

In an interview with radio host Michael Smerconish about the exchange, Cuomo likened being called "fake news" to being called "the N-word."

"The only thing that's bothersome about it is that I see being called 'fake news' as the equivalent of the N-word for journalists, the equivalent of calling an Italian any of the ugly words that people have for that ethnicity," Cuomo told Smerconish on SiriusXM's POTUS station.

To be clear, the term "fake news" is nothing like "the N-word," a racial slur historically directed at African-Americans that carries with it the legacy of white supremacy and the threat of violence or death.

On the other hand, "fake news," a term popularized during the 2016 presidential election, refers to deliberate promotion of hoaxes or disinformation as though it were vetted and factual journalism.

To equivocate the word n*gger and fake news as similar insults is to trivialize the gravity of racial hatred in the U.S. Victims of lynch mobs were called n*gger. African-Americans who integrated public schools were called the n*gger. Convicted killer Dylann Roof was very fond of the word, too.

Many journalists will take any challenge to their credibility personally. It is understandable that Cuomo wants any allegation of unethical journalistic practice to be based in fact, as he told Smerconish.

"It is an ugly insult, and you better be right if you're going to charge a journalist with lying on purpose. And the president was not right here, and he has not been right in the past," he said.

After SiriusXM began circulating Cuomo's interview, it apparently became clear to the CNN anchor that comparing the N-word to the term "fake news" just doesn't hold up. He apologized on Twitter.

"I was wrong," he tweeted. "Calling a journalist fake - nothing compared to the pain of a racial slur. I should not have said it. I apologize.

"I want to thank you for calling me out for equating fake with other slurs," he tweeted. "Wasn't my intention to diminish but saying it was too much."