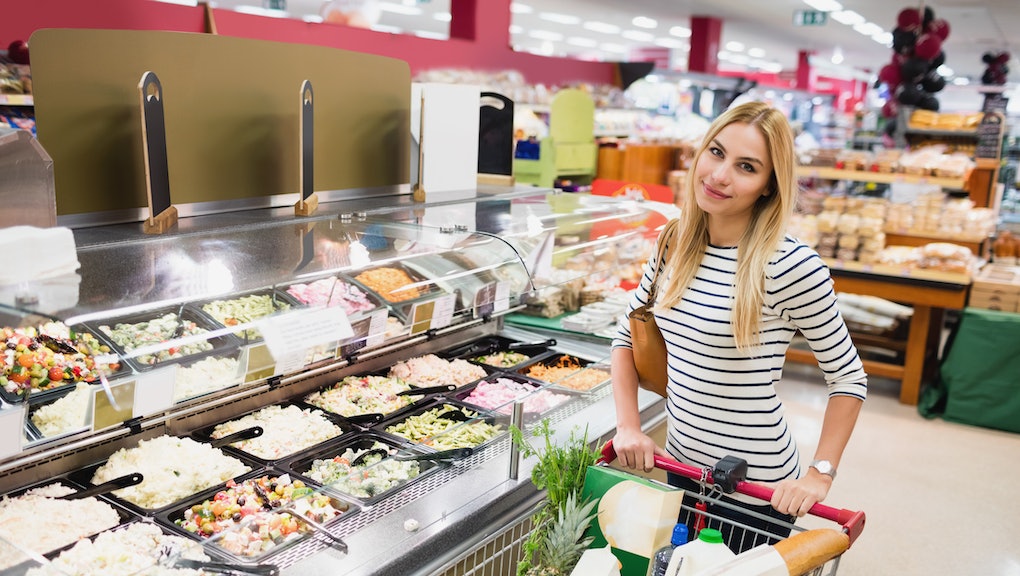 Not rich, but want a better diet? 5 ways to eat healthier food — while also saving money

Sticking to a budget is challenging — just like sticking to your New Year's resolution to eat better (more greens and whole grains, less red meat and sugar) has not been especially easy. Or successful.

It doesn't help that shopping healthy has a reputation for being expensive, a perception that (ironically) makes it easier for companies to overcharge for "health food." Whether or not it's true that you need to drop a lot of coin to get the glowing skin, heart health and fit physique promised by fresh produce, lean protein and foods naturally loaded in fiber? That's another matter.

In fact, there are clever ways to save money while still eating more salubriously. Here are five smart moves you can make to eat leaner, fitter and better — while keeping your bank account fat.

1. Be pickier about organic food

By raw averages, organic foods are 47% more expensive than conventional versions, though there's a wide range and savvy consumers can get lucky, according to Consumer Reports. For certain foods (like spinach, granola and carrots) the price premium is lower than for others — like coffee, yogurt, milk and eggs — according to Food Business News.

Since a growing number of retailers and grocers now offer organic produce, there is more competition, which is great for anyone trying to save money. Whole Foods used to be the primary resource for organics, but retailers like Kroger, WalMart and Costco have joined the organic movement, according to the Washington Post.

In a 2015 report, Business Insider found organic red seedless grapes were $1.50 cheaper per pound at Kroger than at Whole Foods. And items like organic applesauce, canned beans, coconut oil and olive oil were less costly at WalMart compared to the same organic products at Kroger, Meijer, Trader Joe’s and Whole Foods, according to a 2015 analysis by Kiplinger.

So shop around. But also know that you aren't always better off buying organic, anyway. Consumers think organic food — grown without synthetic pesticides, hormones and additives — is one of the best ways to eat healthy. But as MarketWatch points out, research hasn't definitively concluded that's true.

In particular, some foods are less likely to "need" that organic label: Some of the cleanest produce includes avocados, sweet corn and pineapples, whereas strawberries, apples and nectarines tend to contain more pesticides — and thus might therefore make you want to choose organic over conventional, according to nonprofit Environmental Working Group.

There’s nothing that will kill your buzz more than opening your produce drawer to find wilted — or worse, moldy — fruits and veggies you just dropped a ton of money to buy. The average family ends up tossing nearly $1,500 worth of food every year, according to Consumer Reports, so one way to stretch your dollar is to purchase frozen fruits, vegetables and even lean meat or seafood.

"Frozen produce is just as nutritious as fresh since the produce is picked and frozen immediately, keeping the nutrients intact," registered dietitians Tammy Lakatos Shames and Lyssie Lakatos told Shape.

In addition to your food remaining viable for longer, according to Shape, you could save money: For example, you can usually purchase a 12-ounce bag of frozen raspberries for the same price as a 6-ounce container of fresh ones.

Of course, not all frozen foods are healthy — and shoppers should take care when selecting meals because some packages add sodium, sauces or other additives (think: that "healthy" stir fried broccoli) which may derail your quest for a healthy diet.

"Take advantage of the frozen food options available," lab director Alice Lichtenstein of Tufts wrote in a university Health and Nutrition Letter. "Particularly for vegetables, they can really expand options available year-round. Just be careful of the ‘extras’ and steer clear of them."

Couponing is one of the best ways to knock some serious cash off your bill. According to NBC, money-saving mom Jenny Martin eliminated $5,000 from her annual grocery bill by using handy smartphone apps like SavingStar, iBotta, Checkout51, and MobiSave. (Another coupon app, Flipp, matches coupons to your grocery items, according Lifewire.)

Martin ventured to the grocery store with NBC to demonstrate how she uses grocery apps, slashing what would have been a $47.25 bill down to $10.30.

You do need to be careful, though. While coupon apps can certainly be money savers, users should remember they are sharing personal shopping and social media trend information, NBC noted: "Typically what they're doing is collecting data from consumers and repackaging and reselling that information to retailers," Lauren Lyons Cole of Consumer Reports told NBC. "As a consumer, you want to consider the value of that to you before you start using one of these apps — and if it's not worth the amount that you're saving, take the app off your smartphone," she said.

Many nonperishables are better priced through an online retailer such as Amazon. Save money online on snack bars, coffee, healthy beverages, pasta, baby food and specialty food such as gluten-free or non-GMO foods, according to Consumer Reports.

In addition to Amazon, you can comparison shop for the very best price by using other services, like Instacart, Google Express or Drizly, all currently offered in limited cities, but expanding, according to Epicurious.

5. Plan ahead — to actually shop smart

Taking control of your budget means planning ahead, which includes but isn’t limited to just making a grocery list. Shoppers often blame stress and strong emotions as the cause for impulse spending on purchases they later regret. So make sure you aren’t hungry before you head to the store. Eating before you shop will help curb those impulses, according to ChooseMyPlate.gov.

Also: Watch for crafty merchandising at the grocery store, as grocers will place enticing items at the checkout, where you may be bored while waiting in line and feel the need to impulse buy.

If putting a pen to paper to make your list isn’t your thing, ChooseMyPlate.gov has a handy list tool you can print out — or, Lifewire suggests, check out apps like Buy Me a Pie!, Free Shopping List Ease, Grocery IQ or Grocery Gadget. Other ways to use smart planning includes opting for the store brands, joining your favorite grocery store’s loyalty program and checking the high and low shelves: Grocers typically put the most expensive items on the shelves a eye level, according to ChooseMyPlate.gov.

Finally: Budget plenty of time for your grocery shopping trip. The less stressed you feel about getting to the next activity, the more money you'll save by poring over unit prices and labels, and finding the best possible deal — on the freshest fish with the newest package date or the greenest lettuce hiding under the pile. Happy shopping!