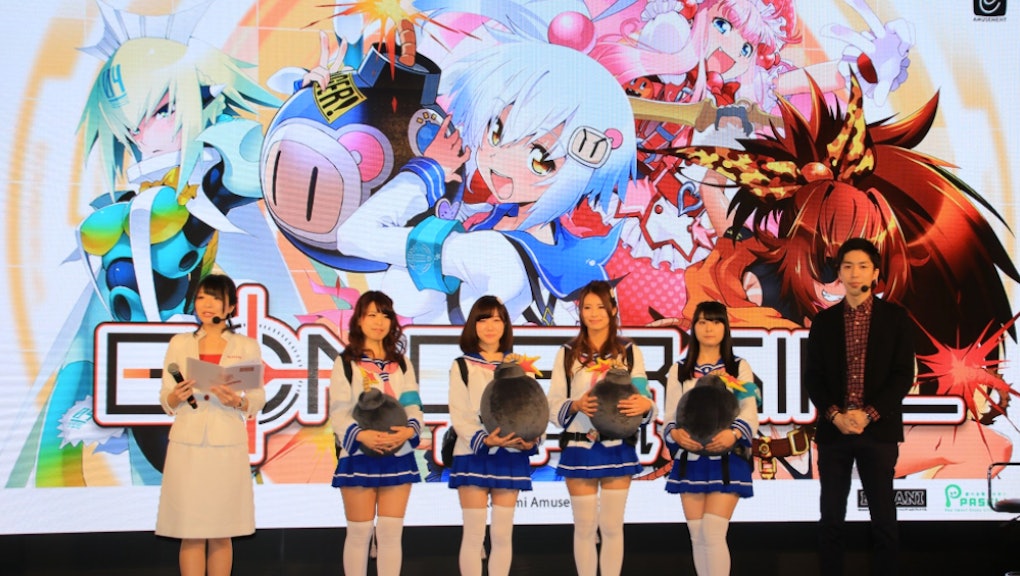 Bomberman is coming to Japanese arcades with a whole new look. In fact, you probably wouldn't even recognize her ...

Bomberman as you know him doesn't star in this game. Instead, the world is about to get acquainted with Bombergirl, an entirely new character named Shiro.

According to 4gamer, Shiro is joined by Momoko, the blocker, Oren, the high-speed attacker, and Emera, the long-range shooter, for this upcoming 4v4 multiplayer arcade game. From the footage we've been given of the game thus far it looks like there will be about 15 different characters to choose from. Each character will be outfitted with various special abilities and other awesome attacks you can use to decimate the competition.

If you lose a match, it appears your Bombergirl's clothes will undergo a little destruction as a result. So if you don't want to see your characters subsequently pantsed in front of your opponents, you'll have to stay on your toes. If you do want to see that, play horribly.

Given that Bomberman has always been a relatively innocent game with little to offend — unless you're against cartoon violence — this is a huge departure for the series. Some will undoubtedly view the destructible clothing mechanic as controversial. If Bombergirl makes its way west — like the Senran Kagura series which adopts many of the same mechanics — it could be met with some consternation.

Why I'm excited for Bombergirl

However, for me, this is the best possible way to reignite my interest in the long-stagnant Bomberman series. Bombergirl is cute and it's got plenty of characters. I'm all in!

Here's to hoping Bombergirl comes to consoles — or a handheld at the very least — in the west. Konami hasn't even announced a date for its arcade release so far. So we'll have to be a little patient for now.