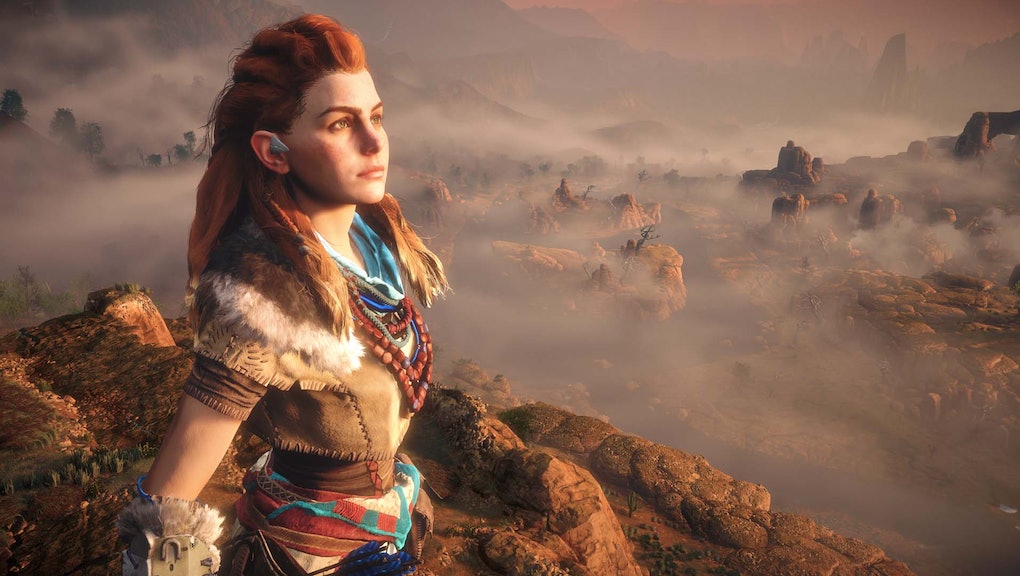 I thoroughly enjoyed Horizon Zero Dawn, A gorgeous game by all counts. It featured a lush landscape, several tear-jerking opening scenes and a narrative that drew me in even when trudging back and forth through fetch quests and get from point A for person B missives became a bit of a slog. It also featured a uniquely human lead in the form of Aloy, the fiery-haired female protagonist.

Aloy isn't a unique or engaging character just because she's a woman. Instead, she's unique and engaging and also happens to be female. Her strengths are an amalgam of what happens when a video game protagonist is designed with a nuanced personality and real, honest emotions. Simply put, she's an excellent example of good character design through and through, and I relished the time I spent with her.

Aloy isn't a unique or engaging character just because she's a woman. Instead, she's unique and engaging and also happens to be female.

Don't get me wrong. This isn't the first time we've seen fully-realized, believable characters — Life is Strange's Kate Marsh comes to mind. But in an age where it's all too easy to toss an amnesiac — one out of dozens in the landscape of video games — into whatever role you desire to watch them grow into the Chosen One or something to that effect, I always appreciate when a little more care is taken with the situation. Especially when that "Chosen One" seems to come out of nowhere.

Thankfully, that wasn't the case with our hero, who is practically hammered into nothingness before she even has a chance to blossom. In Horizon Zero Dawn, we're given a chance to watch young Aloy grow up before our very eyes from a scrappy young explorer who can't quite comprehend why the children in her village shun her and even throw rocks at her to a determined young woman.

Surprisingly, Aloy doesn't become bitter or angry. Instead, she learns to give and receive love to everyone around her as a result as a result of her difficult upbringing.

Horizon Zero Dawn also lets you inject a little more anger in Aloy's personality. You can make the choice to reply to another character's hateful words and actions with vitriol, which Aloy does with gusto, but it's clear that this isn't in her nature. While I'd typically come back at every single enemy or detractor with as much anger as I received, somehow playing as Aloy compels you to take the high road.

Playing as Aloy compels you to take the high road.

Without delving too deep into the game or revealing any spoilers, Horizon Zero Dawn's vision of the future is a harsh and unforgiving one. After suffering the harsh treatment shown to her by nearly all the village elders — save for her caretaker Rost — Aloy should by all accounts be another angry, persecuted warrior by way of Mass Effect 2's Jack, who was wronged in several ways that could be likened to Aloy's own treatment. Instead, she's able to learn and understand empathy as she grows older thanks to the lofty goal of finding out where she came from and why she was treated as an outcast.

In conversation, however, Aloy is direct and unwavering. She's occasionally hilarious, whipping out the type of one-liners that I often wish were more common in video games. She's also one of the most emotive personalities in the game, her countenance often reflecting the uncertainty and notes of strength in her conviction. She sees a direct path to an end result in nearly every situation. As a result, discovering what caused the eventual breakdown of humanity through Aloy's eyes is an even more compelling journey than it would have been otherwise.

Aloy is a great example of a protagonist who makes the game she stars in, rather than the other way around.

Aloy is a great example of a protagonist who makes the game she stars in, rather than the other way around. She's a fully fleshed out hero that deserves all the praise that's been heaped upon her so far, including PlayStation Universe's suggestion that Aloy could become a PlayStation icon, and the numerous positive reviews the game has already garnered.

Aloy will no doubt go down in the hallowed halls of video game history as one of the better heroes so far, and she absolutely deserves it.