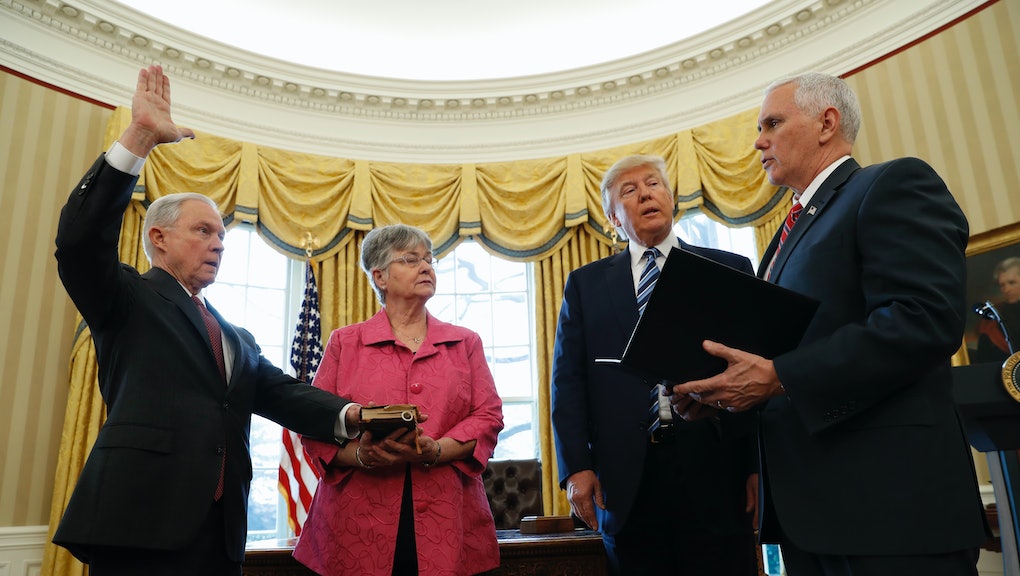 America's legal weed industry — which, according to one estimate, might be worth $50 billion by 2026 — is looking to the future with trepidation. It's still unclear whether Attorney General Jeff Sessions will bring down the federal hammer on states where the drug is legal.

Sessions' views on marijuana are far from hazy. In 2016, Sessions called weed "a very real danger" and said, "Good people don't smoke marijuana." He even joked that he thought the Ku Klux Klan was "OK until I found out they smoked pot."

But he's been less clear about what, exactly, he will do as attorney general.

On one hand, Sessions has praised the war on drugs. In a 2016 Senate hearing, Sessions said, "I think one of [Obama's] great failures, it's obvious to me, is his lax treatment in comments on marijuana. It reverses 20 years almost of hostility to drugs that began really when Nancy Reagan started 'Just Say No.'"

On the other hand, Sessions has also called some parts of Obama's marijuana policy "truly valuable," according to the Washington Post.

However, he's also expressed willingness to enforce federal marijuana laws, which forbids marijuana entirely and conflicts with laws in several states. Alaska, California, Colorado, Maine, Massachusetts, Nevada, Oregon, Washington and the District of Columbia have all legalized recreational weed, while 28 other states allow the use of marijuana for medical purposes. Some have decriminalized possession, though individuals can still face civil charges.

"I won't commit to never enforcing federal law," Sessions said during his confirmation hearing, "but absolutely it's a problem of resources for the federal government."

"We are hopeful that Mr. Sessions will follow the president's lead and respect states' rights on marijuana policy," Robert Capecchi, director of federal policies at the Marijuana Policy Project, said in a statement to Marketplace. "It would be shocking if the Trump administration attempted to steamroll the citizens and governments in these states to enforce an increasingly unpopular federal policy."