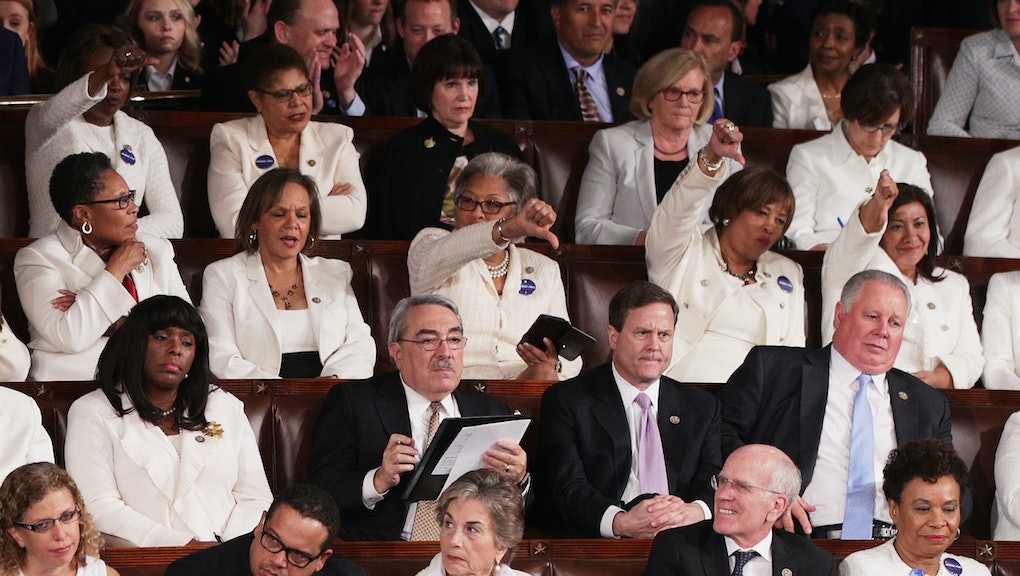 Will Trump help more women get elected to office?

President Donald Trump's address Tuesday featured a clear symbol of solidarity: Women from both parties wore white and purple — the colors of the suffragettes — in honor of our matriarchs who fought for women's right to vote.

Women have a surprise for Trump, our resident bomb-thrower-in-chief: You weren't the death knell for recruiting more women into politics, but a catalyst instead. Many of us who anticipated finally being represented by a woman in the Oval Office turned from shock to disbelief to conviction almost instantly, and are dedicating ourselves to making 2016 the last year a woman ever questions whether she should run for higher office.

Our voices are filling the streets, reverberating into the halls of Congress and cascading across social media. The good news is 2018 looks to be a game-changing election for women. Organizations that provide training and resources to help elect women, like She Should Run and VoteRunLead, are nearly overwhelmed with the more than 13,000 women who have shown interest. I marched on Washington in January and now I'm rolling up sleeves on behalf of all of you.

Before we get to work, though, I have a harsh reality check to share — the system is rigged against us (women) in the worst possible way: money. If you thought "equal work for equal pay" was a struggle, you haven't seen anything yet.

Let's say you're ready to throw your hat in the ring: At the national level, it costs more than $1.5 million to run for a seat in the House of Representatives, and $10 million in the Senate. Even then-30-year-old Rep. Elise Stefanik (R-N.Y.), who drove more than 100,000 miles across her district and is the youngest woman ever elected to national office, raised $180,000 in the first six weeks of her first campaign. (And she's beaten the average members of Congress raise each cycle, too.) The jaw-dropping sums of money necessary to be considered viable for public service discourages the "best and the brightest" from campaigning in the first place. Even millennials, the passionate leaders we need to cultivate to champion causes in both parties, say they have no interest in running for elected office because our broken campaign finance system favors wealthy donors to the exclusion of hardworking Americans. Young girls are hip to this, too — only 32 percent believe society encourages women to be politicians.

This is no way to shape the future of America.

How do candidates raise all that money? By making choices. They either spend several hours every day like a telemarketer, cold-calling donors (and in some cases ex-boyfriends), or glad-hand at rubber-chicken fundraisers — all instead of talking to constituents or studying legislation. Even groups that are meant to help women stump for political positions with early "seed" funding tend to force candidates to pass a litmus test on polarizing issues that many women might not prioritize in hopes of appealing to a broader base.

Need more proof? In early 2016, Valerie Ervin, the only African-American woman elected to Maryland's Montgomery County Council, suspended her congressional race because of money. And according to former members of Congress in both parties, endless fundraising demands lead good public servants to prematurely retire. Nobody taught me that in civics class!

One look at Capitol Hill tells you all you need to know about our current system: Just 104 women represent the country out of 535 members. Last election cycle, only 167 women competed for seats in the House of Representatives and 16 for the Senate. Women account for more than half the adult population in the United States, but they represent just under 20 percent of elected officials in Congress. And the dirty secret is that both parties are at fault for this tragedy in the greatest modern democracy in the world.

But thanks to Trump galvanizing millions of women to march and tens of thousands to hunger elected office, we can finally fix this. In order to encourage women to participate — and win — we have to reform how our elected leaders raise money. And while that's an uphill climb — only 14.4 percent of the top 100 individual donors last election cycle were women, according to the Center for Responsive Politics — it's the defining battle that will determine the future of our country and how we are represented in the halls of government. Women didn't shy away from a prolonged struggle for our right to vote, to serve in the military or to marry whomever we choose. We can't give up now just because the barriers to entry are high.

I know what it's like to fight for these causes over the long-term. I moved to Washington nearly 20 years ago after earning my master's degree in journalism, studying how political influence on K Street affected Americans' news habits and increased their civic apathy. But I was (and will forever be) an idealist and warrior. I dedicated my career to advocating on behalf of the public interest, ensuring the ones who can afford the biggest billboards or most television ads don't crowd-out everyone else trying to join political debates. My democracy has more people participating in it, not less!

As I rose up in the ranks of advocacy, with expertise in the public policy and communications sectors and nearly a decade of promoting and building tools for civic engagement at the Sunlight Foundation, I realized it always comes back to the money. It takes a lot of dollars to become an elected official — and it can take more to stay there and have sway over public policy.

But we're at a turning point where women of all political persuasions feel like democracy and our elected leaders no longer work for them. We feel like our voices and opinions are not represented in Washington or on the local level.

It is these women and you who will ensure that bitter, partisan divides and a deeply flawed political system that prioritizes money to the detriment of critically important issues will not stand for much longer. We should all do everything in our power to band together to remove these obstructions and flood 2018 and 2020 with more women running for office than any other time in our country's history.

Because, frankly, women get more shit done and it's about time we broke through the gridlock keeping the U.S. from being a country we can all be proud of again.

After all, you can't fix politics without being in politics and women in office is not a partisan issue.