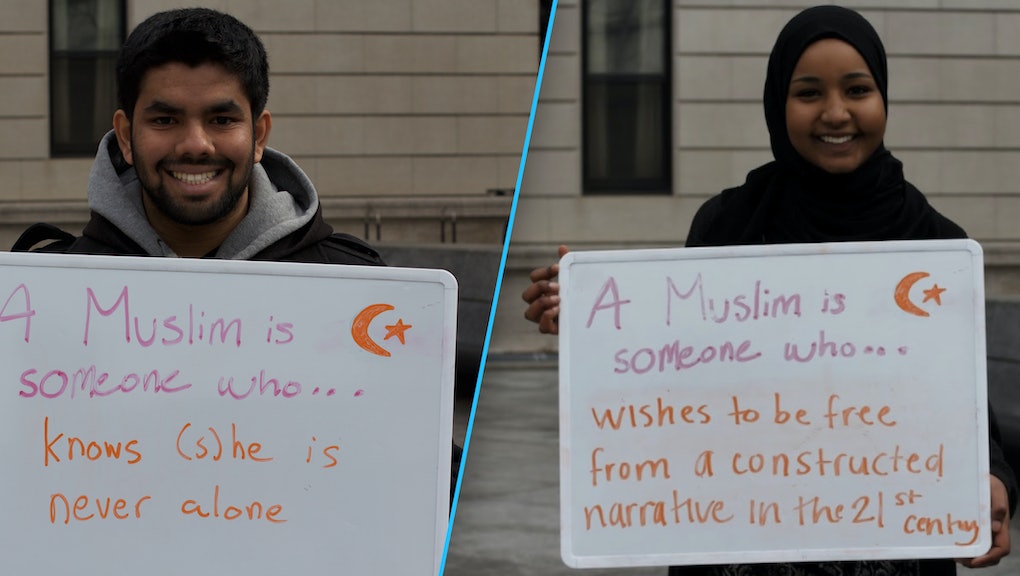 Students from Yale University's Muslim Student Association won't let President Donald Trump slander their faith and identity — so they launched a photo campaign to tell Americans exactly what it means to be Muslim.

"We realized that people are afraid to associate themselves with Islam," MSA president Abrar Omeish told Mic in an email. "Our campaign was a way to encourage others to stand with Muslims as a way to say there is absolutely nothing wrong with that. It encourages others. It brings hearts closer in a time when bigotry is being sowed in peoples' hearts for all sorts of interests — on both and every side."

After Trump's election victory, there were reports of a spike in anti-Muslim hate crimes even before Trump signed an executive order to ban all refugees, visa holders and immigrants from seven majority-Muslim countries. After massive pushback and multiple court battles, Trump has doubled down on his immigration policy with a promise to sign another order to re-implement the policy. Reportedly, the order doesn't include Iraq on the list of countries subject to the temporary travel ban.

In response, Yale's MSA group launched Islam Awareness Week — from Feb. 27 to March 3 — as an attempt to combat anti-Muslim bigotry and provide an opportunity for non-Muslims to meet their fellow Muslim students. They passed around hadiths, or sayings of the prophet Muhammad, attached with flowers to show the beauty of their religion.

The Islamic Awareness Week photo campaign features Muslims and non-Muslims alike holding up a whiteboard with the following prompt: "A Muslim is someone who ..."

"With the international Muslim ban and other pending domestic Muslim bans, we put forth the message that we're here, we've been here, we're going to stay here and we're going to do it all with our Islam because it is the very value system that brings out the best in us for our communities and those around us," Omeish added.

Omeish said her identity as a millennial Muslim American is not "an identity that needs to be reconciled or justified."

She said she finds herself critical of not only certain American politicians and policies, but also Muslim religious leaders and false deductions from Islamic clerical sources.

"Both demonstrate that my two identities [as a Muslim and an American] can be lived unapologetically," Omeish said.

Omeish noted Islam is a driving factor for many millennial Muslim American student activists. She said it's a central theme for Islam Awareness Week and the organization's photo campaign.

Here are some more photos from the MSA's photo campaign: