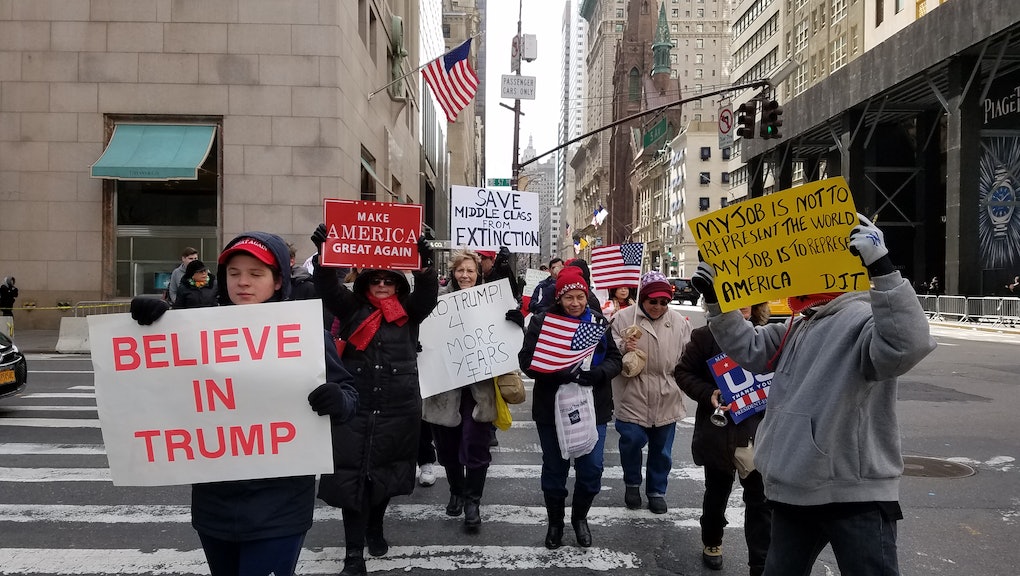 NEW YORK CITY —  In what participants described as a counter-protest against the nationwide anti-Donald Trump rallies, more than 100 supporters of the president gathered outside his Fifth Avenue skyscraper, Trump Tower, in Manhattan on Saturday, chanting "USA! USA!" and "God bless President Trump!"

The demonstration, one of the largest to convene in support of the new administration in New York since Inauguration Day, at times took on an angry tone. The assembled demonstrators railed against intelligence agencies, which they say are scheming to take down the president, as well as liberal "snowflakes" and the national media.

They were met with a smaller anti-Trump contingent across the street and sporadically crossed to engage their adversaries one-on-one. Reporters present at the rally were met with familiar cries of "fake news."

Demonstrators said they supported the president's radical new direction for the country, with many citing his hardline opposition to undocumented immigration as a key element of their support.

"I just don't like the direction we're going in with [George] Soros, and [Barack] Obama, and his silent coup that I'm hearing about lately," 59-year-old part-time marketer Susan MacEntee said. "I'm anti-establishment. I worked for IBM for 23 years. I saw what IBM did, and I couldn't stand it. The employees got screwed royally. Our jobs got offshored."

MacEntee said she was concerned that the vetting system in place for immigrants was not up to snuff.

"I pulled my weight. I worked 12-hour shifts for years and years," MacEntee added. "I don't want to see people freeloading off the system, like the immigrants. When my ancestors came over in the 1800s, they were extremely vetted on Ellis Island. ... If anybody had a disease, like TB or something, they got sent back where they came from. If they're not eligible to come into the United States, they shouldn't come in. I don't want to support them. I work."

"This president is not a racist, OK? Let me make that quite clear," Lowe, who is black, added. "When you want to protect your country, it's not wrong, is it? When he said 'build a wall,' this was not against the Mexican government."

"To protect our government, do you really think that's wrong?" Lowe continued "Oh well, let's see, why don't we let the Mexican army just march over and conquer Texas?"

"I believe in the country first. I believe he's doing what's best for the country, and until he proves me wrong, I'm here to support him," said Vasquez.

Many of the protesters said they came out specifically to denounce the resistance to Trump's agenda and called the degree of opposition unprecedented.

"We also want to reject what's happening on the Left," Margaret Garone said. "All of the protesting against him, all of the obstruction, all of the acts by Pelosi and Schumer who are running assaults against our president."

Michael Sage, a 47-year-old sanitation worker, conceded that anti-Trump protesters were simply exercising their First Amendment rights, but argued, "it can be perceived as crying wolf unless any laws or the Constitution has been broken."

Eric Roberts, a web designer, denounced intelligence community investigations into Trump's ties to Russia, which, he said, was part of an attempt to "subvert a democratic election and a democratically elected president."

"The Democratic leadership and general progressive leadership in this country is going to eventually lead to a civil war," said Roberts, 30.

"We have a president in office who's not a globalist," said Lent. "He's for nationalism. He's for America. He's for American workers. He's for supplying jobs to the middle class. And that's what this country needed sorely."

Across the way, a man in a Yankees cap who turned out as part of the anti-Trump demonstration and introduced himself only as Thomas, said he was struck by the "pathetic" size of the pro-Trump rally.

"I saw this on TV and it made me really angry to see this type of support for a man who's a sexist, a bigot, a xenophobe, a racist, every single terrible thing you want to say," he said. "I just wanted to come out here and be opposition of some sort."

Scroll down to see more images from Saturday's demonstration: