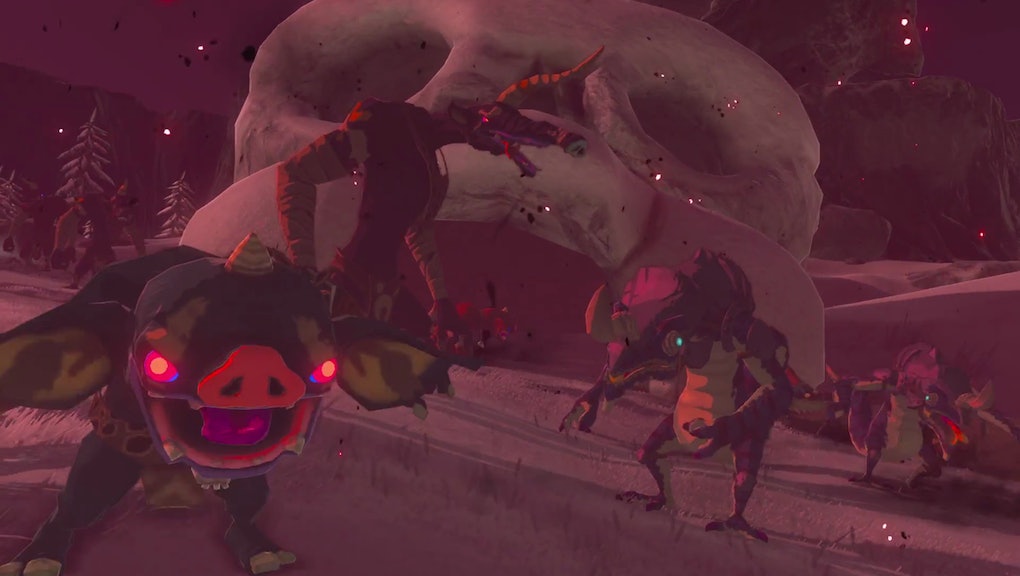 'Zelda: Breath of the Wild' Blood Moon Guide: Tips and tricks for taking advantage of it

What is a blood moon in Zelda: Breath of the Wild, and what does it do?

It's probably happened to you already: The sky turns red, and the game shows you a special cutscene making a big deal out of it. Have you encountered some strange, creepypasta-like glitch? No, it's just the blood moon, a special moment in Breath of the Wild that you need to understand and be wary of. Here's everything you need to know about the blood moon's effect on your game, Link and the environment around you.

Zelda: Breath of the Wild: Understanding the blood moon

The blood moon in Zelda: Breath of the Wild is an important part of the game to understand. Hino, who you can find at the Dueling Peaks Stable, explains it to Link: "Whenever the clock strikes midnight on unlucky nights, the sky turns blood-red. That's the blood moon." Hino also tells you Ganon's power grows stronger and "rises to its peak" during the blood moon.

The blood moon will happen sometimes after a few in-game days have passed, but only at midnight in the game. You'll know it's happening when the cutscene occurs where the land is bathed in red. It's pretty hard to miss, and the game gives you a pretty good warning about what's about to happen.

Zelda: Breath of the Wild: How the blood moon works

During the blood moon, there are important things to remember. For one, if you finish off an enemy and defeat it, it'll reanimate and come right back at you. This applies to enemies out in the overworld that you've encountered. So if you slay that bokoblin, be ready for it to pop right back up. Be extra careful and leave some space between Link and the bad guys to make sure you don't open yourself up to a surprise attack during a blood moon.

Despite the respawning enemies, there's a special boon for you out in the field. Any plants you pick up, like mushrooms and herbs, will grow right back. This is great, because you'll be able to pick more ingredients for the dishes you want to make. If you cook during a blood moon, you'll get additional random status effects added to the meals you make.

This means the blood moon is probably one of the best times to cook those special health- and stat-boosting meals with premium ingredients and bigger recipes. Once you make a meal during the blood moon, you'll get a special sound at the end of your cooking animation, which means you're going to get a special bonus added to the dish.

According to iDigitalTimes, as a result buffs and status effects can last five minutes longer, you can get three extra hearts or an additional temporary yellow heart. It might also increase your stamina gains or give in extra buff to cold/heat protection.

So the blood moon isn't all bad. Just make sure you make the best of it and avoid those powerful respawning enemies, and you'll be fine.