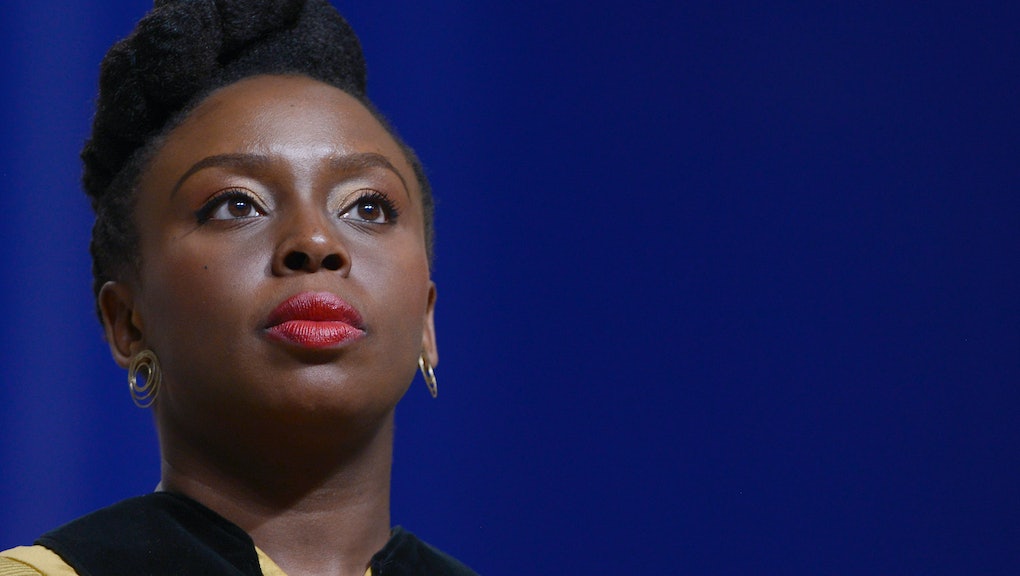 What Chimamanda Ngozi Adichie could learn from transgender women

The internet can be a deafeningly loud place.

For people who identify with a gender that's different than one they were assigned at birth -- that lesson is hammered home daily, either through insults, erasure and violence. But this time, that lesson was parceled out by beloved Nigerian feminist writer Chimamanda Ngozi Adichie. On Friday, a U.K. network posted an interview in which the author promotes a new book, and when the subject of the interview turned to where transgender women fit in Adichie's version of feminism, the author said the following:

Adichie, 39, has become arguably the most popular feminist of her generation. Her work has been turned into film adaptations, featured on Beyoncé songs, and viewed online millions of times. She's known for calmly and methodically carving apart the mass of our social reality like an archeologist and giving back to us only the parts that we need most.

But this time she was wrong. She didn't dig deep enough. Instead, she gave us the artificial exterior of something that is much more dense, and meaningful, than even she could grasp. Adichie offers up a dreaded "single story," which she once admonished because it insists that there is only one experience that can speak for all others.

Here, that story assumes that a person who's assigned male at birth lives a life of hierarchical privilege — imagine pats on the back during a baseball game or favored treatment in math and science classes — until that person chooses to "change" their gender. What Adichie misses is that trans women experience a form of gender policing and violence that people don't often recognize.

But the price for crossing society's gendered boundaries is high, and the killings of black trans women like Keke Collier, Jaquarrius Holland, Ciara McElveen and dozens of others is proof.

The beauty of the internet is that it is a platform that allows for everyone to speak and be heard. Sure, people like Adichie, whose fans number in the millions, will be heard regardless. Their platforms are huge, and their audiences are bigger. But when they try, and fail, to speak to the reality of an existence about which they know very little, the internet allows for other people to artfully take them to task and correct them.

Laverne Cox, a transgender actress who also has a huge platform, offered up an especially insightful thread on Twitter about her supposed "male privilege" growing up:

And Jarune Uwujarun, a trans Nigerian-American writer, added this: "You need to listen to trans people more than you need to speak for or about us. Anything else is further marginalizing a group of people who cannot afford to be further marginalized."

In a world where everyone is clamoring to speak, sometimes the most important thing to do is listen. Sure, there is utility in learning publicly, and being called to task by people who know more. That seems to be the case here. In a quasi-apology on Sunday, Adichie attempted to clarify her comments, but really just admitted that there are things she doesn't know.

But there are people for whom "cis" and "trans" are organic parts of their vocabularies because those words help explain their lives. For Adichie, this is relatively new knowledge. Which would be fine, as long as she — and other people who have the privilege of identifying with the gender they were assigned at birth — did the thankless work of staying quiet and listening. There is so much to learn when you do.