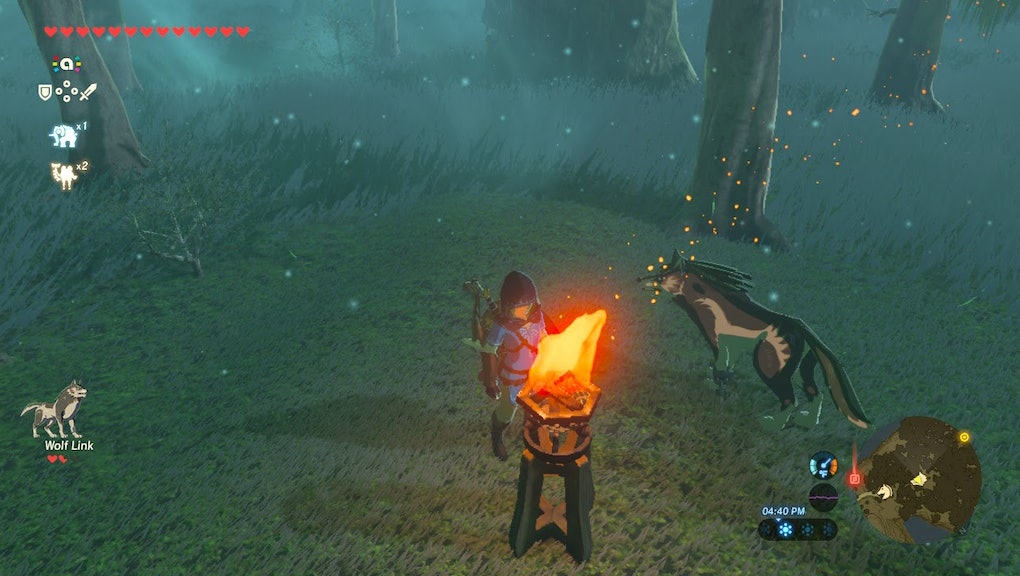 'Zelda: Breath of the Wild': Exploring Hyrule and its multicolored dogs

Zelda: Breath of the Wild features so many wonderful and whimsical things for players to discover that you could spend day after day exploring its lands and you still wouldn't see everything. Perhaps the most wonderful thing you'd see in-game, however, are all of the perfect baby angel doggos and puppers dotting the landscape.

You can feed them, get them to play fetch and even have them chase their tails. But alas! You cannot pet their innocent, precious little dog heads. What you can do, however, is check out the differently colored dogs out there and categorize them. While there aren't that many colors of dogs in Zelda, each is deserving of its own special entry here in this travelogue.

Throughout my travels in Hyrule, I seemed to come across these joyful dogs the most. Their playful demeanor, multicolored fur patterns and overall Best Dog Vibes radiated from them every time I met with one. They were always ready for me to rub their bellies and call them a good boy, even though I was only able to via the magic of my imagination.

I met this playful pooch, my favorite multicolored dog, at the Gerudo Canyon Stable, and he was thrilled to hang out with me from the beginning. I'll never forget his inquisitive stare as we locked eyes. "Pardon me, sir, do you have any food?" He seemed like a polite little scamp, as he could have just as easily trampled me and eaten all of the food on my person. He didn't. I appreciated that immensely.

Perhaps as a show of submission he rolled on his back and invited me to pet him, almost as if he understood that the limitations of Breath of the Wild would not allow me to. He settled for the knowledge that I would have rubbed that soft, sweet puppy belly if I could have, and remained content to explore the stormy countryside with me after our brief meeting.

We are forever bonded through our mutual knowledge that he is the most beautiful dog in the game, even more so than the wolf companion I would magically happen upon later on. I named him Smiley, because he looked a little bit like a psychopath when it looked like he was grinning. I still love Smiley despite the evil intentions he may or may not be hiding. All dogs are innocent though, so I can't speak to how evil he could actually be.

I happened upon plenty of dogs that looked like they had been borne from a heaping helping of caramel sauce or the fat that congeals on top of taco meat if you leave it out overnight and forget to clean it up. This particular brown dog was so beautiful all I could do was stand by and marvel at its beauty for a moment before approaching it. I wanted to make a good impression, you see.

Internally I gave the dog the name Caramel, but I was too embarrassed to share that name with this beautiful creature. Weirdly, when I approached him, he too rolled onto his back as a sign that he wanted belly rubs. I felt like a cruel companion when I couldn't give him what he wanted, but I knew from my encounters with Smiley that physical affection was never going to be a part of what we had.

Caramel really, really wanted belly rubs, though. He wasn't good for much else aside from telling me just how much he wished Nintendo had incorporated dog-petting into Breath of the Wild, but he sure was far too cute for me to tell him to stop doing that, or that it looked like he had little cute white socks on his little paws. I had tried to keep my composure and remain professional as an agent of Hyrule's salvation, you know.

Legend has it that to this day, Caramel is still waiting for belly rubs. I am afraid he will never get them, and this hurts my soul.

I wasn't able to happen upon Wolf Link in the wild like Caramel and Smiley. No, I had to free him from his amiibo prison, which he appreciated. But it made a bit of a weird conundrum when I put two Links in the same game. Wolf Link decided he was the more alpha of the pack and thus exuded a cool aura, which I noted as soon as he ran up on the camera and smirked, as seen above.

Wolf Link didn't care for or need belly rubs, being the Hero of Time and all. He was more interested in showing me how a real alpha wolf should behave. He never rolled on his back for me to rub his belly, instead leading me around as if I were the dog. Ferocious, wild, and amazing Wolf Link showed me what it was to have a companion that felt like my equal in Hyrule.

I enjoyed all the time I spent with the various canine companions in Breath of the Wild, but I still lament the fact that there just weren't enough varieties or colors to make up for the lack of interaction with them. As I make my way throughout the rest of Hyrule, I'm still thinking about my time with these angelic, wondrous puppers, and I'm hoping Caramel gets the pets he needs and deserves one day. Perhaps a kind bokoblin will do it for me.