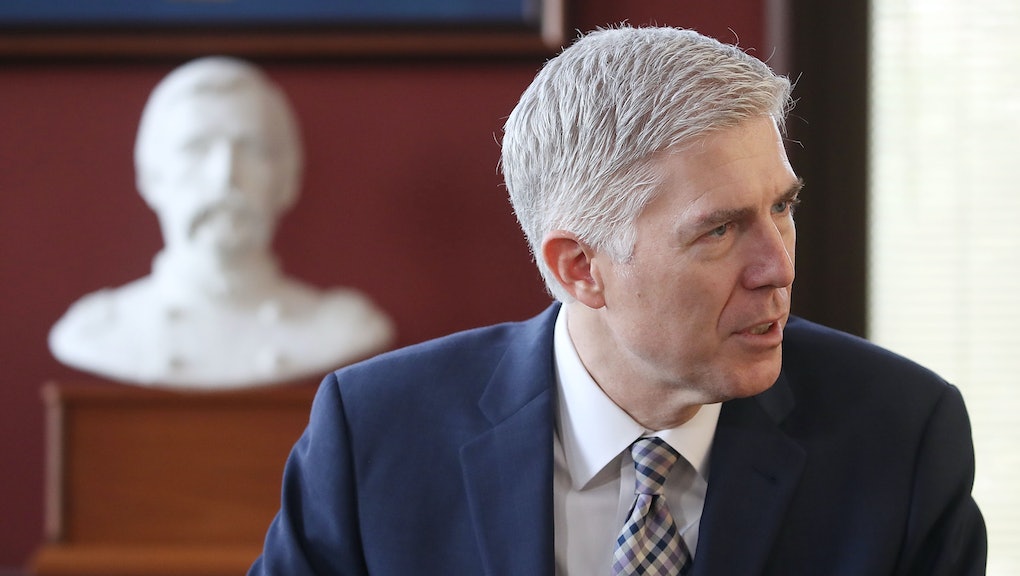 Appellate judge Neil Gorsuch — President Donald Trump's nominee to fill the late Antonin Scalia's Supreme Court seat — is a staunch opponent of the right to die, a practice sometimes referred to as physician-assisted suicide or death with dignity.

What informs his views on an individual's right to die, and how do his views correlate to existing law in the United States?

He literally wrote the book on the subject

In 2006, the Supreme Court ruled that Oregon's attorney general could not stop doctors from providing drugs to terminally ill patients who wished to die. In response, Gorsuch, who was unanimously confirmed to the 10th Circuit Court of Appeals that same year, wrote a book arguing against assisted suicide from a moral and legal — but not, interestingly, a religious — standpoint.

Titled The Future of Assisted Suicide and Euthanasia, it became "the book" on assisted suicide, according to the Washington Post.

In part, Gorsuch wrote that "all human beings are intrinsically valuable and the intentional taking of human life by private persons is always wrong."

Gorsuch expressed concern that right-to-die legislation would "introduce the real possibility that the lives of some persons (very possibly the weakest and most vulnerable among us) may be deemed less 'valuable,' and receive less protection from the law, than others." He also worried that opening the door to assisted suicide could lead to people being killed "without their consent due to mistake, abuse or pressure."

According to the Washington Post, Gorsuch's book levied criticism at Judge Richard Posner, who currently sits on the U.S. Court of Appeals for the Seventh Circuit. Posner has previously supported the idea of physician-assisted suicide, arguing the government "should not interfere with a person’s decision to take his or her own life."

Gorsuch wrote that views like Posner's would "tend toward, if not require, the legalization not only of assisted suicide and euthanasia, but of any act of consensual homicide."

There’s no federal law guaranteeing the right to die, but assisted suicide is not deemed illegal at the federal level, either. Five states — California, Colorado, Oregon, Vermont and Washington — have passed laws permitting the practice. Montana allows it by court decision, and 25 additional states will consider right-to-die laws in 2017.

Given how contentious the issue has become, any one of those laws could potentially reach the Supreme Court for review. Should Gorsuch be confirmed to the nation's highest court, it stands to reason he'll continue his opposition to the practice there.