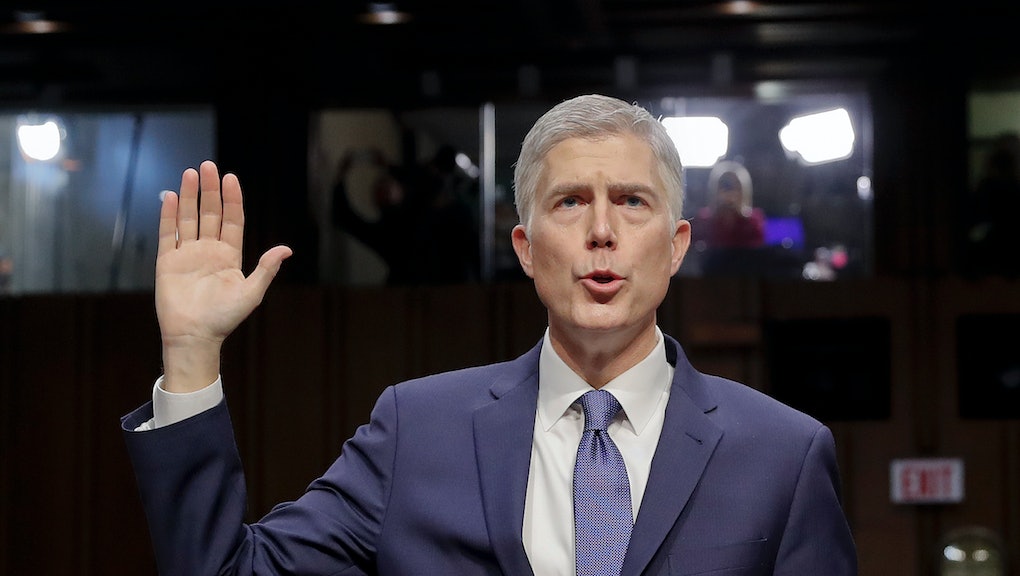 Would Neil Gorsuch move the Supreme Court on abortion?

With President Donald Trump's nomination of noted conservative Neil Gorsuch to the Supreme Court, reproductive rights advocates are worried that the court may soon tip to the right on the issue of abortion.

They may have cause for concern, but there are several reasons the court — even if Trump nominates more than one justice during his presidency — may not flip.

Not much has changed, legally, since 1973, when the court decided Roe v. Wade.

As Claire Suddath wrote in Bloomberg,

In 'Roe v. Wade,' decided in 1973, the Supreme Court found that a woman’s decision to keep or terminate a pregnancy was her own to make, in consultation with her medical provider, and was legally protected by a constitutional right to privacy. The 7-2 decision nullified laws that had criminalized abortion in 46 states, and it fueled legal and political battles that still show no sign of abating.

Though the science around when a fetus becomes viable has developed since 1973, a woman's decision to keep or terminate her pregnancy (with some exceptions) is still hers to make.

In 1992, in Planned Parenthood v. Casey, the court upheld the core principle of Roe v. Wade — that a woman has the right to choose to have an abortion without "undue burden" before fetal viability.

One of the questions the justices considered in Casey was "whether Roe's premises of fact have so far changed in the ensuing two decades as to render its central holding somehow irrelevant or unjustifiable." They found they had not.

The court leans heavily on precedent. To reverse 40 years of established law would be a stark about-face that could damage its credibility as a nonpartisan institution. As Julie Rikelman, litigation director at the Center for Reproductive Rights, told Vox last year, “respecting precedent is a huge part of maintaining the integrity of the institution.”

On the campaign trail, Trump promised to nominate justices who would overturn Roe. The problem is that, if the justices he appoints do that, they'll run the risk of appearing as political actors. It's a bad look for the Court, which values its apolitical status.

One thing that has changed over time is the definition of "undue burden." The court didn't define it in Roe v. Wade nor in Planned Parenthood v. Casey. As a result, states have crafted myriad laws designed to reduce abortion access, from requiring parental assent and spousal assent, to requiring 24-hour waiting periods before having an abortion, to requiring fetal remains be cremated and buried.

The court has found some of those laws constitutional and others undue burdens on women. To abandon the "undue burden" standard would be another stark reversal for the court.

Thus, we come to Gorsuch: Considered by some to be more conservative than Antonin Scalia, whom he is nominated to replace, conservatives see in Gorsuch a justice who could tip the court against abortion after 40 years. But while Gorsuch may generally lean conservative, his specific views on abortion are unknown.

The closest he's come to writing about the issue was when he wrote about his opposition to another biomedical issue, assisted suicide, in his book, which was published shortly after the Court ruled Washington state could not prohibit doctors from assisting their patients in suicide.