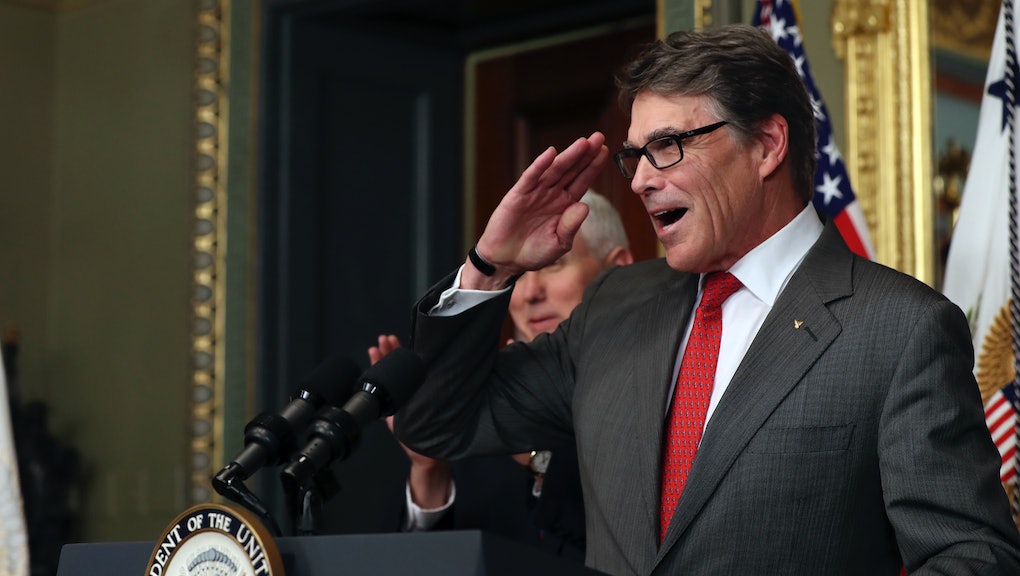 Rick Perry: How a gay student body president at Texas A&M is taking on the US energy secretary

A student body president at Texas A&M is fighting back against U.S. Secretary of Energy Rick Perry.

The former governor of Texas waded into student politics at his alma mater, Texas A&M University on March 22 with an op-ed published in the Houston Chronicle. In it, Perry argued that the election of gay junior economics major Bobby Brooks, who didn't win the popular vote for student body president, made "a mockery of due process and transparency."

A cabinet-level Trump administration official's involvement in a local student political matter drew a national spotlight to the race.

GLAAD, the LGBTQ advocacy group, came out in defense of Brooks, who will be the first openly gay man to serve as student body president at the traditionally conservative Texas school. "Young people like Bobby Brooks are the future, and should be encouraged, not harassed," Sarah Kate Ellis, President and CEO of GLAAD, said in a statement. “I hope Secretary Perry takes this opportunity to meet with Bobby and learn what this student already knows — that diversity and inclusion are among our greatest strengths."

"Brooks will also be a featured guest at the 28th Annual GLAAD Media Awards on April 1," the statement continued.

Brooks' race was close, but he lost to senior university studies major Robert McIntosh, 51.08% to 48.92% in the fifth and final voting round, according to the final tally. However, more than a dozen reports of voter intimidation and one report that McIntosh had failed to file either receipts or "fair market value" forms for items used in a campaign advertisement — namely, glowsticks — were filed anonymously in the final hours of the campaign, according to the Battalion, the school's student newspaper.

A student court threw the voter intimidation reports out, but found McIntosh had indeed violated regulations by failing to declare the glow sticks. The court upheld the student government's decision to disqualify McIntosh.

"While the casual observer might find the decision of the Commissioner and this Court unreasonably officious ... interpretation and application of the law is the Court’s sole charge in the Judicial Branch," the student court wrote in its unanimous decision.

Perry, who graduated from Texas A&M in 1972, was not pleased with the court's decision. "In its opinion, the Judicial Court admitted that the charges were minor and technical, but, incredibly, chose to uphold the disqualification, with no consideration given to whether the punishment fit the crime," he wrote in the Chronicle. "The desire of the electorate is overturned, and thousands of student votes are disqualified because of free glow sticks that appeared for 11 seconds of a months-long campaign. Apparently, glow sticks merit the same punishment as voter intimidation."

Perry also speculated that the court's decision had more to do with Brooks's sexual orientation than rules and regulations. "It is difficult to escape the perception that this quest for 'diversity' is the real reason the election outcome was overturned," Perry wrote. "Does the principle of 'diversity' override and supersede all other values of our Aggie Honor Code?"

The disqualified McIntosh told the student newspaper he was "thankful" for Secretary Perry's support. Meanwhile, he has hired a College Station, Texas, area attorney, who has petitioned to depose three students involved in the decision "to investigate whether the true reasons for [McIntosh's] disqualification and establish that those reasons are based on the fact that he is a heterosexual, white, Christian male."

Brooks responded to Perry with his own op-ed in the student paper. "I would like to invite you to come home to Texas to meet with my team and me as we take office later this month to discuss how we can work together to achieve our common vision," the 21-year-old wrote.