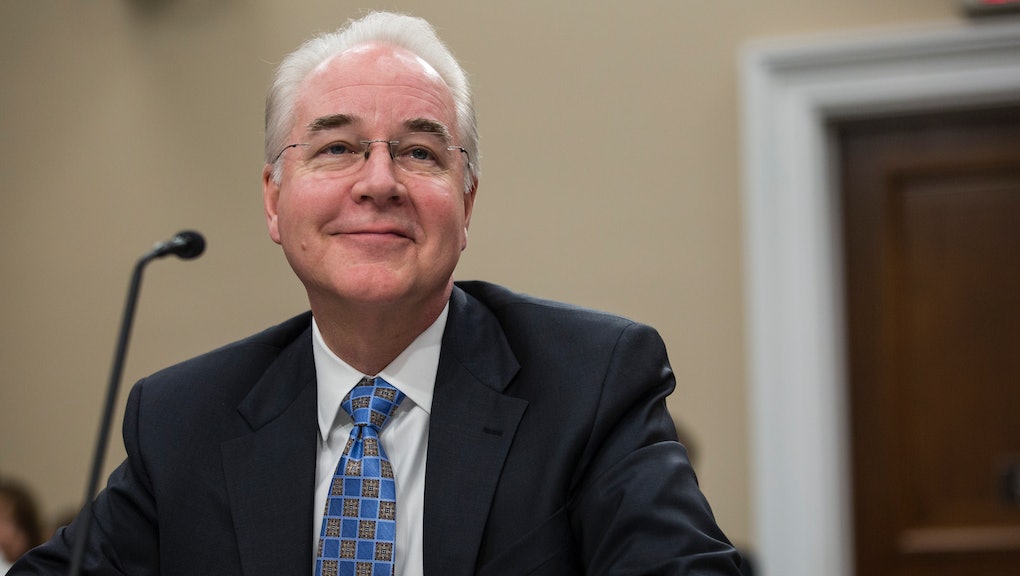 How Tom Price and the Trump administration could still gut Obamacare

Last Friday, congressional Republicans and President Donald Trump failed spectacularly to repeal the Affordable Care Act, better known as Obamacare. It was a happy day for Democrats, who openly cheered the failure of Trump and his party to undo one of former President Barack Obama

But the Trump administration still has tools at its disposal to greatly reduce the scope and effectiveness of Obama's health care law.

Trump chose Tom Price, a longtime Georgia legislator and fervent opponent of the ACA, as secretary of health and human services. And, as HHS secretary, Price's biggest task will be the enforcement (or nonenforcement) of the law.

"An administration committed to undermining the ACA is really only limited by its imagination," Jill Horwitz, a law professor at UCLA, told Dan Gorenstein of Marketplace. "The ACA, the legislation, was the skeleton, and the Obama administration put the meat on the bones," she said. "And if the Trump administration wants to undo the ACA, it can work systematically to take the meat off the bones."

There are a number of ways Price could go about doing that.

Price endorsed the piecemeal strategy on Twitter in March.

HHS could redefine "essential health benefits," which the ACA requires all insurance plans to provide, to cover fewer things. As part of their unsuccessful push to repeal and replace the ACA, House Speaker Paul Ryan and other Republicans argued that Americans should be allowed to purchase plans without essential benefits (which would be cheaper) if they think they won't need those benefits.

But that argument came under fire quickly, and the threat of removing essential benefits coverage caused moderate Republicans in the so-called Tuesday Group to back away from the bill.

Price, an outspoken opponent of abortion, could also decline to enforce the law's contraception mandate, which requires all insurance plans to provide coverage for contraceptives. Republicans say it violates some Americans' religious freedom.

Most importantly, Price could also opt not to defend the law against a suit congressional Republicans filed in 2014. The suit argues that the Obama administration's use of Treasury Department funds to cover ACA subsidies to insurers was illegal. If Trump drops the defense, "That would cause a blow up,” Gary Claxton, a vice president of the Kaiser Family Foundation, told Talking Points Memo. "Insurers would either jack up premiums or leave the marketplace entirely," leaving many without coverage, TPM reports.