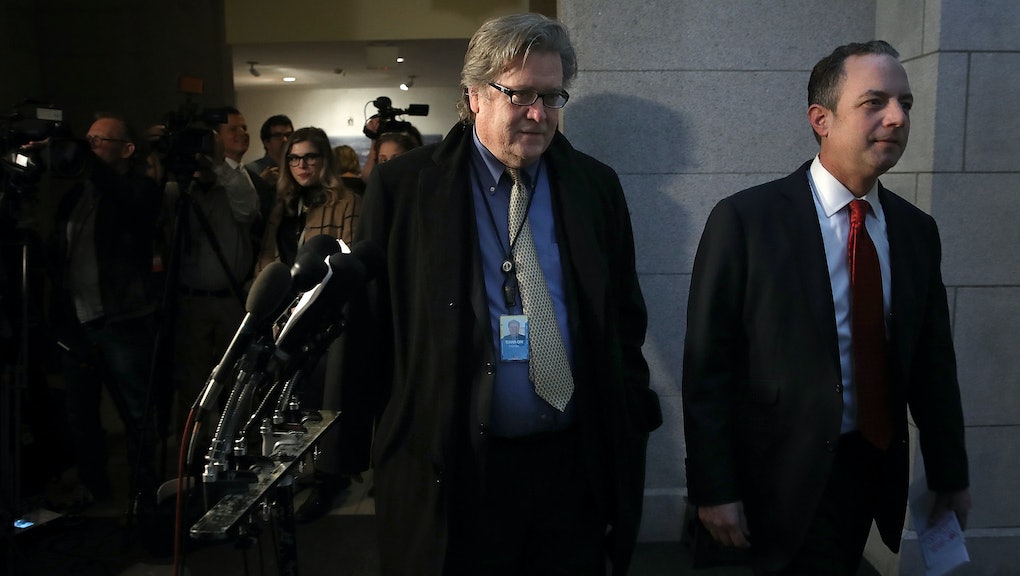 Are Steve Bannon and Reince Priebus losing influence in the Trump White House?

In the earliest days of the Trump administration, there appeared to be two basic lines along which power flowed.

But recent turmoils have complicated the existing factions and created uneasy alliances for power in the Trump administration.

Bannon and Priebus vs. Trump family

The Bannon and Priebus sides often clashed and competed for the president's attention. Now, however, it appears a third faction has emerged — Trump's eldest daughter, Ivanka, and her husband, New York real estate scion Jared Kushner. Their addition to the mix has reportedly seen the fortunes of both the Priebus/Ryan/Pence and the Bannon/Miller factions wane.

The first blow struck was against Bannon and Miller, and it came in the form of Trump's abortive immigration ban. Reportedly conceived in secret by Bannon, Miller and a few others, it was rolled out in haste and, as a result, met challenges in courts across the country.

A federal judge quickly halted enforcement of the ban, resulting in the first of the Trump administration's black eyes. A second iteration of the ban, which Miller said would produce "the same, basic policy outcome" as the first, was also struck down. Trump did not issue a third version of the order.

The second blow was against the Priebus/Ryan/Pence camp, and it came when Trump tried, and failed, to repeal and replace the Affordable Care Act. The bill Ryan and company crafted for Trump, called the American Health Care Act, was lambasted from both sides of the aisle.

It didn't repeal enough of the ACA for conservatives, and it repealed too much for moderates, who worried that futzing with Medicare and Medicaid, two expensive but popular programs, could hurt them. The Congressional Budget Office said it would see 24 million more people uninsured than under the ACA. Republicans balked, and Ryan pulled the bill before it could even be voted on. When the bill was pulled, Breitbart, Bannon's former employer, tried to pin the blame on Ryan and Priebus, which Trump seemed content to allow.

So far, the president's eldest daughter and her husband make up the only bloc within the Trump White House that hasn't experienced a huge, public failure.

As NBC News put it, "it's becoming clear that blood and family have trumped ambition on Pennsylvania Avenue with first daughter Ivanka Trump emerging as a powerbroker in her own right, along with her husband Jared Kushner."

The president has given Kushner a difficult set of tasks, which makes any successes that much more impressive, but also sets the president's son-in-law up for failure. Part of Kushner's job will be to lead a program designed to overhaul the government to run more like a business. He's also been tasked with negotiating a lasting peace in the Middle East and solving America's opioid epidemic — tall orders for the most experienced negotiators and policymakers, which Kushner isn't.

Also included in the Ivanka/Jared clique are Gary Cohn and Dina Powell. Cohn was the president of Goldman Sachs before becoming director of the National Economic Council, while Powell was a Goldman exec before becoming deputy national security adviser for strategy.

Cohn and Powell oppose Bannon on immigration policy. Both former Wall Streeters are in favor of more welcoming immigration policies than those advocated by hardliners like Bannon and Miller.

To counter the rising influence of Ivanka and Kushner, the Bannon and Priebus factions have reportedly banded together, the Washington Post reports.

"An unexpected political marriage has formed between Bannon, with his network of anti-establishment conservative populists, and Priebus, who represents a wing of more traditional Republican operatives.

Dominating the emerging turf war requires a win for Bannon and Priebus, which they don't appear on track to get. The president's next big legislative fight is expected to be tax reform, and he's already encountering problems, if his Twitter feed is any indication.

If Priebus can't corral conservative Republicans, tax reform won't pass. And if tax reform doesn't pass, the Bannon/Ryan alliance will face an uphill battle against the president's daughter and her husband.